Another weekend is upon us and more CGB Hall of Fame voting is to be done. Our match-up today comes out of the Pappy Waldorf Region and features two Cal football legends from the 1980's, Hardy Nickerson and Bruce Snyder.

Hardy Nickerson was a fearsome linebacker that roamed the Golden Bear defense in the mid '80's and went on to have a long and successful career in the NFL. I had the chance to meet him once when I was a kid before a Bucs game in Tampa and he was an incredibly nice and warm gentleman. Around Cal he is now known not only as a legend on the field, but also as the father of Hardy Jr., one of our highly touted young linebackers.

On the other side is Bruce Snyder, who was the Cal coach for the late 80's and early 90's and resurrected what was a pretty dismal program at the time, leading the Bears back into the national spotlight. My personal memory of him was that he was the coach when my Dad started taking me to Cal football games, and it really hurt me when he left for Arizona State (which I suspect might hurt him in this voting). But nonetheless, he was a great coach and really did a lot for Cal football.

As this is a 2/15 match-up I suspect this will not be all that close, in addition to the fact that there might be some leftover resentment from Snyder's departure (which I have gotten over having learned that it really wasn't totally his fault). Either way, I think Hardy will advance. The winner will take on Andre Carter in the next round. You can check out the full bracket here if you are so inclined. As always, voting ends on Friday. GO BEARS! 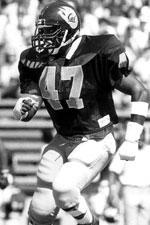 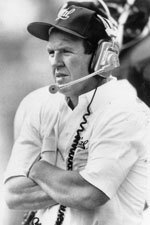 From the incredible 2011 Profile Ohio Bear put together:

In December of 1986, Cal Athletic Director David Maggard hired then-Los Angeles Rams assistant coach Bruce Snyder to take over as head football coach after the largely unsuccessful tenure of Joe Kapp. Prior to accepting the Cal job, Coach Snyder had modest experience as a head coach: he had spent 1976 to 1982 as the head coach at Utah State, where he had rebuilt a program that had been down and out. Perhaps it was his experience at rebuilding that made Snyder a good fit for the Cal job: after a disastrous 2-9 season in 1986, to say that the Cal football program needed a rebuild was an understatement.

Through five seasons, Snyder compiled a 29-24-4 record at Cal and was the first coach to lead the Bears to two bowl wins. Unfortunately, and to the universal dismay of Cal fans, the epic 1991 season was Snyder's last as Cal head coach. Arizona State, which had fired Larry Marmie after the season, lured Snyder away with a lucrative contract offer after the Citrus Bowl. New Cal athletic director Bob Bockrath, who assumed his duties just a few months before the Citrus Bowl triumph, is generally regarded by Cal fans as having done too little to retain Coach Snyder. In 2004, in an interview with the San Francisco Chronicle, Snyder still felt regret about how his Cal tenure ended after having reached what was, at the time, the highest point of his head coaching career.

The relatively short five-year tenure of Snyder as Cal coach does not, however, diminish his legacy as one of Cal's best coaches of all time. Indeed, the fact that five Cal Athletic Hall-of-Famers played for him (MIke Pawlawski, Sean Dawkins, Russell White, Troy Auzenne, David Ortega) is a testament to his coaching as well as to the players' ability. Coach Snyder's greatness is further illustrated by the way he and his staff had a knack for finding the diamonds in the rough when it came to recruiting. The most striking example was Pawlawski, who was not recruited heavily as a quarterback coming out of Troy High School in Yorba Linda, Calif. Pawlawski played only one season as a high school quarterback and put up modest numbers in that year; yet, Snyder and his staff saw something in Pawlawski that led them to offer him a scholarship. One publication called Pawlawski the "worst recruit in the Pac-10" in 1987; Pawlawski had the last laugh as a senior in 1991, when he was the Pac-10 co-offensive player of the year for a team that finished in the top 10 in the national polls.

Coach Snyder would go on to have a 9-year run at Arizona State, where he went 58-45 with four bowl appearances (one bowl win) as coach of the Sun Devils. Most notably, Snyder's 1996 ASU team went undefeated in the regular season and were within just a few seconds of a national championship before falling 20-17 to Ohio State on a late touchdown in the Rose Bowl. Snyder was the 1996 Pac-10 Coach of the Year and won several national coach of the year honors that year. To add insult to the injury of losing him to a conference rival, Snyder's teams went 7-2 against Cal.