Is there any finer sight than a Cal team holding up a Pac-12 Championship banner? Well, yes -- the sight of that team holding up a national championship banner. But let's take one thing at a time. On a beautiful Sunday morning last weekend, the #1 ranked Cal women's crew team was totally dominant in the Pac-12 Championships. Winning conference championships is nothing new for the Bears. They have won five straight, and eight of the last nine. But this is a young Bear team, which struggled at the start of the season. In early April, the Bears finished only fourth in the San Diego Crew Classic, which was won by USC. In fact, #3 ranked USC was supposed to pose a big challenge to the Bears in this year's conference championships. Spoiler alert: USC finished fifth. Join me after the jump for tons of photos and video of a great morning for the Bears at Lake Natoma, just outside Sacramento.

Before going to a rowing regatta it's a good idea to figure out how the scoring works, so you know what your team needs to do to win. I learned this last year at the women's NCAA championships, when I was very confused. Fortunately Norcalnick was there and figured it out for us. This year, Nick bailed on us. Some bogus excuse about Mothers' Day. But lucky for me, the Pac-12 put a cheat sheet online explaining the scoring. It's all about points. There are four events. First, there is the Novice 8 (8-oar boat with first year rowers). The first place boat gets 3.5 points, the second place boats gets 3 points, and so on, down to the seventh place boat, which gets 0.5 points. Next comes the Varsity 4 (4-oar boat with experienced rowers). The scoring there is 7 points for the winner, on down to 1 point for seventh place. The third event is the Second Varsity 8 which, as the name suggests, is the school's second-strongest 8-oar boat. The scoring there starts at 14 points and goes down to 2 points for seventh place. And, finally, there is the Varsity 8, featuring each school's best rowers. The points available here are huge: 21 for the winner, 18 for second, etc., on down to 3 points for seventh place. As long as a team stays close in the early races, it has a chance to win the whole thing with the Varsity 8.

Here's the loot the Bears were aiming for: the team trophies, the trophies for each event, and the individual medals.

A team doesn't have to win all the races to win. It's all about who ends up with the most points. A team can actually come in second or third in all the races and win the championship on points, depending on what the other teams do. In fact, despite Cal's dominance in women's crew over the last decade, the Bears have never won all four races in the conference championships. But this year they decided to make it easy on us non-math majors. This year there was no need to pull out the calculators and carefully figure out point totals. The Bears did it the simple way: they won every race

The first race of the day was the Women's Novice 8. It's helpful in watching the video to know that the boats are placed in lanes 1 through 7 based on their ranking in that event, with the highest ranked team being in the lane closest to the spectators. (And let me apologize in advance that the video is not as smooth as I would like. This was the first time out for my fancy new camera, and shooting moving targets at extreme distance turned out to be a little tricky. Not to mention that I kept forgetting where some of the buttons were! But it's watchable, and I think the video gets steadier as the morning goes on.)

Cal's Novice-8 team, after receiving their gold medals and the championship trophy for their event. Guess which one is the coxswain?

On to the Varsity 4 event. Cal completely dominated this one, with an open-water lead over the entire field from beginning to end.

And here are the members of the Varsity 4 team receiving their gold medals:

The next race was the Second Varsity 8. Unlike the first two races, the Bears were not favored in this one. #7 ranked UCLA was the favorite and was placed in lane one. But the Bears were set to challenge from lane two, and they never gave the Southern Branch a chance. Cal led from the beginning, while UCLA was left to battle it out with #12 ranked Stanford for second -- which turned out to be a photo finish.

The photo finish for second went to Stanford, leaving favored UCLA in third. The finish: (1) California; (2) Stanford; (3) UCLA; (4) Washington; (5) WSU; (6) USC; (7) OSU. Cal's lead in points was extended to 24.5 points over second place UCLA, which had 18. Stanford and Washington were tied for third with 16. But with the last race being worth 21 points to the winner, there was still a chance for someone else to slip in there and get that title away from the Bears.

The Varsity 8 was no sure thing for the Bears. In fact, USC was favored, having gone undefeated in that race all year. And both USC and Washington had finished ahead of the Bears in the Varsity 8 at the San Diego Crew Classic on April 1. By my calculations, though, if the Bears finished in at least third place, they had the championship. But the Bears said: Third place? You must be joking! The race got off to a strange start when it was called back for a false start by one of the teams, although we weren't told which one. (Rumors that it was the Cal offensive line are unconfirmed.) But the Bears refused to be distracted and, in the closest race of the day, they took care of business.

USC put on a pretty amazing burst at the end to pull close and make it a photo finish for second and third. But the Bears weren't concerned, because they weren't messing around with second or third place this day. The finish: (1) California; (2) USC; (3) Washington; (4) UCLA; (5) Stanford; (6) WSU; (7) OSU.

Cal's Varsity 8 enjoying that championship feeling after the race. 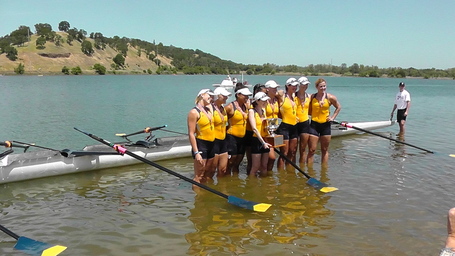 And the Varsity 8 with their gold medals and trophy.

And after all that racing, it was time for some championship trophies:

And, of course, it's not really a championship unless you get the t-shirt:

And when the Pac-12 Champion Bears had their t-shirts on, a small white dog joined them on the victory stand, seen here in the arms of the Cal rower at the upper right. I believe that this was Jill Costello's dog, which she had with her when the Bears finished second in the 2010 NCAA Championships, just weeks before Jill died of lung cancer. (I don't know this for certain, but I can think of no other reason the team would have brought the little white dog onto the victory stand with them.)

Cal coxswain Jill Costello lifts her dog in celebration at the 2010 NCAA Championships.

Congratulations to the University of California Golden Bears 2012 Women's Crew Team, the first-ever Pac-12 Champions. And good luck in the NCAA Championships!