We are finishing off our Hall of Fame voting this weekend with another 1/16 match-up. This one features one of the most well known and beloved Bears in recent memory, Jorge Gutierrez, against tennis star Susie Babos.

It would be tough to say anything about Jorge that has not already been said in the past few months as his Cal career came to a close. He was an incredible player and leader and embodied everything that a Golden Bear ought to be. On the other hand, I suspect that Susie is not all that well known, or at least she was not to me. However, as the first ever Golden Bear to win a singles tennis championship she ought to be someone you are at least familiar with. So take a read and learn something new.

Jorge is a number 1 seed and rightfully so. He'll be tough to beat not only in this match-up, but in this entire tournament. But Susie has shown her resilience on the court, so we'll see what happens. This is the top match up in the Brick Mueller Region and the winner is going to move on to face Robert O. Briggs. You can take a look at the full bracket here. The full write-ups are after the jump and voting will end on Friday. GO BEARS! I'm pretty sure I speak for more than just myself when I say that Jorge is one of my favorite Cal athletes to watch, not only in the past few years, but also in my lifetime. I always felt like no matter whom we were playing or how the game was going, as long as Jorge was there we had a chance. I knew that he would never quit and would be right there to take a charge, dive on the floor for a loose ball, or hit a huge shot at the buzzer. Simply put, he was an exciting player and one that embodied everything that Cal athletics represents. It was a privilege to watch him play and I'm glad he was a Golden Bear.

When we first watched Gutierrez, it was hard not to love him. Jorge was just a high energy bundle that wasn't terribly focused, but it always seemed to spark the team when he was really able to get into it. Here was a guy who struggled to dribble, struggled to pass, struggled to shoot, and there he was locking down James Harden, spearheading a double digit comeback against the Furd, dunking and throwing an and-one layup high in the air to clinch a Pac-10 title.

Love does funny things to you. It makes you forget about turnover rates and field goal percentage and free throw rate because numbers be damned, watching Jorge was a joy. You discard those things because you like to imagine you can play with that sort of wild desperation, put that much effort into something you love that much. With that type of effort, that type of confidence, and just enough skill, anything is possible.

I've watched Cal basketball seriously for four years, and having Jorge be part of those experiences made it not just worthwhile, but meaningful. Watching almost every big momentum-changing steal, every forced turnover; every grimace; every sell of a call, every race he made toward a basketball regardless of what might be in the way, every time he went to the ground and we held our breath, until we realized it was Jorge and he'd be up in thirty seconds because that's who he was, every little inch he refused to give to his opponent, every chestbump from an inspired teammate, every spontaneous standing ovation we gave him for some random Jorge thing he'd do, every little thing he did do that we thought he couldn't do--those moments added up.

Via his Official Cal Bears profile:

The first recruit signed by head coach Mike Montgomery at Cal (mid-May 2008), Gutierrez is a versatile guard who can play several positions on the court ... proved to be an invaluable reserve coming off the bench ... consistently one of the hardest-working players whenever he's on the court ... named the team's Defensive Player of the Year last season.

Via the announcement about winning Pac-12 POY:

Senior guard Jorge Gutierrez, the heart and soul of a Cal team that chased the conference championship until the final day of the season, became the first player named Pac-12 Player of the Year and Defensive Player of the Year on Monday.

"Jorge just wins, and he has done that for us for four years," Cal coach Mike Montgomery said. "Coaches appreciate that part of it, without getting stuck on numbers or the spectacular athleticism. I'm not trading Jorge for anybody."

Also be sure and check out this Sports Illustrated profile on Jorge. 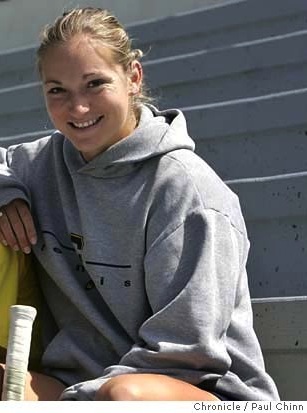 Susie Babos was destined to be a tennis star. Her father is Hungarian tennis legend Csaba Babos and he groomed her to be a top player from early on in her childhood. She came to Cal from Hungary in 2004 and immediately made an impact on the women's tennis team, earning an NCAA Tourney berth and winning her first match. She finished her freshman season with a 33-10 overall singles record, playing at No. 1 singles exclusively for the Bears and ending the year ranked No. 6 nationally. She was named as the 2005 Pac-10 Freshman of the Year and also earned first-team All-Pac-10 honors.

Susie cemented her place in Golden Bear tennis history in 2005-06 when she was the 2006 Singles National Champion, the first ever for Cal. She was just the sixth unseeded player to advance to the NCAA final, the sixth sophomore to win the national championship and the 15th NCAA singles champion to come from the Pac-10. In addition to her title she was named to the 2006 ITA Collegiate All-Star team as a 2006 All-American singles selection and received All-Pac-10 second team honors. Susie ended the season with a 32-13 record and also earned Pac-10 All-Academic honorable mention.

In 2006-07 Susie was an All-American in singles and doubles and was ranked in the Top 10 for the entire spring. She maintained a nine-match winning streak during the spring and won 10 out of her final 12 singles matches, making it into the NCAA Tourney and winning her first match.

In her time at Cal she compiled an impressive record and definitely left her mark on Women's Tennis.