Alex is well known around these parts mostly for the fact that she is a very attractive female, but no one should forget that she is also an incredible soccer player. She starred during her time at Cal and has only gotten better as she has moved up to play for the US of A.

Ken was a Mic Man in the early 90's and by all accounts really revolutionized that position. His enthusiasm for all things Cal was infectious and I think that it is safe to say there are not really many Golden Bear fans bigger than him.

Clearly this is a tough match-up for Ken, but it is a 1/16 so that is expected. Alex should garner her fair share of the votes but I would not be surprised to see Ken make things respectable. This contest is out of the Joe Kapp Region and the winner is going to move on to face Nnamdi Asomugha. You can check out all of the match-ups in the full bracket here. Full write ups are after the jump. Voting ends on Friday. GO BEARS! 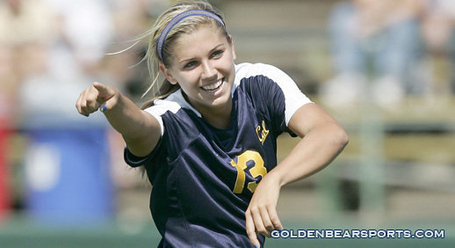 The accomplishments don't stop there. Alex's career is dotted with achievement:
● First team All-American as a senior
● First-team All-Pac-10 selection four times
● First Cal player ever to be named as a finalist for the Hermann Trophy, the Heisman of women's soccer
● Led Cal to the NCAA tournament in each of her four years
● Second-team Freshman All American in 2007