Recruiting Interview with Joe Davidson of the Sacramento Bee

Share All sharing options for: Recruiting Interview with Joe Davidson of the Sacramento Bee 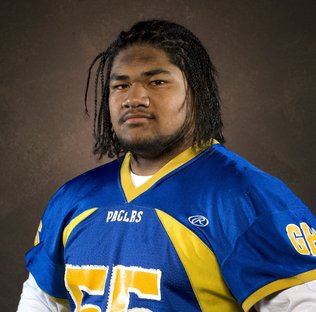 Can't wait to see some MoalaBear via 2.bp.blogspot.com

Losing Shaq hurts, but our brethren up North is once again stocked this year with future recruits that could make dramatic impact wearing Blue and Gold. Joe Davidson, our favorite from the Sacramento Bee, has once again offered to his wealth of knowledge with CGB. Don't forget to follow Joe on Twitter and Sacramento Bee's Hometown Report for the twist and turns this upcoming recruiting season!

If there's one local player you're rooting for to succeed at the next level because of his success on and off the field, who would it be and why?

In terms of who is coming to Cal, there are two players of note that stand out to me. Freddie Tagaloa of nearby Salesian High in Richmond will absolutely WOW the Cal coaches, players, faculty and fans for his class, character, skills and enormous body and upside. At 6-foot-8 and 300 pounds, he can run, he can block, he lives to achieve, and he never wavered on his choice to attend Cal when so many others did. We're talking about an NFL prospect here as an offensive tackle.

The other recruit of note is Steven Moore of Elk Grove, near Sacramento. He's 6-7, has played right tackle, left tackle, tight end and guard for a top-tier prep program, and he's absolutely thrilled to be coming to Cal. He had a fun story about how he and several other Cal recruits were invited to coach Jeff Tedford's house - and Tedford skunked all of them in billards. A shark.

Now...two players already with Cal I always admire and root for are Vei Moala and Puka Lopa, both of Grant High in Del Paso Heights in Sacramento. Moala and Lopa are defensive players of terrific character and work ethic. Their parents are proud beyond words with the achievement of their sons in class and on the field. Moala is a block of granite on the D-line and already has the school record on the bench press with something like 1,000 pounds - an exaggeration, yes, but he's strong enough to move mountains.

Yes, absolutely. I covered a lot of Cal football when Aaron Rodgers was there, home games, road games, bowl games, and every year I attend the Pac-10/12 Media Day in Los Angeles. Always fun. Earlier in my career, I covered a lot of Kings/NBA on the road. I much prefer local sports - high schools, colleges - and chronicaling their stories and achievements.

You work for MaxPreps in addition to the Sacramento Bee. For our readers who may not know, could you please describe what MaxPreps is and what you do for them?

MaxPreps is an amazing website that is the national leader for prep sports, created nearly 10 years ago by founder and still president Andy Beal who had a vision that prep sports was ready for the Web. He was right. MaxPreps has rosters, stats, standings, story links. I provide periodic stories on Sacramento-area athletes, be it a feature or a recruiting update. One of my very best friends is Mitch Stephens of MaxPreps and we content share a great deal.

It seems like your work for MaxPreps and the Sacramento Bee could often overlap. When you're creating a story for MaxPreps -- or for the SacBee -- do you use the same information for both jobs? How do you keep track of what you're doing for MaxPreps vs. the SacBee? Have you been able to use connections with either MaxPreps or the SacBee for the gain of the other?

I don't do much with MaxPreps except for a game story here and there with different story lines, different quotes. Never do I duplicate. We have a content-sharing agreement with MaxPreps as we run their story links/stats links on our SacBee.com site and they also link our SacBee stories. The bottom line is providing the best prep coverage possible.

I noticed you're on twitter. Do you regularly communicate with recruits on twitter or do you stick with more conventional methods such as email or phone?

I do a lot of interaction with media far more than recruits/athletes on Twitter. As for recruits, I'll either talk to them in person, by email, text or phone. Much more easier to make a connection than through Twitter.

Is the entire Tosh situation something which will have a several year effect on Cal efforts - or is it yesterday's news?

The Tosh Lupoi saga was a bad situation. He's recruiting for Cal while wearing Cal colors, selling the product in the Bay Area, then suddenly chasing those same kids days later for Washington. Not a good theme or message. Jeff Tedford has a terrific staff and has the new stadium and the Cal education to offer any recruit. Cal will do just fine, but the NCAA really should look more into this troubling trend of lead recruiting gurus suddenly bolting for another school days before Letter of Intent. It confuses the recruits tremendously.

What do you look for when evaluating talent?

Character, talent, sportsmanship, skill. If the guy has all the talent in the world but is a bad character, a bad sportsman, it sullies the entire thing. Some kids are just terrific role models AND great athletes, such as Vei Moala, now at Cal. I'll always remember his class and how he dominated people.

How has the recruiting game changed in the time you have spent following it?

It's changed a great deal since I started at The Bee in 1988. Technology has REALLY made an impact, like Facebook and Twitter where scores of "fans" flood recruits on social media to try and sway a recruit. And if a recruit goes elsewhere, those "fans" hammer on those recruits on Twitter with f-bombs and expressing a genuine hope he fails. That's awful.

What weight do you put on recruit's twitter chatter? Is it all to screw with the media or are they saying legitimate things on there?

Some recruits toy with everyone on social media as they are tasting celebrity for the first time. There should be tutorials on how to use social media, how to represent yourself and your school.

Who would you say is the player most likely to be an All-American at the next level?

Vei Moala absolutely can be an All-American at Cal and a high NFL draft pick. Knowing Vei and his character, he'll play all four years at Cal and graduate because he knows the value of education, making his parents proud and doing himself proud.

Who are under-the-radar players from the 2012 class from your region who will make a big impact?

An under-the-radar recruit is also from Placer County, at Del Oro High, in running back Brandon Monroe, also a stud on returns. Good kid with grades, speed, size.

When you look ahead to 2013, who stands out to you as being the biggest prospect from your region?

The best prospect in Sacramento is Placer High defensive lineman Eddie Vanderdoes, just north of Sacramento. He's a 6-4, 295-pound brute with skills, grades and character - and the interest with he and Cal is mutual.