While Zach Maynard is the undisputed starter for the Bears, Allan Bridgford is ready fill in if Zach is unexpectedly unable to play.

Waiting in the wings is Bridgford, the junior backup from Mission Viejo. Bridgford completed just 13 of 32 pass attempts in mop-up duty last season but said he's "definitely" ready for any opportunity.

Ask him his goal for spring ball, and he responds without hesitation: "Being the best quarterback on the team."

Bridgford is convinced the coaches share his confidence. "If something were to happen to Zach and I was the one who was in there," he said, "I don't think they have any problem with that."

"He's healthy, throwing the ball very accurately. He's very, very smart and understands what we're doing," Tedford said. "So I feel really confident and would be really comfortable with him on the field for us." 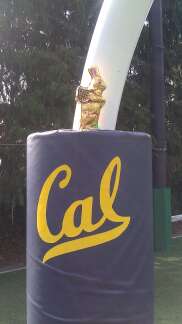