Thanks to everybody who helped with the nominations and recommendations in the open thread for the 2012 CGB Hall Of Fame Tournament last week. I am proud to announce the bracket today! Firstly, many thanks to reader unclesam22 who was very helpful in organizing this whole process.

We sorted all the entrants by seed and then took the top 64. I went and assigned them to the Regionals just in straight order 1 2 3 4 1 2 3 4 1 2 3 4. Then, we tried to even out the brackets so that they all had roughly the same amount of footballers and MBBers. Then, keeping all entrants at their original seeding, we moved a few around with an eye towards interesting matchups both initially and potentially down the line. We think we've created a fun and cool bracket that will be interesting all spring and summer long.

We will have 4 matchups each weekend for the next 15 or so weekends (save for the NFL Draft) carrying us through to pre-season 2012. Please join us by discussing the matchups and voting. Voting on each individual matchup will be open for one week and end each Friday at noon.

Here is the full bracket for your review! A closer look at each individual Regional after the jump. Please, take a look at the bracket and tell us what you think about potential winners and even who might make the HOF this year. Thanks and GO BEARS!

Here is the Brick Mueller Regional: 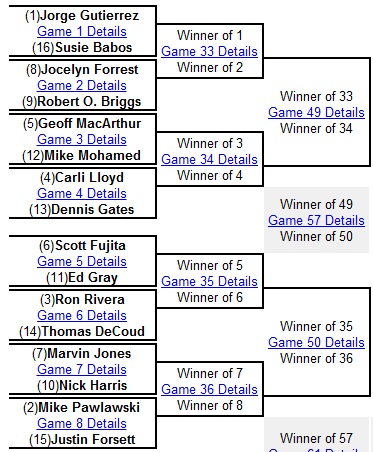 Tough to argue with Jorge coming out of this one. He was the #1 #1! I do like Geoff MacArthur making some noise here. Last year, he was a #1 seed. Not sure how he slipped to #5, but he might be criminally underrated there. I wish former band director Robert O. Briggs could make it deeper into the tournament. Sadly, I think he is not going to make it past Jorge here. A bad draw! :(

In the lower bracket, I think Forsett is very underrated at #15. However, Pawlawski is a tough #2 seed to draw. Scott Fujita is a sentamental favorite of mine, but frankly, I don't see any of the people in here making it past Jorge. Maybe they'll make it in as a Wild Card.

Here is the Pappy Waldorf Regional: 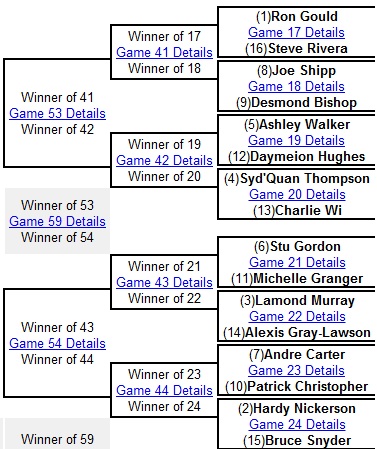 OK. Ron Gould is a #1 seed again, just like last year. Last year, Gould couldn't capitalize on his great seeding to make it to the HoF. Can he do better this year?

Keep an eye on Ashley Walker and Alexis Gray-Lawson. The WBBers always out perform their seed, because of the passion of their fanbase. Murray and Hughes better watch out! Only 2 WBBers made it to the tournament and both are in this bracket, but they would only meet if it was for a chance to go to the Hall Of Fame itself.

If Andre Carter and Hardy Nickerson meet, it'll be an interesting matchup of hard hitting defensive players that defined their era. I think either one of those will make it out of the lower bracket here. But I've certainly been wrong before!

Let's take a look at the Pete Newell Regional. 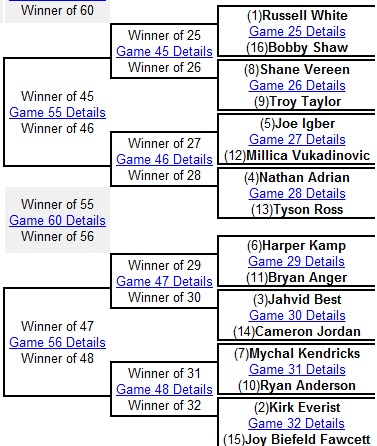 Russell White is another entrant, like Coach Gould, who seems to get a great seed each year, but can never quite get over the hump. Might this year be his year?

Tyson Ross is the only baseball player to make it this year. I have a strong feeling he will not make it to the second round, facing the Olympian Nathan Adrian. Two new entrants face off in the lower bracket in Harper Kamp and Bryan Anger. Who will win there? ANGER SMASH!

Here is the Joe Kapp Regional: 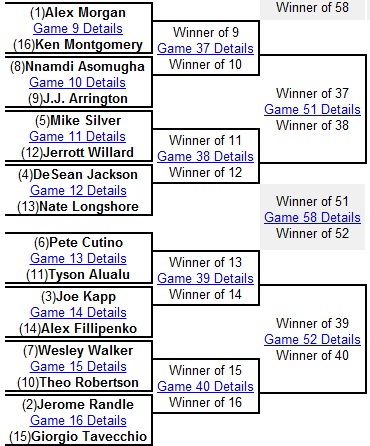 Of course, the Joe Kapp Regional had to have Joe Kapp himself! Nobody here saw him play, but some did see him coach and, of course, we all saw him punch that guy out. He takes on Cal professor Alex Fillipenko.

I see Alex Morgan coming out of this regional pretty strongly. But, like I said, I've certanly been wrong before.

What are your thoughts on all the proceedings? Who is gonna surprise this year? Tell us in the comments. GO BEARS!