Cal's third 2013 verbal commitment came Sunday afternoon, all the way from Norcross, Georgia. Defensive back Shon Akins pulled the trigger and committed over the phone to DB Coach Ashley Ambrose. 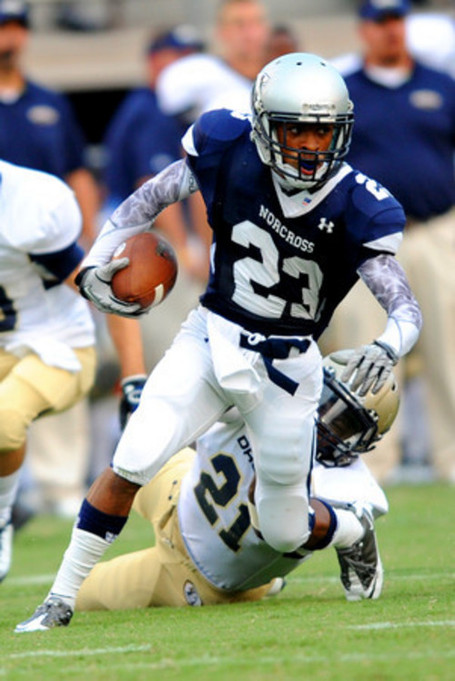 A relatively under the radar prospect, Cal was the first school to extend an offer to Akins. Defensive back is an area of serious need for us, so this is a good additoon to the class.

After the jump we'll have Shon's measurables, rankings, highlights, a little analysis and some tidbits from other stories on Shon's commitment to Cal.

Scout.com and ESPN have yet to evaluate and rank Shon.

Here are Shon's 2011 highlights. These are not the same ones that were featured in the Sunday post on Shon's commitment (those were from 2010):

Right off the bat, there's a clip of Shon returning a punt. He flashes good vision and moves. Having some ball skills is always a plus for a DB. I also appreciate that there's a good portion of these highlights are showing how he performs in run support. And guess what? He does well. Considering the criticisms of Shon being undersized, he isn't afraid to stick his nose in and make some tackles. With some defensive backs tending to act like matadors when it comes to tackling, I enjoyed seeing a kid who seems to seek out contact. He plays bigger than he is. When it comes to defending the pass, you can actually see him watching the quarterback's eyes at times and jumping some slants...getting there in time to break up several passes. I liked that too. He covers well and he doesn't seem to lack speed in these clips. He's aggressive and fights for the ball, nice to see too. Decent hips and fluidity as well.

This is a relatively small sample size, obviously. I'd like to see more film of Shon. Specifically, I want to see what he does this coming season. I expect him to look pretty good. What I did see above was a smaller DB with decent returning abiltiies, solid tackling, and good coverage skills. If he's 16 or 17, that size issue may go away as he matures. If not, he still plays a lot bigger than 5'9.

Both Rivals and the Atlanta Journal Constitution have stories on Shon's Cal commitment. Here are some of the tidbits.

From the AJC story:

Why Cal? "I just could really see myself playing there, I wanted to go out to the West Coast and see what football is all about out there."

Akins said he will take visits to other schools but added "I don’t think my decision is going to change."

From the Rivals story:

"I called [Bears defensive backs coach] Ashley Ambrose and told him I wanted to verbally commit," Akins said. "He was like, 'Okay, it's a good idea.' He said he'd get the head coach on the phone Monday. He wanted me to call him back then. It's official, but he just wants to run it by the head coach."


"You could hear in Coach Ambrose's voice he was excited," Akins said. "Me and him have a good relationship. If it was a problem he would have told me straight up."

As a first-year starter in 2011, Akins recorded three interceptions. Last week, he was among the top performers at the Rivals.com/VTOSports Elite 100 Georgia Camp in Marietta.

Akins has not yet visited Cal, but plans to soon.

"I was supposed to go during Spring Break, but things got rearranged, so now I'm going this summer," Akins said. "I have family from California. Everybody was telling me how beautiful it is there, and that the education is nice. Coach Ambrose and a player I know there have told me good things about the program as well."

Here's what Rivals had to say about Shon's performance at that VTO camp two weeks ago where he garnered much praise:

Akins, who claims an offer from California, earned the respect of his wide receiver competitors by showing very good coverage skills on Sunday. While he lacks ideal size at the defensive back spot, Akins' athleticism and instincts allow him to put himself in position to make a play on the ball in the air. He does a good job of staying on the hip of wide receivers down the field and is aggressive in going after the ball in the air.

Now obviously, giving a verbal prior to even visiting a school will cause a few eyebrows to be raised...mine included. And it's totally fair to consider this a soft verbal commitment. In fact, I think that's only fair for both sides. What if Shon visits Berkeley and hates it? That could happen. And he's planning to take visits. Its possible that a couple of the SEC schools come calling and Shon decides that staying closer to home is a better fit for him. I wouldn't hold that against him either.

But on the flipside...clearly Shon likes Coach Ambrose a lot and respects him. And he appreciates Cal for being the first school to offer. He is planning a visit, which could only cement his decision. Time will tell.

If it sticks, I'm quite comfortable with this commitment. Clearly, Coach Ambrose saw some things he really liked. Rather than simply slow-playing Shon, he went ahead and offered him. That says a lot to me. And based on what I saw in his highlights, Shon looks like a tough, athletic cornerback prospect who can play the run and is aggressive in coverage. Throw the stars and rankings out the window for a second and appreciate that. He's a bit undersized, but he's strong and still growing. We need defensive backs this year. I think we'll take four or so in the 2013 class. Having a cornerback with Shon's attributes works for me. If it sticks, I think this pickup will look a lot sexier in about 7 months. Give it time.