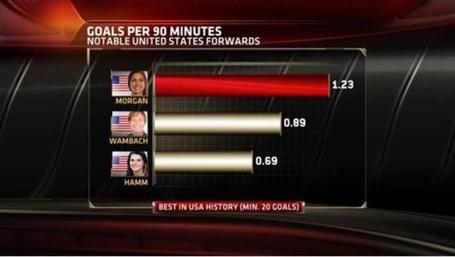 Since that night when the Japanese crushed our WWC hopes, Morgan has been in transition from her role as 'super sub' in the World Cup to a full 90 minute starter. At first, USWNT Coach Sundhage flirted with the idea of playing a 4-2-3-1 formation, similar to France's formation in the World Cup. However, as Morgan increasingly began to demonstrate her lethal finishing and her ability to play 90 minutes, it correspondingly became clear that Morgan not only had to play but also had to start.

To put it simply, Alex Morgan is boss. Her stats are crazy. In 2012, she's scored 12 goals already and at least prior to today's Brazil game in the Kirin Cup, she scored 10 of the US's last 18 goals. She is 20th on the all-time USWNT list just behind Shannon Boxx at 22 total. (Boxx regained her lead by scoring in the US win against Brazil today).

So far, a friendly against China has been announced for May 27 at PPL Park (Pennsylvania), but there'll surely be other friendlies arranged in the lead up to the Olympics. In addition, Morgan will be playing with the Seattle Sounders women's team (W-League 2012) in between her national team duties so if you're in the area, go take a look!

[For reference, Seattle Sounders Women schedule and looks like the USWNT members will be "at all three of the pre-season games and then 3-4 of the regular season home games. So that means they'll catch 2 of the away games for a total of 8-9 of the total 17 games, or 5-6 of the 14 regular season games." (Link)]