Our offseason walk down memory lane to celebrate the 2011 Cal football seniors continues. Last week, we looked back at the career of linebacker Mychal Kendricks. Today, we remember wide receiver Marvin Jones.

Jones' talent was evident from the moment he stepped onto the field as a true freshman. Jones made the wide receiver rotation as a true freshman in 2008, but his debut season was unfortunately cut short by injury. But over the next three years (2009 to 2011), Jones started all 38 games that Cal played. For his career, Jones finished with 156 receptions for 2,260 yards and 13 receiving touchdowns. Each of those figures cracks Cal's top ten all time for those stat categories. Jones also racked up six 100-yard receiving games in his career, good for sixth on the Cal all-time list.

Cal football fans grew to appreciate the tremendous football talent that Jones possesses. But as we learned through the course of his career, Jones is more than a football player.

TwistNHook: Everything you need to know about the experience and maturity of Marvin Jones, you can learn from this article:

Three years ago, Marv was an 18-year-old preparing for his first season of collegiate football. Four stars from both Rivals and Scout, the pride of Etiwanda High. The Inland Empire kid with the All-State resume ached to make the same impact as a true freshman at Cal. The Bears had lost every starting receiver to graduation or the NFL; what was left to stop him?

First day of fall camp was almost over when his phone rang. It was Jazmyn, his girlfriend of two years, still at home in Fontana. I’m pregnant. Throat knotted, stomach dropped. His position coach noticed, asked what was wrong. Five minutes later, head coach Jeff Tedford beckoned Marv into his office. Call your dad, he said.

Marv broke down, afraid he had failed his father’s expectations. But even as his tears welled and his voice cracked, Jones must have known deep down that everything would turn out fine. Marvin Sr. was strict, but disciplined his children to teach humility and responsibility. The man once toted four-year-old Marv on his back on walks to the park. He wasn’t about to shake his son off now.

"He said he’ll never be disappointed in me. He backs me up 100 percent,’" Jones says. "It switched from a type of sad tone to a happy tone."

He was a bit skinny when he came in, but left as one very solid guy. After having some inconsistency earlier in his career, he became absolute money with all manner of circus catches. It's a little sad to think about what a guy with his hands might have done had he not needed to make so many shoe-string, tight-roping, fingertip catches.
Avinash: I didn't follow recruiting much back in 2007, but I do remember being pretty excited about Marvin. DeSean was his main recruiter and raved about him, and you know what they say about game recognizing game. DeSean was definitely right about Jones, as he was our most consistent receiver for two years and gracefully slid into the #2 spot his senior season when the Bears rode [Keenan] Allen. 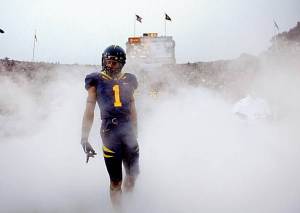 atomsareenough: He's been a total class act, a hard worker, and a great representative for our alma mater for the past four years. He was the best receiver on the roster until Keenan Allen came in, and rather than feel slighted about no longer being the #1 guy, he did his best to make sure the young talent was integrated into the system and was able to blossom as quickly as possible. Jones has been a rock in uncertain times. He always made the tough catches with the game on the line, always willing to go all out and risk his body to make the play. He's consistently delivered some of the most ridiculous catches along the sideline that I've ever seen at any level, and I just know he's going to be a success in the NFL. I don't know how the Bears replace him, and he will be sorely missed next year, but best of luck to him.
Hydro Tech: To me, when I think of Marvin Jones, I think of him as a great WR who sort of under-performed ... but by no fault of his own. Unfortunately, I think Cal's QBs while Marvin was here weren't exactly all that consistent and accurate which really hurt his ability to showcase his talents. I think Marvin is better than he often looked and better than most of us realized. He had fantastic hands and would routinely catch some very difficult passes. He was fantastic along the sidelines and getting his feet in bounds. He does a pretty good job shielding the ball from the defender when he catches it. While not always getting the most separation from his defender, he'd still routinely catch the ball against tight coverage. I wouldn't be surprised to see Marvin drafted in the 4th to 6th rounds of the 2012 NFL Draft.
Perhaps what impressed me most of all was Marvin's Cal spirit and responsibility. Marvin regularly conversed with Cal fans on Twitter, and represented Cal proudly. He also would apologize for any drops and promise to do better. He works hard and doesn't try to cover up his errors with excuses. Marvin takes responsibility for his actions and knows that he has the power to shape his future.
Ohio Bear: I think of Marvin as a guy whose talent we did not take full advantage of in his Cal career. Marvin is, to me, as talented as any WR we've had at Cal during the Tedford era. He has all the tools: speed, hands, route running ability. But he just happened to play during a time when we did not have consistently good QB play. Think of some of the good WRs we have had over the years --- Geoff MacArthur had Aaron Rodgers, Desean Jackson had the good Nate Longshore, as did Lavelle Hawkins. And Robert Jordan got to play with Rodgers and good Longshore. Marvin didn't have that luxury.

When we did have good QB play, we saw what Marvin could do. The catches he made against Ucla in 2009, ASU in 2010, Washington in 2011, and in the Big Game last year were particularly memorable. He was a legitimate vertical threat and could be a weapon on the end around (e.g., vs. Ucla in 2010).

I hope to see Marvin playing on Sundays for years to come.
CALumbus Bear: It seemed that Marvin was great in completing the catches that just had no business being caught. He seemed to be just like Geoff MacArthur in basically catching anything thrown his way. He was a number one receiver in a number two role. And he'll certainly be missed. Particularly his toes, which always knew where the sideline was. 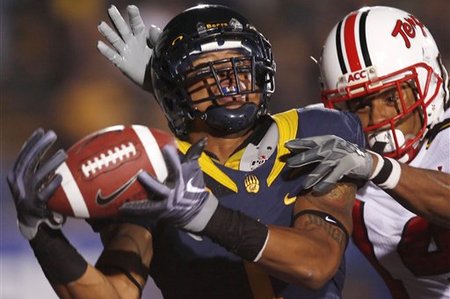 Catches in traffic? Marvin can do those.

Kodiak: Here's a question for OhioBear and LeonPowe: [Ed. note: Because Kodiak is calling them out for being old.] Of the Cal WRs from our (olds) era, who does Marvin Jones remind you of?
I'm leaning a bit towards Dameane Douglas for some reason. Or more of a combo? He has a bit of Bobby Shaw's route-running, some of [Iheanyi] Uwaezuoke's speed, and [Mike] Caldwell's ability to fully extend for catches.
LeonPowe: I think one thing to think about when comparing to OLD days is it seems like receivers from Tedford's era are much better athletes and more complete packages than from the 90s. I mean if you think about guys like Dawk [Sean Dawkins] or Caldwell, Jones was only slightly smaller, but would'be burned them off the line and had similar hands. I think because the QB situations were so dissimilar (would love to see what Tedford could do with Dave Barr and Pat Barnes) it's difficult to do a direct comparison. But maybe the acrobatic ability of Dawk with Mac's hands.
Ohio Bear: I'm thinking Uwaezuoke because of the speed and hands combo. Uwaezuoke's hands were underrated during his time IMO --- a fact I'd say was proven right when he stuck with the 49ers for a couple of years. I think he was a little faster than Marv, but not by much.

He doesn't really remind me of Shaw or Douglas. I think of those guys as better route runners. Just my opinion.
Another good comparison --- Marv is a bigger version of Brian Treggs.
We look forward to seeing you in the NFL, Marvin! Share your Marvin Jones thoughts and memories here in the comments.