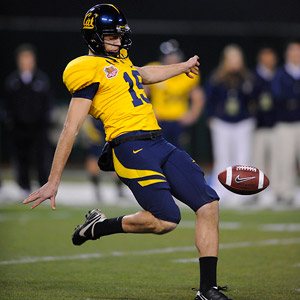 Stunningly, we won't be waiting for Bryan Anger to be drafted today. He Anger smashed his way off the draft board already!

Wow. What a night Friday was in the NFL Draft for Cal players. And Marvin Jones wasn't even one of them!

Cal fans did not have to wait long into the second round to see the first Golden Bear plucked off the draft board. But it was a mild surprise whom it was: OT Mitchell Schwartz was the first Cal player taken, 37th overall by the Cleveland Browns. Schwartz will join fellow Cal offensive line alum Alex Mack in Cleveland. (At this point, I may have to like the Browns!)

LB Mychal Kendricks was the next Bear to go, 46th overall to the Philadelphia Eagles, where he will join former Cal stars Nnamdi Asomugha and Desean Jackson.

The big surprise of the night for Cal fans -- well, perhaps not just for Cal fans -- was Cal punter Bryan Anger being taken with the seventh selection of the third round (70th overall) by the Jacksonville Jaguars. Anger was the first punter taken in the first 100 selections since the Chicago Bears drafted West Virginia punter Todd Sauerbrun in the second round of the 1995 NFL Draft. Hopefully, Anger can have the same longevity in the league as Sauerbrun, who lasted 13 years in the NFL.

This is your open thread for rounds 4 through 7. Television coverage begins at 9:00 am PDT on ESPN and NFL Network. Where will Marvin Jones go? The Cal wide receiver is still on the board. D-linemen Trevor Guyton and Ernest Owusu also have good chances to be drafted today. Also, will we see one or both of Cal's safeties (D.J. Campbell and Sean Cattouse) drafted? And what about TE Anthony Miller? Perhaps a longshot, but will an NFL team take a flyer on him?