Thursday's prime time opening act of the NFL Draft did not feature a California Golden Bear drafted in the first round. The Pac-12, however, was well represented with Stanford QB Andrew Luck (Colts), USC T Matt Kalil (Vikings), Stanford G David Decastro (Steelers), and USC DE Nick Perry (Packers) all being taken in the first round.

The draft resumes today with the second and third rounds. The fourth, fifth, and seventh rounds will take place tomorrow. There is a better than even chance that we will see some Cal guys come off the draft board today. Many mocks, including this one from former NFL GM Charley Casserly, have Cal ILB Mychal Kendricks and T Mitchell Schwartz getting chosen in the second round. The latest second-round mock from NFL.com, taking into account last night's first round, predicts Kendricks going to the Kansas City Chiefs today in the second round, but does not list Schwartz as a second round pick. NFL Network analyst Mike Mayock lists Kendricks as the third-best ILB in the draft and raves about his upside as a versatile guy:

``The neat thing about this kid is he not only ran an impressive time at the combine, but he also was extremely productive at Cal. So the productivity lines up (with the speed). The speed is phenomenal. People are worried about his size. But I think he could start inside in both a 4-3 and 3-4. Some teams also are looking at him as a WILL.''

As for Schwartz, many mocks predicted him as a second-round pick before the draft. But the NFL.com scouting report, though grading Schwartz as a potential second round pick, isn't so sure that's where he will go:

Schwartz is a versatile player who does many things well but doesn't stand out in any one area, and that's likely the rep that will stay with him through the draft. Schwartz is a guy who makes it off effort and smarts. He has decent size for a tackle, and doesn't display strong skills that would encourage a move inside to guard. His size and productivity at Cal will earn him consideration in the fifth or sixth round.

After the jump, see what other Cal guys we might see drafted in the next two days.

Berkelium97 put together a nice chart summarizing where the various Cal draft prospects will go. Besides Kendricks and Schwartz, Marvin Jones and Trevor Guyton are the only other Cal players who seem to be consensus candidates to be drafted. Jones has seen his draft stock rise with a good Senior Bowl week and good measurables at the NFL scouting combine. It is probably a stretch to say he will be drafted tonight, but look for him to go sooner rather than later on Saturday.

As for Guyton, he has risen up the draft board since Cal's college football season ended. He is seen as someone who could go in the fourth-to-sixth round. The NFL.com scouting report breaks down his strengths and weaknesses thusly:

STRENGTHS Guyton is very quick off the ball and when maneuvering in tight spaces. He uses his hands well and has good technique. He is fast to the quarterback once in the backfield and can make disruptive plays early and often. He really sets the tempo off the ball and has the ability to quickly blow back linemen. He is excellent in pursuit in the open field, where his speed really shows up. He is a sure tackler who was around the ball often in his senior year.

WEAKNESSES Guyton could have value as a late-round pick given his collegiate history. He displayed a lot of traits of an early draft pick in his senior year, but his value is limited because of the short amount of time he has displayed it. Although teams understand Guyton's being caught behind first-round picks Cameron Jordan and Tyson Alualu, they will wonder if he's truly the player with the skills he displayed in his senior year, or just a pretender who showed up to play only once his draft status was on the line. 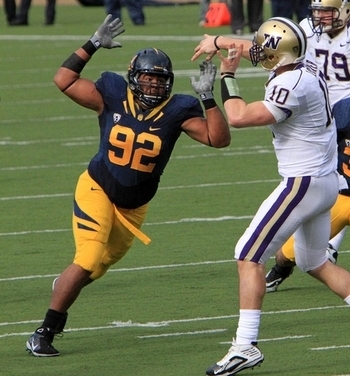 Trevor Guyton may get his chance to chase Jake Locker again at the next level.

An intriguing case is that of Bryan Anger. Will a team see fit to use a draft pick on a punter? If there is a team that chooses to do so, Anger is one of the top guys out there. For his part, Anger is pretty confident that he will be getting a phone call from his new employer before this draft is over.

"I think I'm the top guy that's going to go," Anger said of his place among punters in the draft. "I'm pretty much guaranteed to get drafted."

In reality, there's no such thing. Over the past six years, teams have drafted an average of only two punters per year. Just one was taken in 2011. Teams usually prefer to wait until after the draft, then sign a free agent at the position.

But Anger and Cal special teams coach Jeff Genyk are convinced this year will be different.

Anger is the consensus No. 1 punter among a half-dozen online mock drafts, and both CBS Sports and NFL Draft Scout project him to go in the third or fourth rounds.

Anger averaged 43.5 yards per punt over his career _ second-best in school history -- and dropped 90 kicks inside the opponent's 20-yard line. He averaged 60 yards on three punts at the East-West Shrine all-star game, and performed well at the NFL combine camp.

Genyk said the quality that has NFL teams interested is Anger's ability to adjust to the situation. He said that was a key to Cal improving to seventh nationally last fall in net team punting average.

And remember when we Cal fans were hand wringing (or downright mad) about the fact that Genyk had Anger employ the rugby punt so much? Well, at least one scouting report cites that ability as a strength in Anger's favor!

Here's wishing the best for our Cal guys these next couple of days! 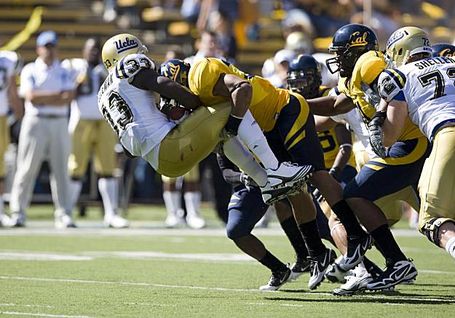 Here's hoping we get to see a lot of this play during the televised draft coverage of Mychal Kendricks.