Tonight is the night that 32 college football players have dreamed of for most of their football playing lives: the first round of the NFL Draft. This year, the first two are a foregone conclusion. The Indianapolis Colts have confirmed that they will select Stanford QB Andrew Luck with the first overall pick to become Peyton Manning's successor as the franchise quarterback. Baylor QB and Heisman Trophy winner Robert Griffin III is expected to go to the Washington Redskins with the second overall pick. After that is where the uncertainty begins. Until the last few days, the conventional wisdom seemed to be that the Minnesota Vikings would take USC T Matt Kalil with the third selection. But now, that's not clear. Will Minnesota trade the pick? Or will they take the supremely talented LSU CB Morris Claiborne? Or will they go with Kalil after all?

The Cleveland Browns are widely expected to draft Alabama RB Trent Richardson with the fourth overall pick, perhaps completing the Peyton Hillis downward spiral in Cleveland. With the fifth overall pick, the Tampa Bay Buccaneers and new coach Greg Schiano would love to take Claiborne. But will he be there?

After that, who knows what will go down? Will the St. Louis Rams pick Oklahoma State WR Justin Blackmon with the sixth pick or will they take Notre Dame WR Michael Floyd? Or will they do something completely different? Here's a fact for you Notre Dame haters: if Floyd is chosen in the top 10, he will be the first Notre Dame skill position player taken in the first round since 1993, when QB Rick Mirer and RB Jerome Bettis were drafted in the top 10 selections. (As I recall, one of those guys worked out all right!)

One thing we do know, unfortunately: a Cal player will probably not be taken in tonight's first round. Yeah, I know: not even Bryan Anger!

The action starts at 5:00 PT on ESPN and NFL Network. This is your open thread for it all. Enjoy the show.

And after the jump, see what might get Ohio Bear banned from CGB forever. 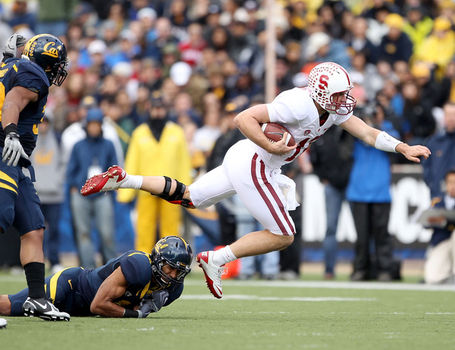 For all the wrong reasons, Sean Cattouse might be the only Cal player we see a lot of during the televised first round NFL Draft coverage.