Today, we have a cool matchup. VBall superstar Carli Lloyd takes on the Sheriff Dennis Gates. I loved Dennis Gates when I was at Cal. He later became a coach and we interviewed him (portions of the interview after the jump). Carli Lloyd was a great volleyball star, who helped take the vball team to the cusp of championship!

This is in the Brick Mueller Regional. Winner here takes on either Geoff MacArthur or Denis Gates. Full bracket is here. Full write ups after the jump. Voting ends this Friday. GO BEARS!

From BTown85: "The anchor of Cal's Pac-10 Champion women's v-ball team and National POY, leading the Golden Bears to the NCAA Finals only to lose (again) to Penn St. What a stud !!!!" 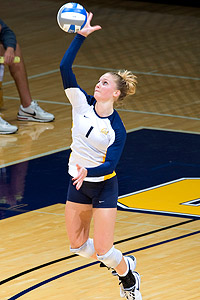 She is only the second player in Cal women's volleyball history to be a three-time All-American, and the only setter to win AA honors. This past year, she led the Bears to a program best 30-win season, their first-ever Pac-10 championship, and their first-ever national championship match. In recognition for her amazing play, she was also named the National AVCA Player of the Year. She is the first Cal woman to ever earn this prestigious award.

This interview with the Daily Cal reflects her winner's mentality:

"Carli Lloyd and Meagan Schmitt, the lone seniors on the Cal volleyball team, were taking a walk on Sunday night, only hours after the NCAA tournament bracket was released.

Suddenly Schmitt stopped. She turned to her friend and roommate and asked her if she would be satisfied with getting to the final four, like they did as freshmen in 2007.
"Would that be enough for you?" she inquired.

Lloyd looked at her and answered with the intensity that has become her trademark quality in four years at Cal.
"Absolutely not," she said. "I can't imagine anything other than winning.""

As a representative for the US, she helped Team USA win two gold medals and bronze medal. She is the only three-time selection to the USA A2 National team in the program's history. Now that she has graduated, Carli is working out with the U.S. Women's National Training Team in hopes of making the 2012 Olympic team.

Unclesam22: Dennis is currently an assistant coach with the Florida State men's basketball team, having returned last year to the school where he was a graduate assistant. Before returning to the Seminoles he was a coach at Nevada, Northern Illinois, Marquette, and Cal.

Via his official Cal bio:

During his tenure as a player, Cal compiled an 83-46 record, winning 20 games in a season three times. In 2002, the Bears reached the semifinals of the Pac-10 Tournament and the second round of the NCAA Tournament. In addition, Gates was named to the all-tournament team at the Golden Bear Classic in '01-02 after hitting a three-pointer in the closing seconds to beat Penn State, 76-73, in the championship game.

Since graduating from Cal in 2002, Gates spent one year on staff with the NBA's Los Angeles Clippers and at Marquette University and Florida State. He served as an intern assistant coach under Alvin Gentry and Dennis Johnson with the Clippers in 2002-03, then was a graduate assistant on Tom Crean's staff at Marquette in '03-04, helping the Golden Eagles to the quarterfinals of the NIT, and a GA under Leonard Hamilton at Florida State during the '04-05 season.

A native of Chicago, Gates was a two-time first-team Pac-10 All-Academic choice and the 2002 Cal recipient of the Pac-10 Medal. He received Cal's Most Inspirational Player Award in 2001, the Pete Newell Award as the team's best defensive player in 2002 and was twice named the Bears' Outstanding Student-Athlete (1999, 2001).
Gates earned his bachelor's degree in sociology in just three years and competed as a master's candidate in education during his senior campaign. He recently completed his Master of Science degree in adult education & human resource development from Florida State University.

Via Twist's 2009 Interview with Dennis

REASON #1 - NATIONAL ACADEMIC REPUTATION The academic opportunity which Berkeley presented was one that I was smart enough not to ignore and turn down. I was aware that when the ball had stopped bouncing, a Berkeley degree would be the key that continued and still continues to open doors for me professionally.

REASON #2 - PAC 10 CONFERENCE BASKETBALL The Pac-10 was one of the best conferences in the 1990's and it was important to me that I attend an institution that offered the combination of both great academics and athletics. The NCAA tournament in the 90's featured the following:

REASON #3 - SEAN LAMPLEY Me and Lampley have been best friends since I was in 7th grade. His freshman year success at Cal and smooth academic transition made it much more easy for me to follow in his footsteps and head to the bay area.