The sole remaining WBBer takes up today against footballer Daymeion Hughes. Ashley Walker might be the greatest women's basketball player to ever lace em up for Cal. She is the #5 seed here taking on corner back Hughes.

This is in the Pappy Waldorf Regional. The winner here takes on either Syd'Quan Thompson or Charlie Wi. Full write ups after the jump. Here is the full bracket. Voting ends this Friday, so go and vote! GO BEARS!

Pac-10 All Freshman team in 2005-06
Named first team All-Pac-10 three times; she is one of only four Cal players to be first team All Pac-10 twice.
Pac-10 scoring champion as a senior when she averaged 19.8 PPG
Named to the Pac-10 All Defensive team twice. 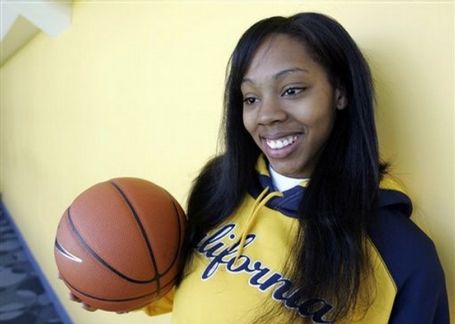 Plenty of people made the case for Dante.

thehawkse7en: Just an excellent, excellent cover corner who totally locked down one side of the field during his Cal career.

zachahuy: For all the exciting interception he made. " Lott Trophy winner in 2006 and a first team All-America while leading the nation in interceptions at the time with 8"

Spazzy McGee: Dante Hughes was one of the most dominant if not the most dominant cover corner Cal had ever seen. Many multi-year players in college show vast swings in their ability from year to year, or have careers rendered moot and inconsistent by injury or other distraction. With a steady progression from solid to spectacular over his four years at Cal, Daymeion showed none of this.

A highly lauded dual threat recruit, Daymeion was equally dangerous rushing and passing. His stellar D in addition to the 15 TDs and yardage totals he chalked up landed him as the #41 player in the nation coming out of Crenshaw High School in LA.

Starting as a true freshman in the oh-so-innocent Tedford days of 2003, he won team freshman of the year, and in a sign of things to come, intercepted his first pass for a 72 yard TD vs. Oregon State. His sophomore year brought continued development, starting in 11 games and honing his approach and tackle skills.

Daymeion truly started to shine in 2005, his junior year, in a vein not seen since Deltha O'Neal. With five interceptions, 16th nationally, for a massive 159 return yards, DelthaDaymeion effectively shut down half the field for opposing QBs, and along with Tim Mixon was a major force in the (mostly) rock solid 2005 D. His play also led to two of the more inventive facebook groups to be created for Cal football players (Group 1 & Group 2 here, click on them!).

His senior season was stunning. Eight interceptions for a hundred and then some yards and two more for TDs, seventeen pass breakups, and 72 tackles. QBs hardly dared throw near him. With his partner in defense Tim Mixon out of Cal with untimely injury problems, Daymeion found time to tutor an up-and-coming freshman named Syd'Quan Thompson. It appears to have worked. His hard work was well rewarded. In addition to the Lott trophy, Hughes was an AP first-team All American and the Pac-10 player of the year. He was drafted by the Indianapolis Colts and continues to play in the NFL under the new persona of Dante Hughes.