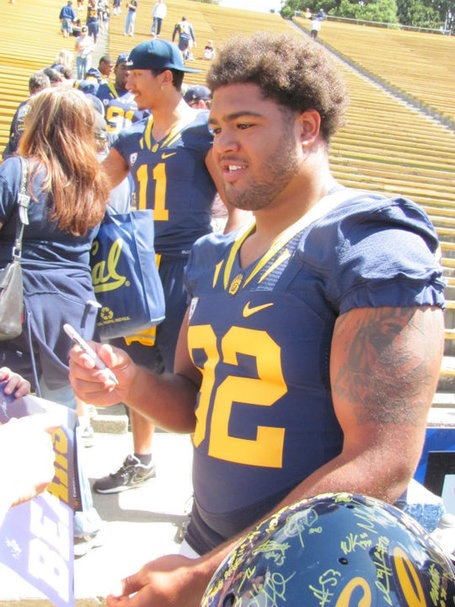 Our celebration of the 2011 California Golden Bear football seniors continues with defensive lineman Trevor Guyton. (In case you missed our past installments, follow these links for our previous installments for Mitchell Schwartz, Marvin Jones, and Mychal Kendricks.) The 6'3", 280-pound Woodinville, Washington native played in 41 games in his four-year Cal career (2008-2011), starting 16 of them. He had his best season by far as a senior in 2011, sharing the team lead with 4.5 sacks and picking up 10 tackles for loss. In 2011, Guyton also forced two fumbles, recovered two fumbles, and scored his only career touchdown on a fumble return against Fresno State. The good senior season earned Guyton an invitation to the 2012 NFL scouting combine, after which he was rated as a solid value for the sixth round of the NFL Draft. Another draft analyst projects him as a potential fourth round pick.

Today, the CGB staff remembers Guyton's career and looks forward to seeing him play on Sundays, Mondays, and Thursdays in the NFL.

Kodiak: Trevor Guyton may not have been flashy, but he was one of those solid, blue-collar trench warriors that every team loves to have.

He got better each year and really started to show some burst as a senior. I suspect that he was slowed with some nagging injuries because of the substitution patterns on the line towards the end of the season. When he was in there, he was by far our best defensive end and really did a nice job holding the edge at the point of attack.

If not for the youth at OLB, I think Guyton would have had a bigger impact. Or perhaps not, because the DE in a 3-4 is often overshadowed even when they're doing their job correctly.

Ohio Bear: By the time he was a senior, Trevor had turned himself into a sold player on our defensive line. There was some improvement from his freshman to junior years, sure. But his senior year was really something special. I dare say that the Cal defense got much more out of Trevor than I expected in 2011.

Like Kodiak says, Trevor turned into a guy who could really hold the edge. That should be his legacy. But most of all, I'll remember him for rumbling in for a touchdown on the fumble return against Fresno State in last year's season opener. If I am remembering correctly, I believe Trevor said after the game that it was the first time he had scored a touchdown on ANY level of football. It was appropriate for him to score his first TD in the season opening game of his senior year as a Golden Bear: it was symbolic of his steady improvement as a player that culminated in a solid senior season. We'll miss you, number 92.

Avinash: The thing that's most remarkable about Guyton's emergence was that he wasn't even a starter until the near-end of his junior season. Yet after he took the job he didn't relinquish it. He had a strong game against Washington State, had an instrumental role in slowing down Oregon two seasons ago, and then had a yeoman 2011 campaign as a member of a great team defense.

Guyton was a scrapper. He wasn't a physical specimen like Cameron Jordan or a highly condensed bundle of energy like Tyson Alualu. He engaged the opposition and won and lost his fair share of battles. But he always worked hard to keep his position and open up a gap by shooting through it, or bull rushing a defender to push them back on their heels, or just straight up pushed his guy back on his heels in order to get to the ball-carrier or the quarterback. He definitely had his moments to shine.

LeonPowe: I'd like to add one thing which I thought was pretty awesome - during the WSU game he wore the jersey number 6 to honor one of his friends and high school rivals who had played for WSU but who had gotten in a car accident and is dealing with lower body paralysis. Here's the story.

"He was one of my best friends," Guyton said, referring to his former childhood friend who went from Sammamish's Eastlake High to Pullman to play football, only to see his dream shattered in a one-vehicle rollover accident outside Washtucna after the conclusion of his freshman year in May 2009.

Guyton, a defensive end like Mackay, played with WSU's Logwone Mitz at Redmond High - a rival of Eastlake - but was friends with Mackay long before.

And Saturday he wanted to honor his friend who is at home outside Seattle, dealing with lower-body paralysis suffered in the accident.

"He's been going through some tough times," Guyton said.

Guyton and the Bears dominated up front, with the senior posting four tackles - including one of Cal's seven behind the line of scrimmage. Guyton and the defense held Washington State to a season-low 224 yards in the 30-7 victory. 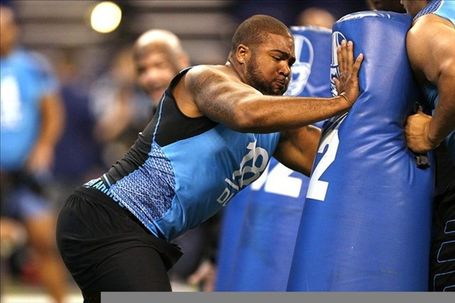 Ohio Bear: Since 1992 was my graduation year from Cal, I always have a soft spot for the guys who wear jersey number 92. With all due respect to Daniel Nwangwu, I think Trevor Guyton is my favorite number 92 of all time! Guyton was clearly a talented player from the get go at Cal -- after all, he played as a true freshman in the 2008 season. But his 2011 season was truly a breakout year that the Cal defense needed.

How will you remember Trevor Guyton's Cal career? How do you think he will do in the NFL? Share your thoughts in the comments.