Obviously, a lot of credit needs to go to SMC's play for stifling Cal's offense. However, Cal also shot itself in the foot. While the first half saw a lot of crisp play by the Golden Bears, it was as if Coach Jack Clark was filming a scene for the rebooted 3 Stooges franchise in the 2nd half. Quite a bit more turnovers, including basic errors on passes. SMC was playing Cal really tough and Cal didn't need to give them any additional opportunities.

Cal would slowly drive into SMC territory and then turn it over just as it looked like they might make headway towards the end zone. Given that Cal's two first half tries were on explosive breakaway plays, there was never a really good, solid drive leading to 5 points. Sads!

Here we have some more photos from the game, all in the 2nd half or post game. I was fiddling with a few settings to try some things and so some of the photos have WAY too much light. SORRY! 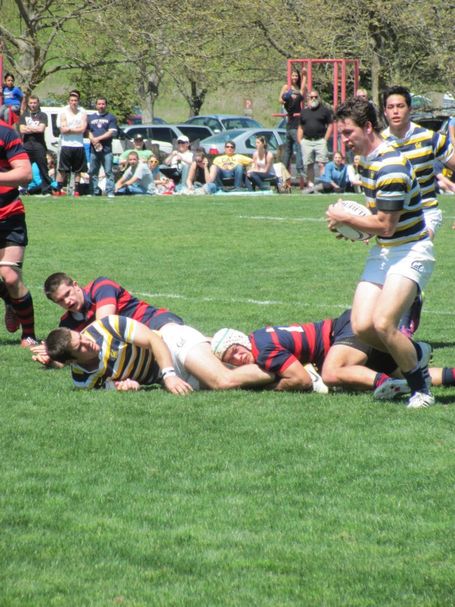 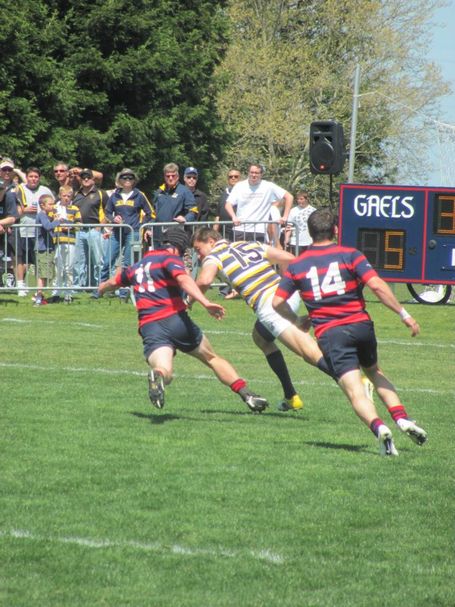 I wish I had more analysis of the 2nd half for you. Like I said in part 1, I'm not a rugby expert. Some of the nuances elude me. This is especially true when penalties are called. I do not know what the different penalties are. I go mostly off which side of the field is cheering. I could see that Coach Clark was getting upset with some of the penalties involved. At one point, I heard him exclaim "Now they call that!" although I lacked the context to understand what it was they called. I presume something against Cal that SMC had been getting away with. 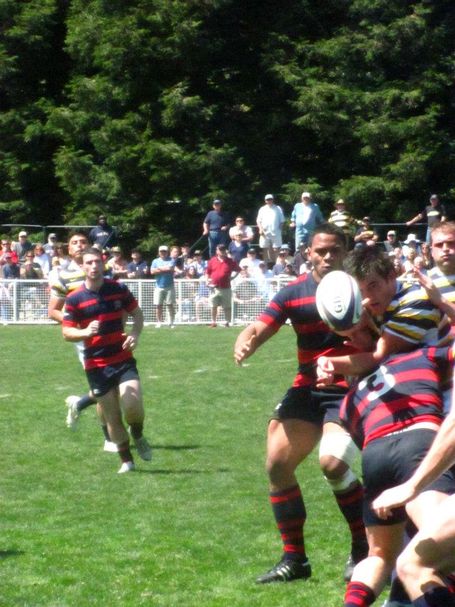 SMC opened up the half with a quick score. It was 15-12 in favor of the Bears at that point. 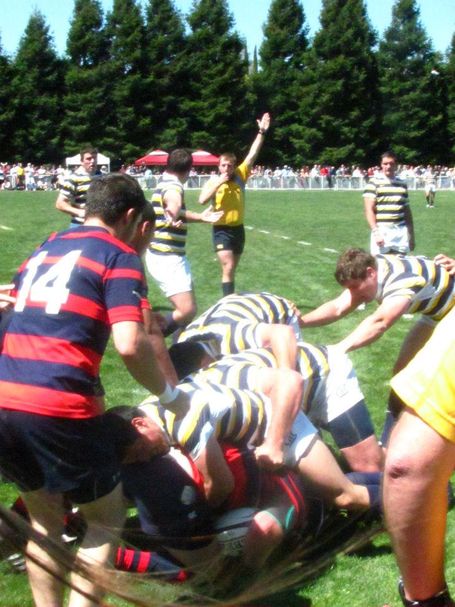 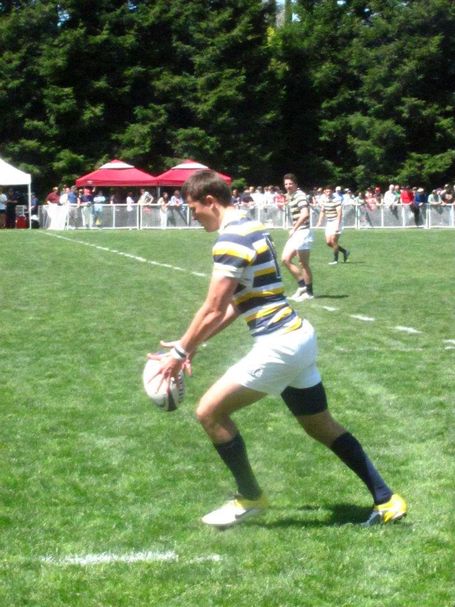 Being right at the sideline allows an amazing amount of access. I heard one of the players run over and exclaim that he needed a knee brace. This led to the team doctor running out to give him a brace. I heard the assistant coach tell the hydrotechs to "water em." 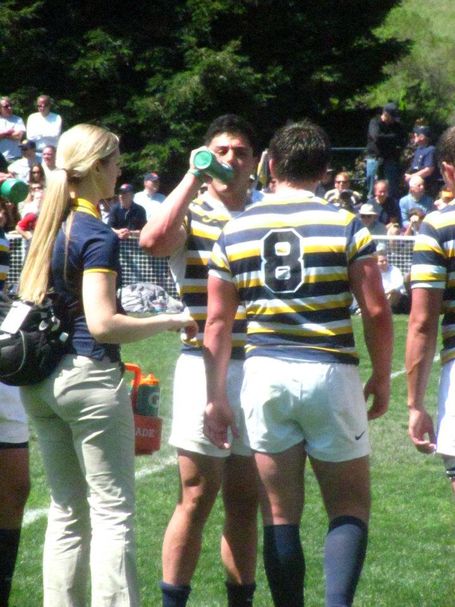 I love this guys shoes! Bright orange. Sadly, this was one of the exposed photos, so it doesn't quite come out great. This player for SMC, bee tee dubs, would just run through tackles. Even though I was rooting against him, he had some pretty sick power moves, just crushing people in his path. 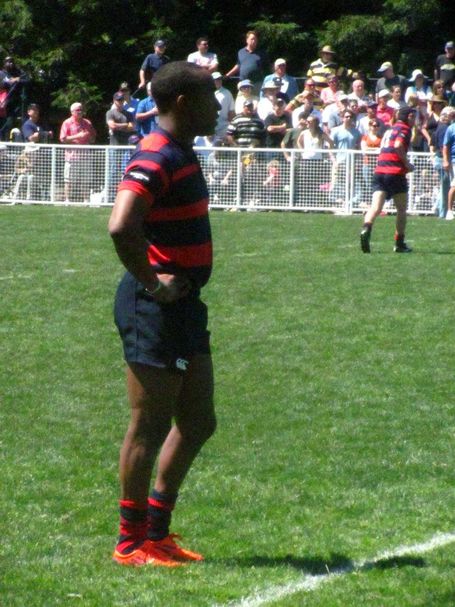 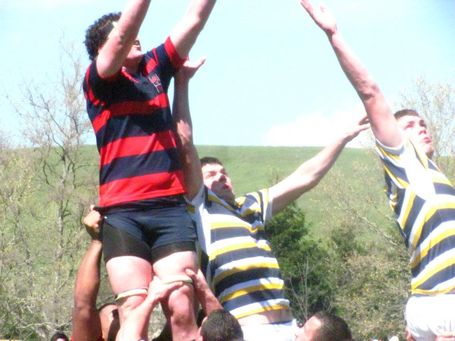 This photo represents a weird situation. 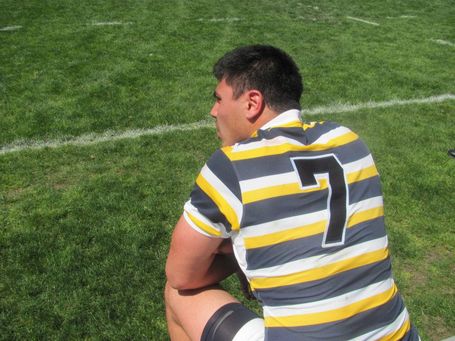 A fight broke out on the field! I didn't quite catch the start of it. When I looked up, players were pushing each other on the field as they get up from a pile. This scuffle was going on, while the players with the ball were continuing play down the field. One of the SMC players punched a Cal player. It was not a fist punch more of an open palm strike to the face (but not a slap).

After that happened, this player (Cal's #7) came off the field. He seemed upset and said "WTF, I was being choked." I did not quite catch his role in the fight, but I presume he was one of the initial instigators. He was frustrated and upset at being removed from the field, especially when it did not appear to me that a SMC player was being similarly removed. In fact, I heard a fan yell "Two players fight and only 1 yellow card, this is ridiculous!"

When #7 came off the field and made his soliloquy, it led to one of the most bad ass moments of my life. Coach Jack Clark, who naturally has some infinite more masculinity than I ever will, turned to #7 and barked "SIT DOWN AND SHUT UP!" I loved that no excuses mentality. He later turned to one of the refs and said "Hey, watch the punching out there!"

Last year, I got a lesson on rugby etiquette when I heckled a SMC player during a conversion kick. I was heckled by SMC fans around me in an embarrassing display. This year, I learned more about rugby etiquette. There is no excuse for dirty play. Even if the opposing player punches you in the face, you shouldn't even put yourself in that situation.

The ref came over and told #7 that he would keep an eye on the clock and #7 could come back in in 10 minutes. Cal was, thus, playing down a man, like a hockey power play. This was a terrible situation for Cal.

SMC immediately went down the field to score a go ahead try (although they missed the kick). SMC took its first lead of the game at 17-12. I checked the time stamps on my live tweets:

So, within a few minutes there, SMC, taking advantage of their numbers, managed to score a key try. They missed the kick, but given that the difference in the game ended up being 2 points, the 5 points for the SMC try there was HUGE! All because of the fight and the refs.

But the game was not over yet! Even though Cal was still down by 2, there was plenty of time left for our valiant Bears to make their move.

Cal did make its way down to the SMC side of the field. This is where some of the rugby penalty rules limited my understanding. ManBearCal would later explain to me the situation, but apparently when certain penalties are called, the non-penalized team can choose to make a kick attempt. This conversion is worth 3 points. So, Cal got down near the end zone, got a penalty, choose the kick, and made the kick. According to my tweet, this was a few minutes later (2:21 PM) and with about 9 minutes left in the game:

However, this would be Cal's last lead of the game. 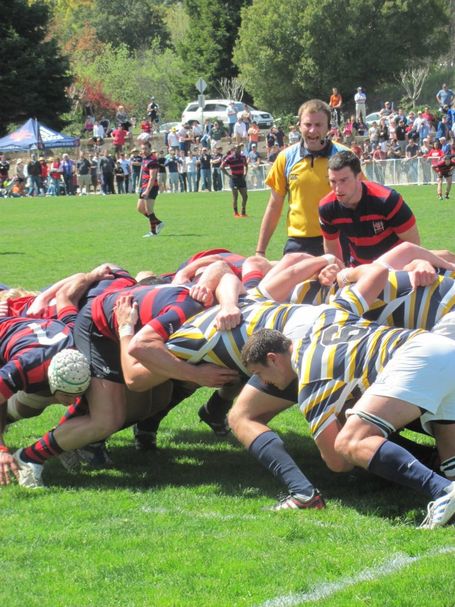 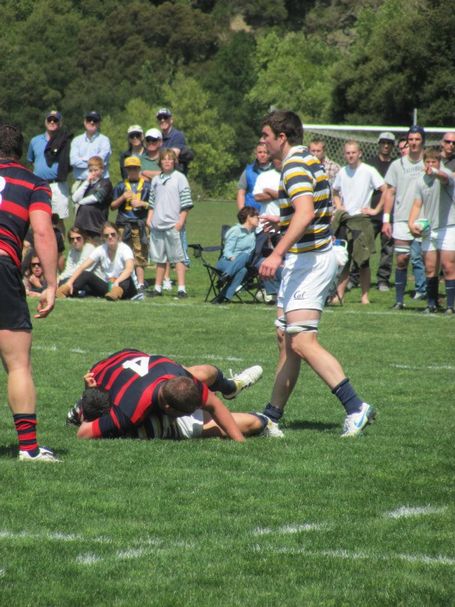 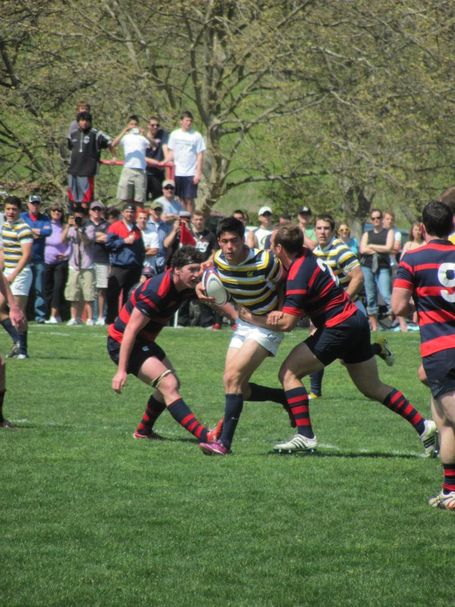 SMC and Cal went back and forth a lot for the next several minutes. SMC got the ball fairly deep into Cal territory, but Cal got a key turn over. I felt like this was our shot to push the ball back towards the SMC side and run out the clock. The ball went out of bounds and Cal had the line out opportunity. However, in MID AIR (!!) the SMC guy intercepted the ball from the waiting hands of the Cal player. This was a terrible moment as it gave SMC great field position.

And, like I said before, if you are down by 1 or 2 and you are right near the goal line, you can play for the penalty as much as the try. SMC got that penalty and opted for the 3 point kick attempt.

Cal was still alive at 18-17! SMC then tried a live action drop kick attempt. Kind of like in Aussie rules football or Doug Flutie style where the player just stops in the middle of running and tries to kick it through the uprights.

BUT THEY MISSED AGAIN!

Cal was still alive at 18-17! There were just about 2 minutes left. Could Cal keep SMC from scoring any more points?

Sadly, no. SMC got the ball and incurred a penalty. Opting for a kick, they finally made it.

I felt like this inside, but with actual emotion instead of fake crying action:

The Cal fans spun into action, trying to inspire their team with rallying cries. The team pushed the ball down the field, but there just wasn't enough time to score any points, either by kick or try. And then this: 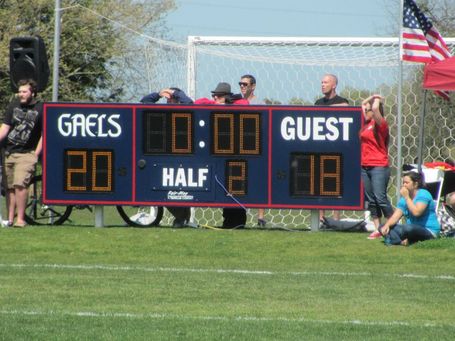 The thing about rugby is that even when 0:00 hits, the game isn't over. It goes until the play is whistled dead. Last year, Cal scored a try at the end of the first half with 0:00, because the play just kept going and going and Cal ended up scoring.

So, this year, the clock for the game hit 0:00 and the play continued for some more moments. Cal wasn't even close to anything ever at any time. Then, finally, the play was whistled dead and the game called over. The SMC team acted like they had just won the World Series. The team rushed onto the field, going crazy. 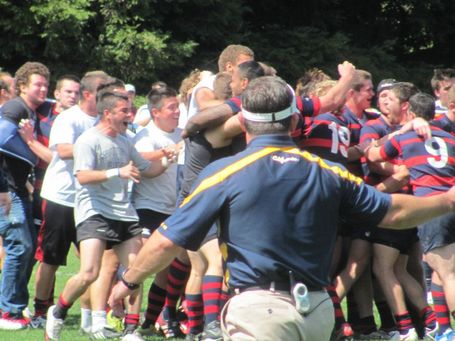 If any team is going to beat Cal, I am, at least, happy that it is East Bay favs, SMC. Bully for them. But still. 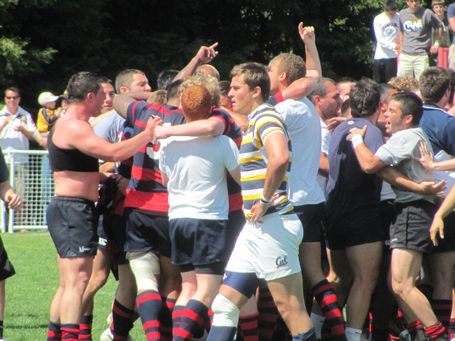 Class at the end: 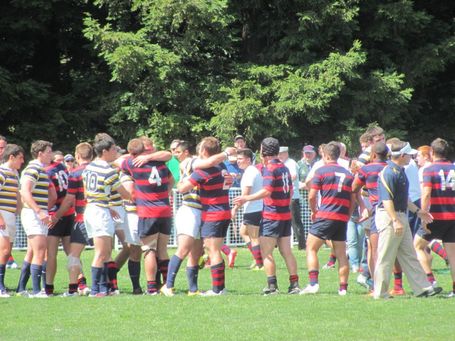 And so my weekend of destruction was over. First, I caused softball to lose for only the 2nd time all season. Then, I caused rugby to lose its final game of the season and first loss to SMC since 1990. A young Bell Biv DeVoe was teaching America to love again. Germany was reuniting. And pretty much every player on the field Sunday was not even a twinkle in their Gen X parents eyes.

May Cal not lose to SMC for another 22 years. GO BEARS!