Well, then, let's talk softball! I had never actually been to a softball game before I went to the Cal-Arizona game on Saturday (April 14, 2012). So, I was excited to have this opportunity. I was also excited to go see Cal and Arizona as they are two of the best two teams in the nation. Cal is currently #1 in the nation and Arizona #13.

The game was at 1 PM, but I got there a bit early, just because I did not know how the seating et al would be. On the way up, I saw that the football team was practicing at Witter Field, right next door to Levine-Fricke Field where the softball team plays. The door to the practice field was open, but I wasn't sure if I was allowed to sneak in. It did not really matter as the practice field was unimaginably viewable from the new outfield bleachers set at up Levine-Fricke field. There were many people sitting, waiting for the softball game to start, watching the football practice. I did not actually watch the practice and have nothing to report. Even if I did watch the practice, I am so bad at breaking down football etc etc etc, my posts would be so useless.

"Uh, the guy in green threw the ball forward....it was caught by another guy, who ran and then stopped."

"Well, there was this one guy who used his first to boot footballs very far into the air. They went through a giant metal tuning fork that was yellow."

"Although called football, it bears little resemblance to European football. As such, I was not prepared to analyze the practice, but, GO MANCITY!"

This is why I stay in the background and take photos, while HydroTech is the football talking guy. When I got to Levine-Fricke field, the teams were warming up. They would have one team practice on the infield and then announce "Arizona, infield, in one minute" or something along those lines. How very organized. 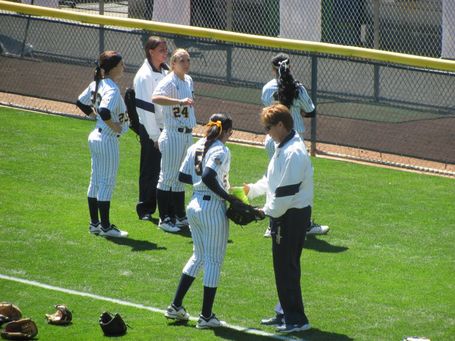 I had looked at the regular, behind home plate seating, but it appeared to be packed. So, we went over to the outfield seating to enjoy the game. This newer seating was behind the scoreboard, which would lead to some troubles later. But for now, it was about 1 o clock on a gorgeous spring Berkland saturday and we were ready to drink deep of some softball. More photos and information about the softball game after the jump. GO BEARS!

The softball field is a really gorgeous place to take in a game: 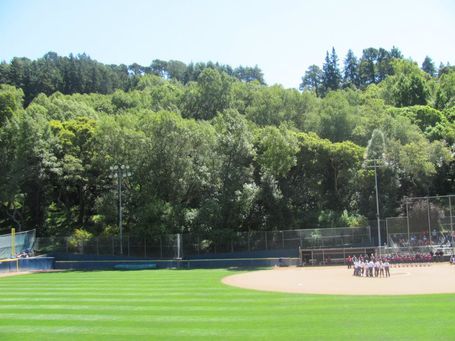 Strawberry Canyon is one of the most beautiful places in Berkeley. It is almost unfortunate that they put a football stadium and other assorted sporting areas up there, because who knows what other opportunities were available. But we don't live in hypothetical realities, we live in the one where you can watch a football game, rugby game, or softball game with the hills as beautiful backdrop. And, except for the fact that rugby hasn't had a home in a few years and the football team has had a long history of sucktitude with short breaks of mediocrity to excellence, I love this reality!

It was time to announce the teams. Unsurprisingly, they were Cal and Arizona. 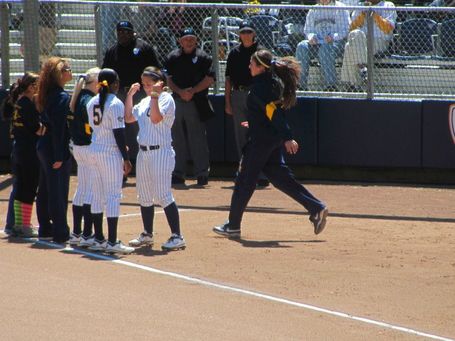 And also the 2002 Softball World Series winning team was there. It is the 10 year anniversary. Did you forget their anniversary??????????? 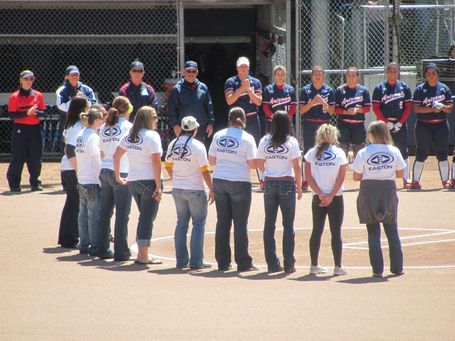 Jocelyn Forest, star 2002 championship winning pitcher, threw out the first pitch. She also sang a really andante version of the national anthem. I'm not saying it was bad, I've just never quite heard the song sung at such a "walking" pace. I considered going with largo for that adjective, but I think andante is a better way to describe the pace.

I wonder if she knows that she is currently going up against former marching band director Robert O. Briggs in the CGB Hall Of Fame (speaking of musical tempos, it appears that the marching band community has rallied in that one). I'm guessing no. 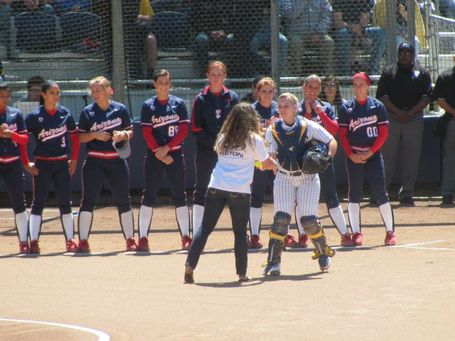 And then, we were off! Ready to go! Valerie Arioto was pitching for Cal (she would later play first when Jolene Henderson replaced her). She pitched alright to start the game, but got into some trouble in the 2nd inning. 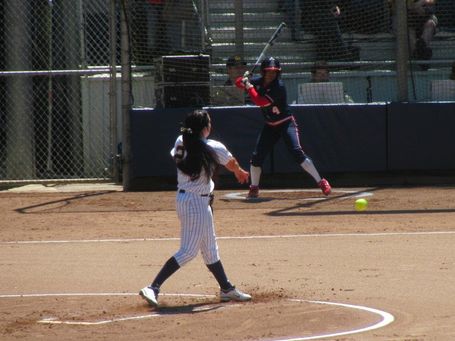 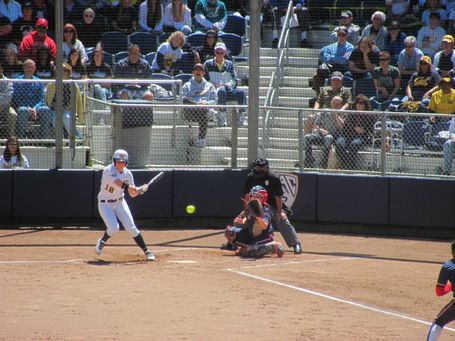 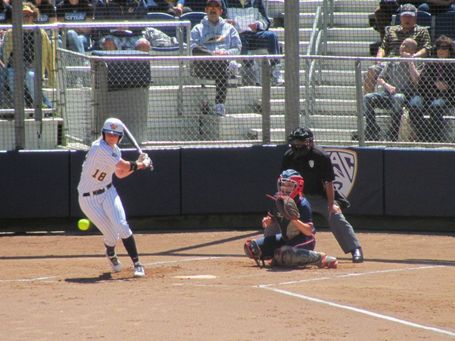 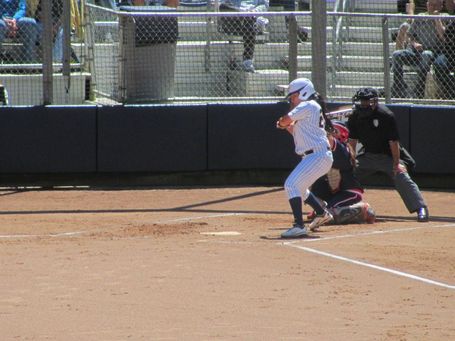 Rally Comm came up to our area to help get the party started. At one point, they tried to get a GO....BEARS....GO...BEARS chant going between the different seating areas. The rally commers were all "ON 3, GO, HEY CAL FANS, GO!" Then, they counted to 3 and some of the fans yelled "GO" while others started to yell "HEY CAL FANS, GO!" Since the first group just yelled GO and stopped, it confused the second group who just kinda yelled "HEY." It was a microcosm for the rest of the day.

After the football practice ended, some of the football players (including Zach Maynard still in green pads) came into the game to watch. Good to see Cal athletes supporting other student athletes. 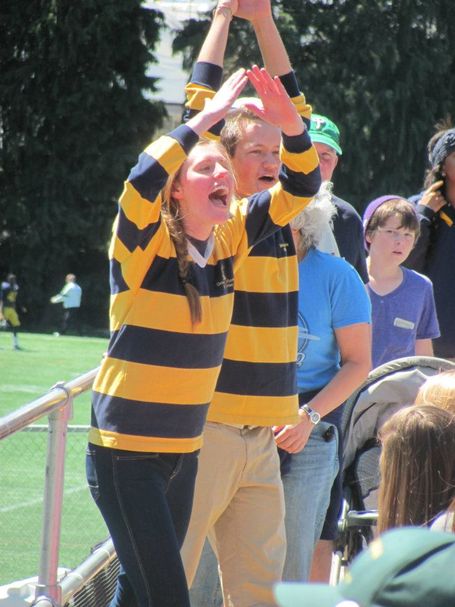 This is outfielder Jamia Reid: 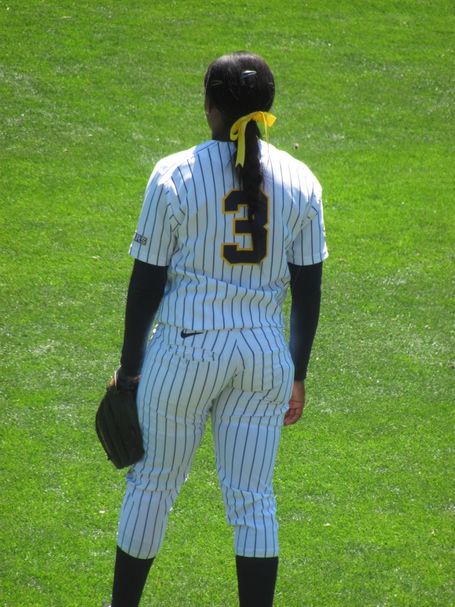 This is center fielder Frani Echavarria: 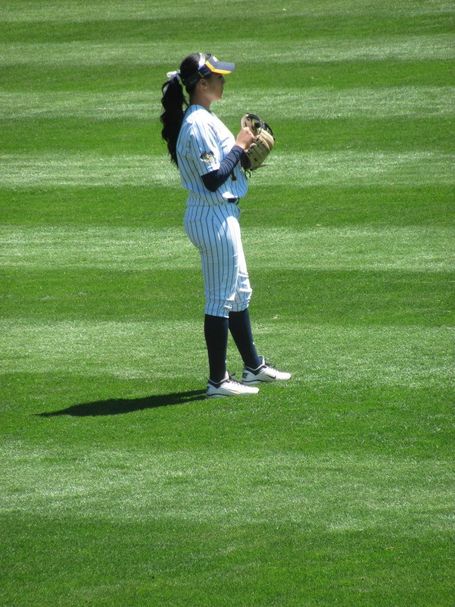 In the 2nd, Arioto gave up her first run. I got somewhat confused and, not being able to actually check the scoreboard, thought there were 2 runs given up. Arizona was manufacturing runs and there were a lot of players on the bases. Mea culpa (not to be confused with mea cupla, which is what I say when I think I'm being really witty about somebody drinking out of my glass). Arizona would end up with 13 hits on the day, so they had a merry go round out there at times. I have proof of my confusion:

Cal hits a 2 run homer! I might gave a wrong score before we can't actually see te scoreboard. It might be tied at 2

I kinda gave away a few items from the game there. Cal did actually gun down an Arizona player to end the third (although not before Arizona scored a 2nd run). The 2B made a slight fielding error, which caused the Arizona runner to get overconfident in her ability to make it to home from 3rd. I said it was 3-0 at that point, even though it was 2-0.

Then, in the 4th, Breana Kostreba hit a home run to make it 2-2. I said it was 3-2. RUH ROH! There were people tweeting at me that I was wrong, but I oddly wouldn't see those tweets until later (after I had corrected myself). It is a good thing that there is a difference between a journalist and a blogger. We have no sense of accuracy and, in most cases, strive to be as unbelievably incorrect as possible! That's why I continue to be a Cal despite the obvious nature of God's pure, all-encompassing hatred for my Cal Athletics fandom. It is clear my attending these games is "incorrect." After all, I managed to attend the first Pac-12 loss and only 2nd loss for Cal softball all year. And you haven't even gotten to the rugby photo essays later this week yet! What a fun weekend! PREPARE THE TEAR DUCTS! 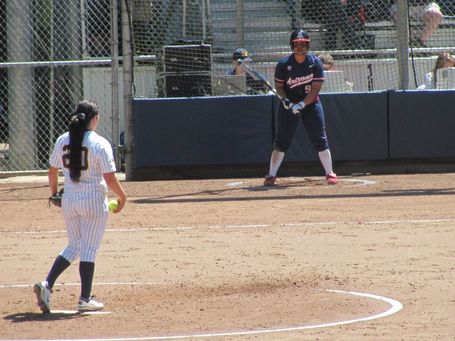 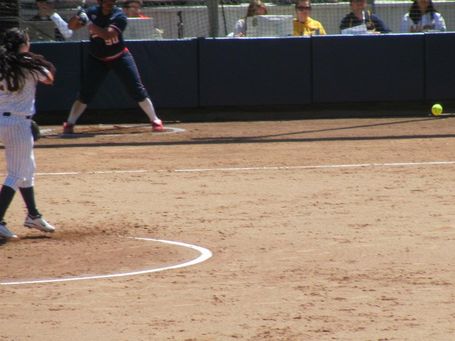 This is Reid doing a "slap" hit. It is apparently where you try to run with the bat while you hit the ball. If you do it right, you smack the ball down into the ground, so it bounces quite high. By the time, a defender can get at it, you are already at first. The softball dimensions are, I believe, somewhat smaller than baseball dimensions, so a few extra moments can be the difference between an infield hit and an out. 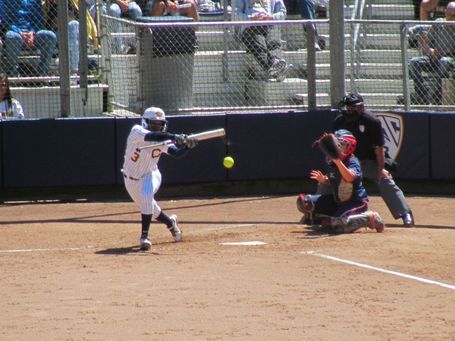 Here is a photo of the afore mentioned Kostreba home run. Well, it is not of the home run, but instead her crossing home plate to an excited team. Sadly, the excitement would not last forever. Arizona would score 5 in the 6th to go up 7-2. 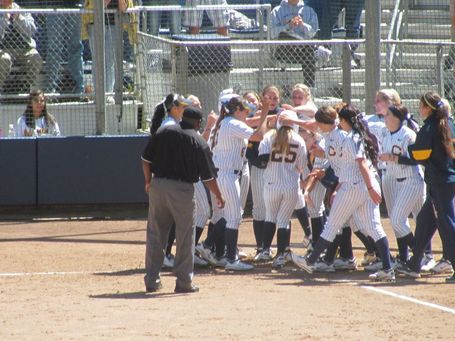 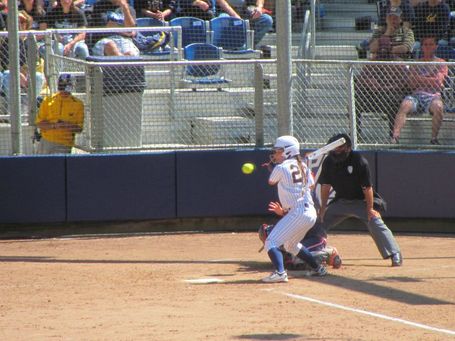 Cal actually got a few runners on in the 7th (softball only goes 7) and made some noise, scoring another run. However, the 7-3 score would be the final. Cal would end up winning 6-0 on Sunday to win 2 out of 3 from the Wildcats in this HUGE series. 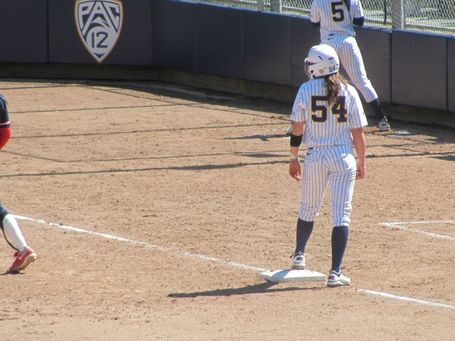 Of course, I went to the losing effort. That is just me! Softball is one of the most amazing stars in the Cal athletics constellation right now. Only my jinxosity can make it stop burning quite so bright. Nonetheless, it was still a lot of fun to get out there and enjoy my first softball game. Like most Olympic sports at Cal, you can go to the game for cheap, watch a high level of competition (if #1 and #13 football teams were going on, Gameday would be in Strawberry Canyon EASY), and hang out in gorgeous environs with your friends. My goal is to try to go to at least one of every Cal sporting events. 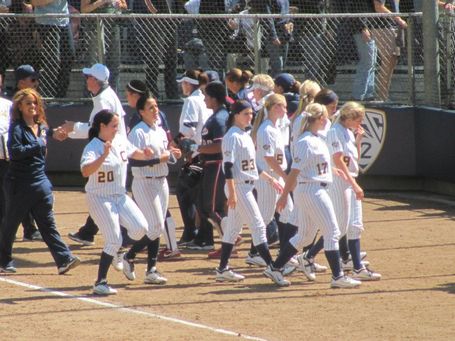