Interesting matchup of more recent Golden Bear football warriors here. Two players who had oddly different college and pro careers. Nnamdi Asomugha had what I felt was a pretty good career at Cal. Then, he got drafted by the Raiders and has had one of the most amazing NFL careers. J.J. Arrington had perhaps the greatest season by a running back at Cal ever. But his pro career was sadly not as productive as we all had hoped. Who moves on to the next round?

This is in the Joe Kapp Regional. Winner here takes on Alex Morgan or Ken Montgomery (who will it be????). The full bracket is here. Full write ups after the jump. Voting ends this Friday, so go vote and GO BEARS!

Nnamdi Asomugha is the true embodiment of a California Golden Bear. On the field, Asomugha propelled himself to become one of the top secondary players in football while at the University of California. Playing safety at Cal, Asomugha was drafted by the Oakland Raiders in 2003 with the 24th overall pick where he then became a cornerback. What a cornerback he would turn out to be.
Since the first day, Asomugha has had to prove the doubters wrong. Many questioned whether or not he was worthy of the high selection, but he silenced all of them for good. After his eight-interception season in 2006, Asomugha earned the reputation of a being a shut-down cornerback. In 2007, one scout told Pro Football Weekly that Nnamdi Asomugha was thrown at "less than any defender in the last ten years." The following year, Nnamdi saw even less action. Opposing quarterbacks tested the top-notch corner a mere 27 times. Asomugha allowed only eight receptions all year. He's a unanimous All-Pro selection on every team and has earned the right to be called, undoubtedly, the best cornerback in the National Football League. He is, without question, the undisputed leader and the heart of the Oakland Raiders 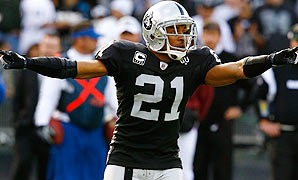 Not only does Asomugha help within his community, he also helps in his mother's homeland of Nigera, since he's born of Igbo descent, an ethnic group in southeastern Nigeria.

Education and community service are his mainstays. Asomugha serves as Advisory Board Chair for his family's foundation, the Orphans and Widows In Need (OWIN) Foundation. Through OWIN, Asomugha and his family provide food, shelter, medicine, vocational training, literacy efforts, and scholarships to widows and orphans victimized by poverty or abuse in Nigeria. 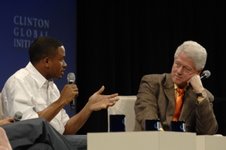 President Clinton's youth initiative designed to challenge college students to take action on some of the most pressing global issues in areas such as education, poverty and global health
Here are some of the awards that Nnamdi Asomugha has been noted for off of the football field.
Outstanding Community Service Nomination (2005, 2006, 2007, 2008)
Commitment to Excellence Award (2006)
Commitment to Excellence Award (2007)
Home Depot Neighborhood MVP (2007)
Sports Illustrated 2008 Sportsman of the Year (2008)
"Do Right Men of 2008" by Essence Magazine (2008)

Arrington had an all time legendary season playing for one of our most prolific teams of the last half century. And he did it sort of out of the blue. I mean, we all knew that Arrington was good and had the potential to step in and do the job, but I don't know that very many Cal fans expected that he would surpass the production of Echemandu's 2003 season, much less run for 2,000 yards. I kind of expected the 2004 Bears to be all about Rodgers and G-Mac. It wasn't.

Kodiak: We had the pleasure of meeting JJ during the spring game of his senior year. He was humble, well-spoken, and polite; he was such a nice young man that it made you want support him even more. He had the best burst of any back that we've seen. Although he didn't have Best's game-breaking speed, Marshawn's strength, Forsett's vision, or Igber's wiggle, he had a unique way of decisively hitting the hole that I've never seen before or since. We've seen shake n' bake. We've seen one cut n' go. JJ was GO. If not for being drafted by the inept Cardinals, I think he might have made some noise in the league. They took an instinctive runner and knee-capped him by forcing him into a wait/delay/read scheme that was a poor fit.

Check out these great highlights from 2004