Interesting matchup here. Former Cal football superstud Andre Carter (you don't want to know what the rumor about him was back at Cal) taking on explosive MBB scorer and sneakerhead Patrick Christopher. This is a 7-10 matchup and both players seem fairly equal in my mind. Definitely tough to figure out who the more awesome person is. Andre Carter would have had more acclaim were it not for the Holmoecaust during which he labored. PC helped Cal win its first Pac-10 title in decades! Who moves on?

This is in the Pappy Waldorf Regional. The winner here takes on Hardy Nickerson or Bruce Snyder. The full bracket is here. Voting ends this Friday so vote now! GO BEARS! 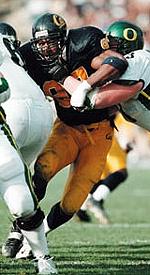 Carter played for the California Golden Bears from 1997-2000. During his junior and senior years he was a unanimous All-Pac 10 Conference selection. In 2000 he won the Morris Trophy, awarded to the Pac 10's top defensive lineman as voted on by the starting offensive lineman from the conference. In addition to being selected as the Golden Bears' most valuable player, Carter was also a finalist for the Bronko Nagurski Trophy, given to the nation's top defensive player. Finished as the school's all-time sacks leader.

When Fujita got to Cal as a 6-4, 195-pound safety who was the last man on the depth chart, his intensity on the practice field routinely perturbed his veteran teammates. "I was kind of the annoying, walk-on, ‘Scout Team All-American' who irritated the old guys," Fujita explained. [...] It was hard not to feel excluded, especially when everyone was lining up for training table and I wasn't allowed to eat. Andre Carter would sneak me food all the time. He really took care of me in every way. He's my brother from another mother."

Ohio Bear:
Great career as a D-lineman at Cal, became a top-10 pick in the NFL draft, and has had a long pro career. On top of that, he has become CGB's meme for "needing an adult." 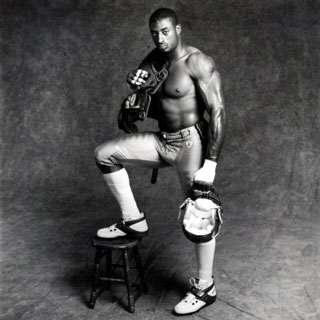 Kodiak:
This guy was an absolute beast off the edge. Could stuff the run, rush the passer, and was known for running down backs/receivers down the field...even on the opposite side. If not for being knee-capped by the Holmoe era, he would have put up unreal #'s.

Similar in speed to Cam Jordan, but not as big. However in terms of motor/focus, he started from day one and was a force even as a true frosh.

PC was recalled fondly by many Golden Bear fans who watched his excellent four-year career unfold. 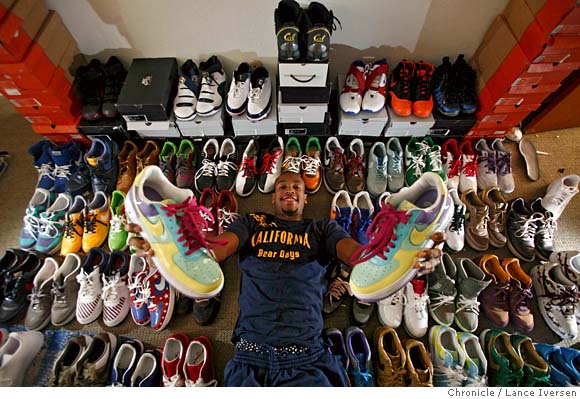 Patrick! Every time we play, I check to see if Pat is on. When he's on, I sit back, relax, and know we'll be in good hands. When he's off...well, at least Randle and Theo usually pick up the slack. But aside from basketball, Patrick just has so much character that it's hard to be mad at him even when he's not having a good game. I sure hope he gets a shot at the pros and develops his game to be more consistent. I'm going to miss checking his sneakers to see if he's found a new pair to play in. ~CaliforniaBone

Someone who really would have benefited from 4 years under Monty. Had all the tools to be a dominant player, yet only showed them occasionally. Almost too nice of a guy to be an elite-level athlete. This year felt more like he was starting to figure things out and would just kill it next year. ~Kodiak

What people will miss the most about PC:
Hammer time on the alley-oops and a shoe collection ~LeonPowe

obviously his athleticism, but he's just a good hearted guy and just very outgoing and easy to approach. Just a cool dude. ~nickle

his fashion sense above and below the rim (hope that taped up knee is ready for the Elite 8, LBJ Jr!) ~Thoroughbred

The step-back J is pretty darn sweet when it's on. ~Kodiak