Our celebration of the 2011 California Golden Bear football seniors continues with Mitchell Schwartz, the Bears' most consistent and solid offensive lineman. (For previous installments of our celebration of Cal seniors, click here for WR Marvin Jones and here for LB Mychal Kendricks.) Schwartz capped off his Cal career with first-team All Pac-12 honors in 2011 and also garnered first-team recognition on the Pac-12 All-Academic team. Schwartz started all 51 games possible from 2008 to 2011 at either left or right tackle. That durability and versatility was part of the reason Schwartz was a three-time winner of the program's Brick Muller Award as Cal's most valuable offensive lineman.

Kodiak: Mitchell Schwartz started 51 consecutive games for the Cal Bears. Wrap your head around that one for a second. It's unusual enough for a redshirt frosh to win a starting job. To show such durability and versatility (played both sides) is rare.

During his time at Cal, he had two different position coaches and three different offensive coordinators. Adapting to new systems wasn't an issue for this cerebral player as evidenced by his all-conference 1st team academic honors.

Although more suited physically for right tackle than left, he was moved to left tackle because he was our best lineman and we simply didn't have any other options. Even playing out of position, he was 1st-team all-conference as a senior.

Besides being smart and tough, he was also disciplined and rarely got called for penalties. He's at his best as a run-blocker; he definitely has a bit of mauler in him and has been known to pile-drive smaller defensive linemen in short-yardage situations.

He might not be ideally suited for pulling, but he's mobile enough to get outside on pitch or sweep plays.

In pass protection, he used his size (6'6) with decent arms and did a good job holding up against bull-rushes.

If there's one area where he occasionally had difficulties, it's with pure speed rushers off the edge.

I would expect him to play right tackle in the NFL. Considering his intelligence and experience playing under two different position coaches with NFL experience (Marshall, Michalczik), he's more ready to play than most rookie linemen. Right now, he's probably slated as a capable backup that teams love to have because he can fill in at either tackle.

Yellow Fever: For what it's worth, McShay has him going at the end of the second to the New York Giants. I think that's better than many expected of him.

Berkelium97: I doubt I am alone in this, but I have had a hard time appreciating our linemen for the past couple seasons. I was under the impression that Schwartz was a pretty good player (1st team all Pac-12), but I was rather surprised to see him as a projected second-round pick on Todd McShay's latest mock draft.

Ohio Bear: No, you are not alone. It's probably unfair for me to think this way, but I do have a hard time appreciating our offensive linemen individually, at least when compared to the guys on the stellar lines we had earlier in Tedford's tenure. But Schwartz is someone we should appreciate. The guy started all 51 games he played as a Cal player. I remember being impressed when Mark Wilson started every game he played as a Cal Bear offensive lineman. There's no reason why I shouldn't be as impressed with Schwartz.

Berkelium97: When I think of our O-line for the past three seasons, I think of Kevin Riley running for his life, endless holding and false start penalties, and Galas shotgun snapping the ball into the stratosphere. Perhaps it is PTSD from the Marshallpocalypse, but I mostly remember what the O-line did wrong recently. As a result, I have almost no recollection of what Schwartz was doing out there. I don't recall him consistently getting beat by his man or racking up scores of holding penalties. He quietly did his job and I am most appreciative that I do not recall being dissatisfied with his performances.

Now that our team has one more year of Michalczik under its belt, I may one day be able to love our offensive linemen again... 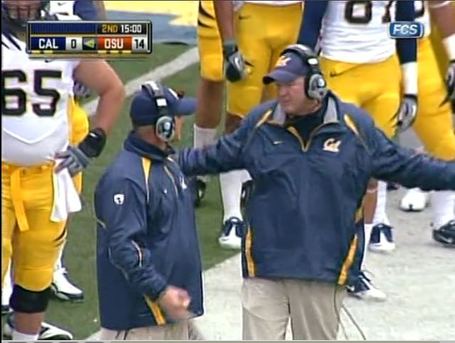 Since Berkelium97 just coined the phrase "Marshallpocalypse," this photo seemed to belong here as a visual aid.

norcalnick: I agree that it's generally pretty hard to appreciate great individual line play. In all my time watching Cal football, only two linemen really jumped out as obviously special players - Ryan O'Callaghan and Alex Mack, two players who were both honored as the best linemen in the conference, I believe. And in Mack's case, I only started paying attention because of the incredible accolades he was receiving.

So I think the best I thing I can say about Schwartz is that I don't remember him ever doing anything wrong. I certainly don't remember many (if any) penalties. I don't recall players sprinting around the left side of the line past him, particularly over the last year or two. Cal's offensive line has had its issues, but the left side of the line was very rarely cupable this past year.

I have no idea if Schwartz has the raw physical talent to become a star lineman in the pros, but I'm reasonable confident he has the technique and drive to at least become a solid starter and enjoy a long and productive career if he avoids injuries.

Hydro Tech: Schwartz was one of those guys that really never got your attention. In most cases, for offensive linemen, that's a good thing. That means they're hitting their blocks and not giving up sacks. Off the top of my head, I really can't remember Schwartz giving up many sacks or whiffing on blocks. He's been a solid contributor to the offensive line. I wouldn't say he's the best Cal has ever had lately, but he's certainly been better than most. I could see him being drafted in the 4th to 6th rounds of the NFL draft.

Avinash: The thing I remember the most about Schwartz is the trust coaching staff put into him, particularly Coach M. He had to come in and start in 2008 as a right tackle, then switched over to left tackle when Mike Tepper went down. As a redshirt freshman! There were growing pains, but the fact that the coaching staff put so much trust into him at that age shows the confidence they had in Schwartz to perform effectively at the position.

Schwartz didn't possess elite footspeed, so there were occasions where he got blown by (usually from a USC defensive end or an Oregon safety) but otherwise I had few complaints about him. He was really a natural right tackle (and he should be an effective one at that), but we had no one to play left tackle his final two years. So Schwartz did what he could at the position. He was a great run blocker and very knowledgeable about trying to leverage his body between the defender and the quarterback. He was durable while being effective, which is probably his most lasting attribute.

He'll be missed this year. Greatly. 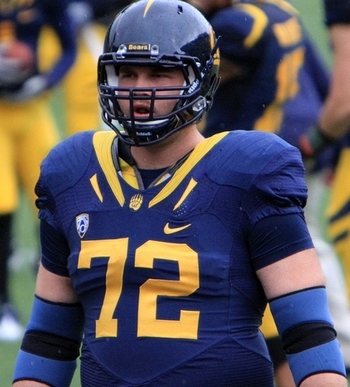 Good luck rodgers in the NFL, Mitchell! Share your memories of Mitchell Schwartz's Cal career in the comments.