Cal's fourth 2013 commitment came Monday night, and like Shon Akins last week, it came from all the way over in Georgia. Archer (Lawrenceville, GA) DB Trevellous (Trey) Cheek made the call for Cal and announced it via twitter. 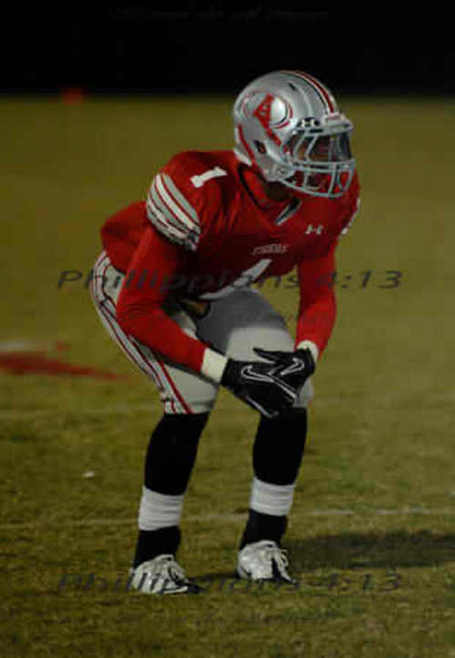 Like fellow Georgian Shon Akins, Cal was the first school to offer Trey. Clearly DB Coach Ashley Ambrose saw something he really liked in Trey's film. Also like Shon, Trey has yet to actually visit Cal. However, he plans to attend the April 21 Junior Day that coincides with Cal's final Spring practice. He's excited to see the campus and feels comfortable in the decision he's made. Here are some quotes courtesy of Bear Territory's free commitment story on Trey:

Cheek committed to the Bears, sight-unseen, but has been enamored with Cal for quite some time.

"I've been doing a lot of research," he said. "I've been looking at the campus online. That's all I do. I look at the Cal highlight videos, I look at their campus and everything. I'm actually coming out there on April 21, for the spring game, and stuff, to take my visit. I'm very excited. I just feel comfortable."

After the jump we'll have Trey's measurables, rankings, highlights, a little analysis and some tidbits from other stories on what kind of player he is.

Scout.com and ESPN have yet to rank and evaluate Trey.

Trey committed to Cal over offers from Kentucky and UCF. He was also receiving interest from Wisconsin, Clemson, Arkansas, Tennessee and Louisville.

A lot to like here. Cheek is aggressive and physical...both in coverage and run support. He can lay the wood. I mentioned it with Akins, but it's even more on display with Cheek. Physical cornerbacks are unique, and that's good to see. He shows no fear of stepping up and tackling, and he has good form. He knows how to play football, which makes sense considering he's a three year varsity player. I like the way he uses his hands, both in press coverage and in fighting off blocks. I think speed concerns are overblown, as he shows he can chase and close with ease. He's very fluid through the hips, which may help compensate for a lack of truly elite speed. He turns and runs well. There was at least one dropped pick-six in there, but that's why he's playing defense. With some coaching, he could be a real shutdown kind of cornerback. Strong, athletic, and quick enough to play up on the line. And he has the physical aspect of the game down. I don't have much issue with his height either. 5'10 and possibly growing is not of much concern to me.

He looks underrated to me. I wonder if the lack of balls thrown his way last year (only 12) had something to do with the lack of recruiting interest. But hey, of the 12 passes thrown this way, Cheek broke up 9 of them. That's pretty damn good.

CBS did a writeup on the New level Athletics Elite 7 on 7 camp back at the beginning of March and had some very good things to say about Trey. This was right after Cal offered, so it discusses how trey feel about the Cal offer and how he did on the day. SPOILER ALERT! He likes Cal, and did really well:

Lawrenceville (Ga.) defensive back Trevellous 'Tre' Cheek was one of the standouts from the first day of competition at the NLA Elite 7-on-7. His play between the lines might have had something to do with his good day outside of them after picking up his first offer from California.

"I've always wanted to go to a (school like) Cal," Cheek said. "They're a great school and great at football too. I have family about an hour away."

While it might sound strange for a Georgia corner to be familiar with the Bears and hold them in high regard, there's a reason he is already planning on a visit out West. Cheek has talked with several members of the team already in order to get to know the program better, including McDonough (Ga.) defensive back Avery Sebastian, a 2011 signee from the area. As a result of being the first to offer, Cal has a slight edge at the moment over other schools - including his childhood favorite.

Though there were no really big wide receivers at the event, Cheek handled just about everyone with ease on Saturday. He often played press coverage and had no problem turning to run after getting a good jam on the line of scrimmage. His ability to play up close to the offense, Cheek said, is one of the reasons several coaching staffs have been talking to him quite a bit.

SI also did a quick writeup on the NLA 7 on 7 camp. Here's what they had to say about Trey:

Lawrenceville (Ga.) Archer cornerback Trevellous Cheek has been somewhat overshadowed by teammate Antonio Riles early in the 2013 recruiting process, but as Cheek demonstrated at the recent New Level Athletics 7 v. 7 near Atlanta, he has the quickness, hips and ball skills to be a dangerous D-I level defensive back. California and Kentucky recently became the first two schools to make offers, but others, including Louisville, seem ready to follow suit.

Cheek also attended the same Rivals/VTO camp in Marietta, GA that Shon Akins did three weeks ago. He was identified as a "sleeper" whose performance impressed the analysts in attendance. Here's what they had to say about Trey:

Unlike many on this list, Cheek already does have some offers. Yet, he probably still doesn't get the notoriety he deserves. The 5-foot-10, 175-pounder is a solid corner who loves to be challenges and thrives in press coverage. He is stronger than he looks, has better-than-average speed and terrific hips. At times, he can be too aggressive, but that is something that can be addressed.

I'm pleased with this commitment. I liked it before really watching Trey's highlights, and now I really like it. He's an athletic kid that likes to hit and play physical. He said it himself above, but you can coach a kid how to cover, you can't coach physciality. I think he has a lot of upside, and is already good.

This is a year where we will need to take at least 4 DB's. With two already in the fold, I'm feeling good. As I said with Shon Akins, ignore the lack of evals and star ratings for a minute and just watch the film. Trey can play. I'm getting more comfortable with Coach Ambrose being first to offer some of these guys. It's paying off.

I also don't have much concern with Trey committing prior to seeing Berkeley. He'll be out here in a week and a half, and his commenets would lead me to belive he's done his due diligence. he's stated he's done and happy to be committed. he also has family inthe area. I consider Akins' commitment to be far more tenuous than Cheek's. That said, the allure of a big time program in SEC country offering will be something to watch in the fall. Florida is Cheek's childhood favorite, so you never know.

Still, we should enjoy this. We just got a commitment from a good player at a position of need. GO BEARS!