On March 3, 2012, Cal baseball took on Lehigh of Bethlehem, PA. Lehigh traveled the 2,800 miles out to Berkeley for a Saturday day game on what was a truly amazing and gorgeous day at Evans diamond. The good guys won 9-3 on Saturday! They also beat Lehigh on Sunday in both double header games to sweep the Mountainhawks (nee Engineers). The first game was 10-0 and the second game was 18 (!) -3. Total weekend score of 37-6.

I guess what I am trying to say is that Cal is pretty pretty good at baseball compared to Lehigh. I can't speak to the Sunday games, but the Saturday game saw great pitching from ace Justin Jones, poor defense from Lehigh, and great hitting up and down the lineup.

There were a lot of scouts out to see Justin Jones, named a third-team pre-season All-American. 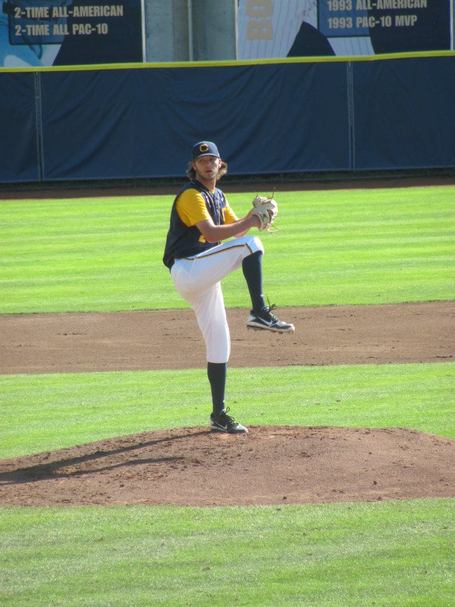 He didn't disappoint, pitching 7 strong innings and giving up zero runs. Sweet! More photos and thoughts on the game after the jump. GO BEARS!

Lehigh's school colors are brown and white, which is a really poor combination in my view. 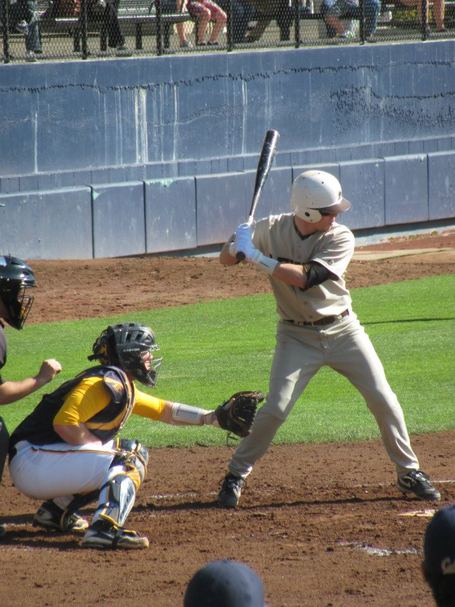 They look like a 19th century baseball team (really for more than one reason, but let's just focus on the minimalist uniforms). Cal's bright blue and gold sleeveless unis have a Bill Veeck theme to them. 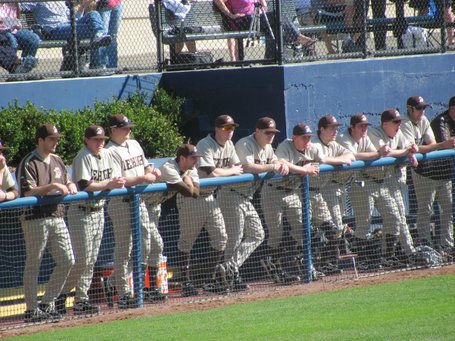 Here is the box score for the game. This is a photo of Derek Campbell crossing homeplate after hitting a 2nd inning home run to put Cal up 2-0. 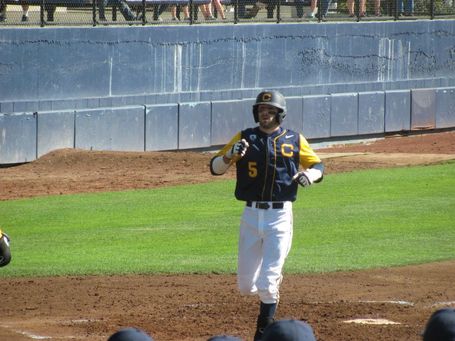 The team came out to congratulate him! 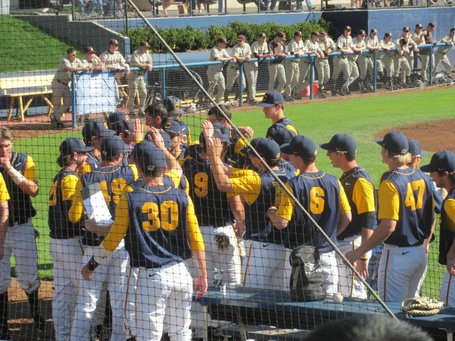 Here was my attempt to capture Danny Oh's 3rd inning, bases loaded hit to score 2 more runs. I tried to get the framing right, but got too excited when he hit the ball and got it all wrong. Oh well. 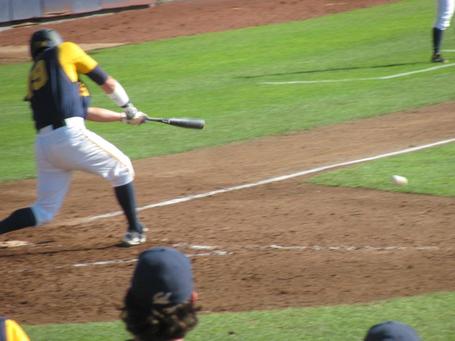 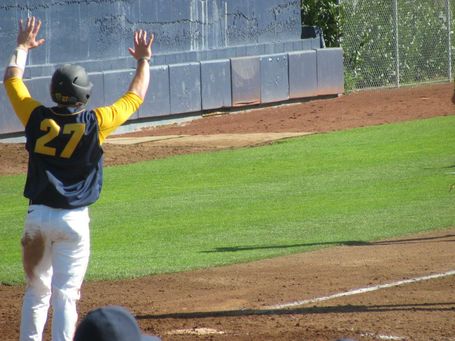 After 3 innings, Cal was up 6-0, as they scored 1 in the 1st, 1 in the 2nd, and 4 in the 3rd. They also scored another run in the 4th, thanks to 2 Lehigh errors. I do not think that Lehigh would have won the game if they had cut down on their 3 errors, but it would have been a bit closer. They definitely gave Cal a few extra chances that Cal took advantage of. The errors were on really basic things, like throws to 1st base.

So, there wasn't a lot of drama. There wasn't any back and forth. The worst part of the day was pretty much the weather. It was really, really hot at Evans. It felt like a summertime game. Thanks, global warming! I was not really ready for it and failed on the sunscreen angle 100%. Inexplicably, I did not burn at all. Maybe I should thank global warming for that, too!

This was the first time I got the chance to see former Cal QB Ryan Wertenberger get in a game. Here he is warming up: 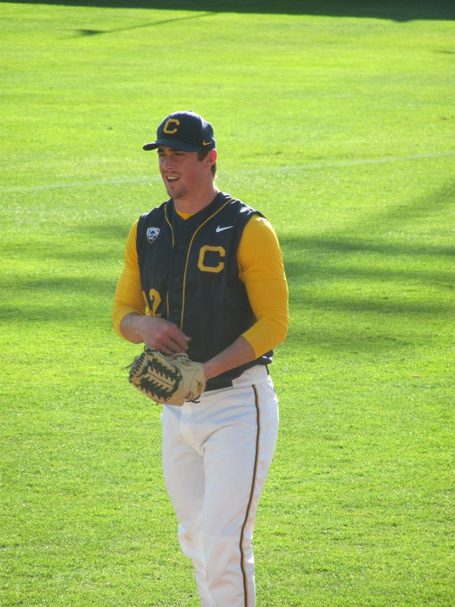 Cal put up 2 more runs in the 7th to get to that 9 spot. Speaking of footballers, Tight End Jacob Wark got some action. He pitch hit for DH Vince Bruno and flied out. Oh well. 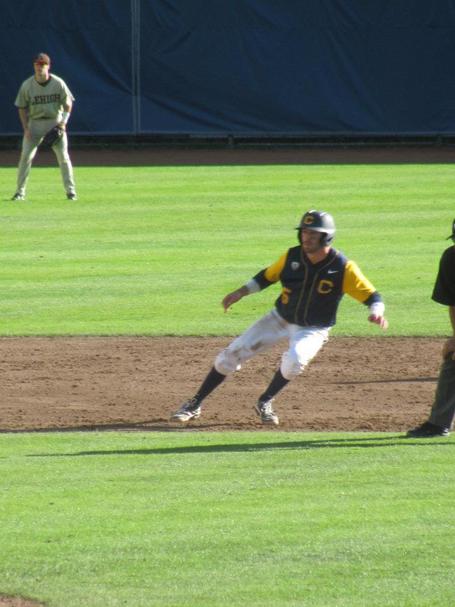 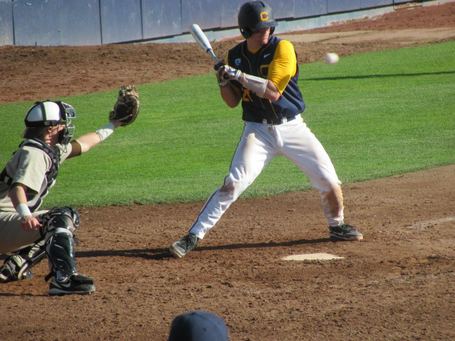 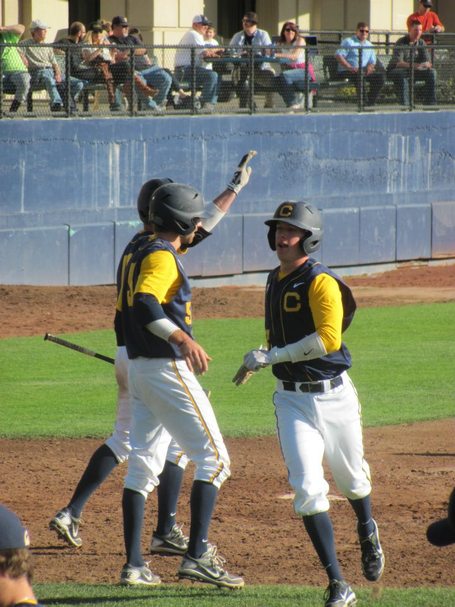 Here is Wertenberger in action. He pitched 1 inning, gave up 1 hit and K'd one dude: 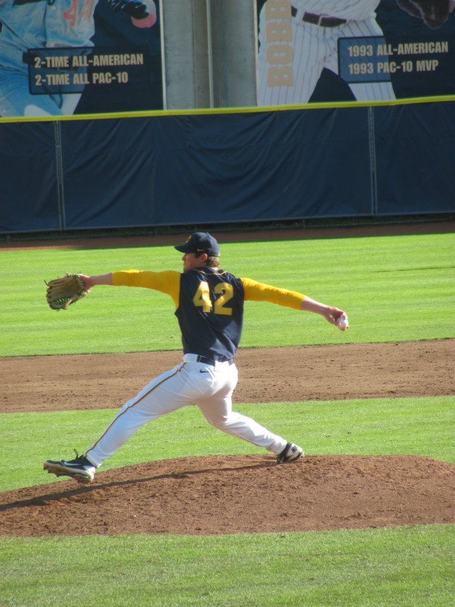 A few football players, including fellow QB Brock Mansion, showed up midway through the game to root on the Bears. They were not as energetic as the last time, but also the game was not as close.

Lehigh did put up 3 runs in the 9th off of Ryan Sandler, who sidewinds. 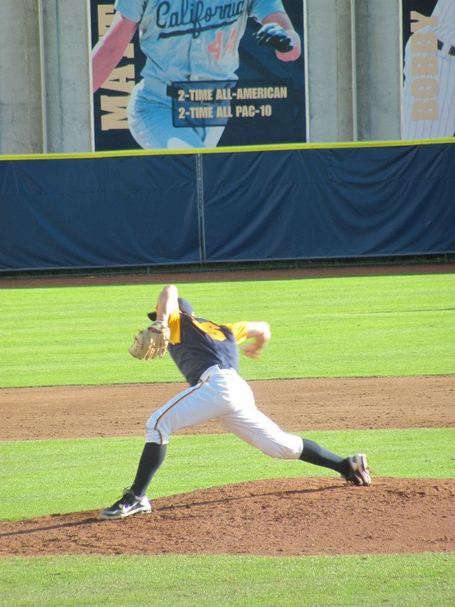 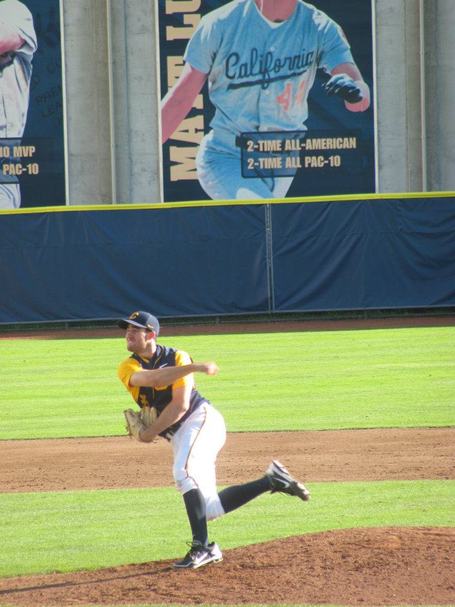 But despite their last ditch gasp, Lehigh ran out of outs and the game was over: 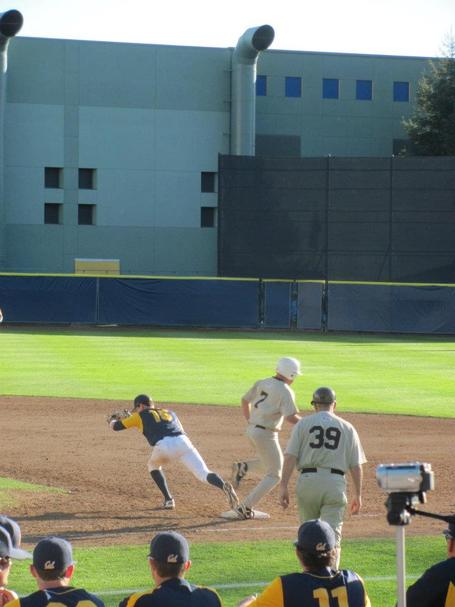 The scoreboard operator oddly never put up that 3rd run for Lehigh, so this is slightly inaccurate. 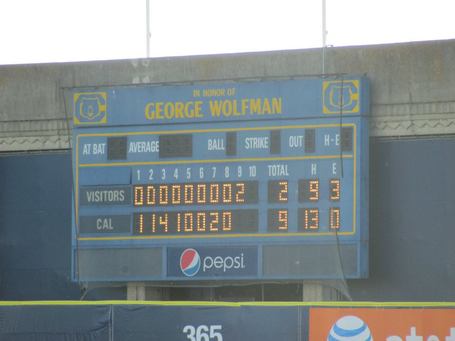 GO BEARS! After the game, we went next door to Hellman to see the women's tennis team take on Pepperdine. I'll be the first (also, second and third) to admit that I really don't know how tennis works. I don't really get the scoring. I mostly just watched and figured out how things were going based on the cheers from the crowd. It is kind of like when I go to a rugby game. Our angle wasn't very good, but it was the only place in the complex with shade. Beloved, beloved shade. 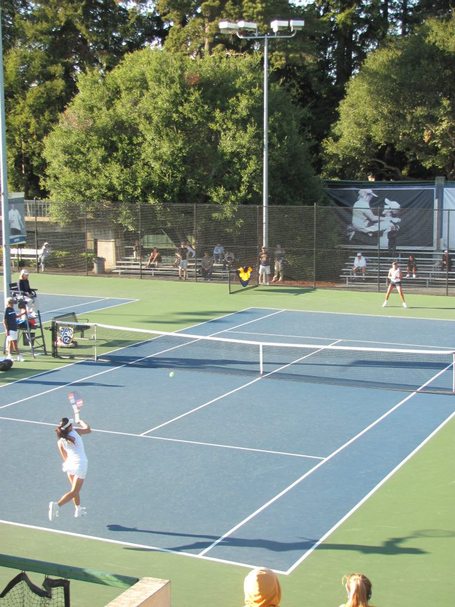 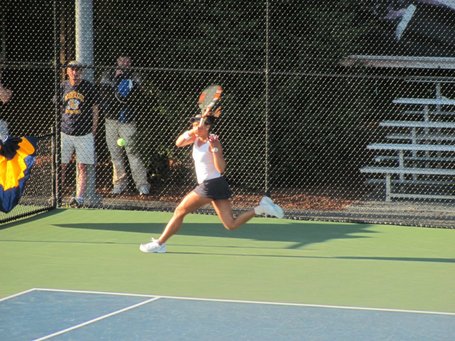 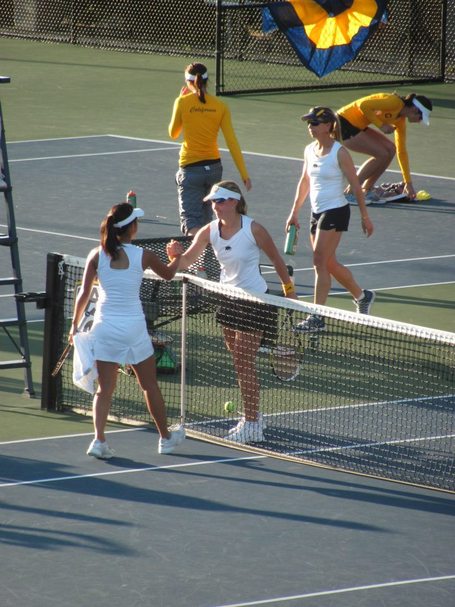 It appears based off of the numbers on top that Cal won 5-2. So, GO BEARS! 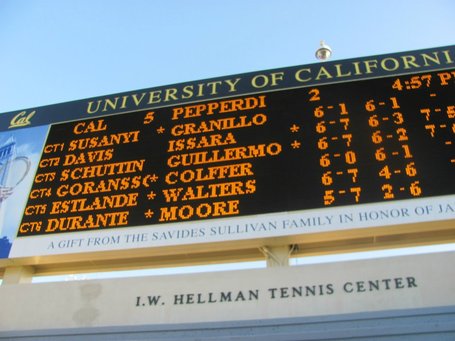