Twenty-one Cal football seniors concluded their Golden Bear careers in 2011. None of them was more valuable than linebacker Mychal Kendricks. Kendricks capped off his Cal career with a season to remember in 2011. The Fresno native racked up 106 tackles, 14.5 tackles for loss (including three sacks), and two fumble recoveries on his way to capturing the 2011 Pat Tillman Pac-12 Defensive Player of the Year Award. Kendricks played in all 51 games possible during his four seasons at Cal (2008 to 2011) and finished his career with 258 tackles, good for ninth all-time in the program's history. He was also somewhat of a stat-sheet stuffer in his career: his ledger includes 36.5 tackles for loss (13.5 sacks), seven fumble recoveries, four interceptions (one for a touchdown), a forced fumble, and a blocked punt.

Today, Mychal Kendricks leads off CGB's Remembering the Seniors series. Remember away! And see you in the NFL, Mychal.

Avinash: To start us off, HydroTech, could you relate to us the story that you heard about Kendricks when you worked with the team? And how would you say he performed relative to the standards set in the story?

Hydro Tech: I have two stories to tell of Mychal. First, was a memory from the 2008 Emerald Bowl luncheon. That day, while the team was having lunch with Miami as a part of the pre-game festivities, Zack Follett took the stage for a brief interview with the host. The host was asking Zack how this game would go down. Zack started talking about how he thought Cal was going to dominate Miami and how they were really going to get after the QB, but it wouldn't be him sacking the QB too much because he was being used in a different role this game. Immediately it became apparent that Zack was perhaps talking too much and revealing a bit of Cal's defensive gameplan. Mychal was seated at a table next to me and quietly hissed to our table, "he's saying too much!" with a very concerned look on his face. The other, and more senior, Cal players at my table agreed but couldn't help just laugh about it all.

My second memory, was during a Cal banquet dinner for the football team. I can't remember when it was or for what purpose, but former Cal linebacker Worrell Williams was on the stage accepting an award. He thanked the usual folks but then made an effort to single out Mychal Kendricks as Cal's next greatest linebacker. Worrell said that he thought Mychal had the potential to be great and even better than him. It looks like Worrell was right.

Ohio Bear: I remember Mychal Kendricks' first game as a Bear. He was a true freshman, playing in the season opener at Memorial Stadium against Michigan State. In the 4th quarter, I believe it was, with Cal about to get the ball back on an MSU punt and perhaps seize control of the game once and for all, Kendricks made a mental mistake and roughed the punter. It gave Michigan State a first down, which the Spartans parlayed into points.

From that mistake of freshman zealousness, Kendricks progressed on a steady career that culminated in him being the Pat Tillman Pac-12 Defensive Player of the Year as a senior. Kendricks was a guy, I think, that a lot of Cal fans expected a lot out of because of the story that Hydro Tech tells about WW saying Kendricks would be a great one. Yet, even though Kendricks was a steady contributor to our defense, I wondered whether he would live up to that. Well, if he didn't before his senior year, his Defensive POTY season showed that WW knew what he was talking about -- and showed why the coaching staff couldn't keep him off the field way back when he was a freshman.

Avinash: Do any signature moments stand out to you for Kendricks and for what reasons? 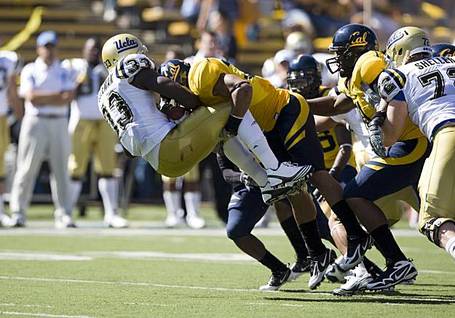 solarise: Fantastic from every angle. 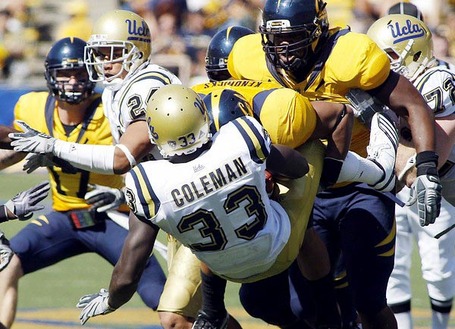 1. The pick six that clinched the game at Ucla in 2009, when we had only 10 men on the field on defense. That was a great catch by Kendricks.
2. The next year against Ucla at home -- The Tackle.
3. Senior year, vs. Utah at AT&T Park: with Utah making its most promising drive of the first half to perhaps get back into the game right before halftime, Kendricks stepped in front of a pass and returned it down the left sideline into Utah territory. Instead of the Utes scoring before half, Cal got a TD and pretty much put the game away right there.
4. The Big Game, 2011: Kendricks was all over the field. He was a man possessed. It was a great performance in defeat.
TwistNHook: My favorite memory of Kendricks is that he was players #10 and #11 in that great moment in the Cal-UCLA 2009 game where he got a pick six to seal the deal for the Golden Bears! Wins in LA are rare these days for us, so any one (also, the ONLY one) coming from Kendricks' hands is huge! YAY!
Kodiak: I remember that Kendricks burst out of the gates as was tremendously productive as a youngster, even leading the team in tackles in his first starts at ILB. This was unusual in and of itself because young LBs usually struggle to find the ball. He had a knack for being in the right place. With his speed, I do wonder what his career might have been like if they had kept him on the outside as a pass-rushing threat. However, it's hard to argue with his productivity once he adjusted to the reads and coverages inside.
Ohio Bear: We'll miss Kendricks. He was a good one.

What are your thoughts on Mychal Kendricks? Share them in the comments.