The second verbal commitment of the 2013 recruiting season didn't come long after the first one, as Stockdale (Bakersfield, CA) running back DJ Martin made the call to Cal on Monday night. This is a very good pickup. 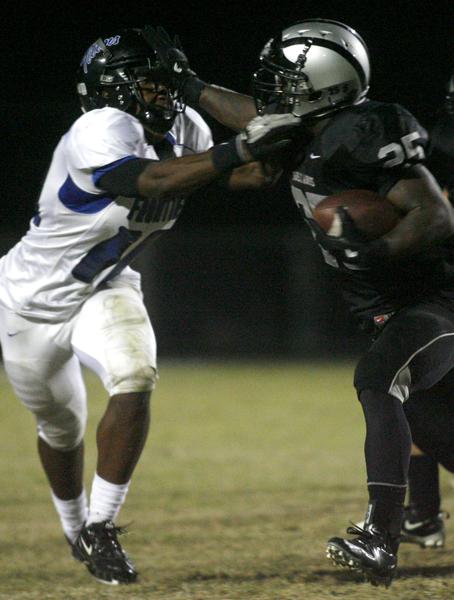 via bakersfield.com. DJ is the one on the right...just in case you were wondering.

Martin was named the Cal State Sophomore of the Year in 2010 after rushing for 1900 yards and 23 touchdowns. A brief transfer and ensuing eligibility issues led to a shortened 2011 season where he played in only 5 games. He still managed to rush for 900 yards and 11 touchdowns though. Wait till you see his sophomore year highlights though. WOWZERS.

After the jump we'll have measurables, rankings, highlights, my own quick analysis and some tidbits from other stories on DJ's commitment to Cal.

Rivals.com ranks DJ as a 4-star prospect and the #24 running back in the nation

Scout.com ranks DJ as a 3-star prospect and the #35 running back in the nation

DJ also held offers from UCLA, Vanderbilt, and Tennessee, while also receiving interest from Alabama, Georgia Tech, USC and others.

Here are DJ's 2010 highlights. This was when he was a sophomore. A SOPHOMORE!

Doesn't take a genius to see that this kid runs ANGRY. I love the way he isn't afraid to initiate contact. Hell, he seems to look for it and treat would be tacklers like they've personally offended him. Once he gets to the second level, defensive backs might as well be speed bumps. He runs with a unique combination of balance and power, executing subtle moves that don't seem to slow him down much while causing tacklers to find themselves on the wrong foot immediately. If he's got a head of steam at the point of contact in the open field, you can pretty much cancel Christmas. Try to tackle DJ low, and you'll get a thigh upside the earhole of your helmet and find yourself on the local news (4:12 mark). Go high, and it'll take you and two of your buddies to bring him down...after he gets about 8 more yards from dragging you like a plowhorse (4:00 mark). He's got a very strong lower body. His speed isn't elite, but it's still very good. He also has enough burst to find space, while changing gears quickly. He's a unique combination of explosion and strength. I think comparisons to Maurice Jones Drew are pretty accurate. He's taller, and not quite as fast (yet) but runs in a similar fashion. That's a good thing. As most high school running backs tend to do, he pushes more runs to the outside than he needs to. Maybe he just likes to hunt defensive backs? Not much more needs to be said here. Power back. Punisher. YES.

Oh, and watch the 5:34 mark of the video. That deserves mention for sure.

Jim McGill of Bear Insider was able to get some comments from DJ on his Cal commitment. The full story can be found here. Free!

DJ discusses Cal's recruitment of him. He's been on Coach Gould's radar for a while:

"Cal started recruiting me my freshman year," said Martin. "They were the first ones I heard from.

"Coach G's been my main recruiter. We really connected when we first started talking. He's a really good guy and a Christian man and I really believe in him and the results he gets with his players.

"I'll always put my full effort into anything he needs me to do. I really feel like with his coaching style and methods, I'll always strive to get the most out of my ability."

DJ discusses how much he respects Coach Gould's track record and how he's been a Cal fan for a long time:

"One thing that kind of hooked me was the success that Coach G's had with getting his running backs to the pro's.

"Marshawn Lynch, Justin Forsett, Jahvid Best, Shane Vereen -I followed all of them when they were at Cal. I watch them whenever they play on tv. I've always been a Cal fan and have just been waiting for the opportunity."

On what he plans to work on this season:

"I don't dwell too much on what I'm good at," said Martin. "I think more about what I need to do to get better.

"I'd like to improve my footwork and just getting my pads low and delivering the hit before they hit me. I've just got more stuff to work on to continue to get better."

Lots to like there. Lifelong Cal fan, great relationship with Coach Gould, and determined to get better. Dig it!

So....just to slightly taper your expectations, 247's brief writeup on DJ's commitment did include the following morsel:

"I'm still going to take my visits later this Fall," he said. "I will visit Alabama, USC, Georgia Tech and some others. I'll make my final, firm decision closer to signing day."

I have no problem with a committed kid taking visits (they should), but a visit to Bama or SC is reason for some concern. Hopefully DJ's reasons for picking Cal in the first place hold true in the end.

It's okay to have some reservations about the firmness of DJ's commitment to Cal, but there's a few things I gleaned from his comments to Jim McGill that should make everyone feel better. First off, he's a Cal fan. He even called the offer from Cal his "dream offer". Not something you hear to often these days. He also has a tremendous amount of respect for Coach Gould. He likes him, likes his style, and really likes his lengthy resume when it comes to producing NFL-caliber running backs. We've also been on the kid longer than anyone else. And proximity to his home in Bakersfield is a big plus when it comes to getting his folks out or games. Those are all big factors. Would I be stunned if DJ ended up elsewhere when it's all said and done? No. But I'd be plenty disappointed. This guy is a the kind of runner we desperately need this year. He's a bruising, power guy who also has enough burst to house it once he gets to the second level, leaving a trail of broken high school defensive backs in his wake. With DJ in the fold, expect Cal to ramp up its pursuit of a complimentary speed/finesse back like Taquan Mizzell, Terrell Newby or TJ Logan. Big pickup for us!