QBs have gotten better and better at diagnosing coverages pre-snap. Defenses, if they hope to confuse the QB, must take countermeasures to prevent them from being read so easily. How so? Disguising the coverage. Let's take a look at how Cal used such a disguise against Arizona State in 2011. 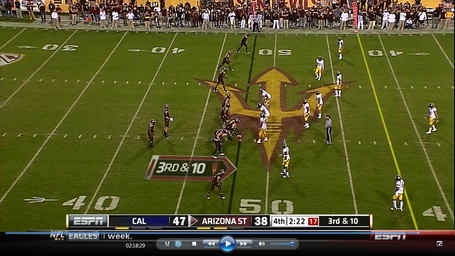 The play I want to break down occurred late in the fourth quarter. Cal is defending a 9 point lead. The down is 3rd and 10 at around midfield. There is only 2 minutes and 22 seconds left on the clock. Arizona State needs two quick scores to take the lead. With such a short amount of time remaining in the game, the offense must pass -- giving the defense an ideal opportunity to disguise coverages. 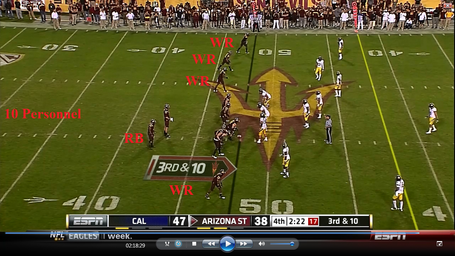 The Arizona State Sun Devils come out in 10 personnel (4 WRs, 1 RB). The QB is in shotgun, and there are trips WRs left. The RB is offset to the weak side, and short side of the field. 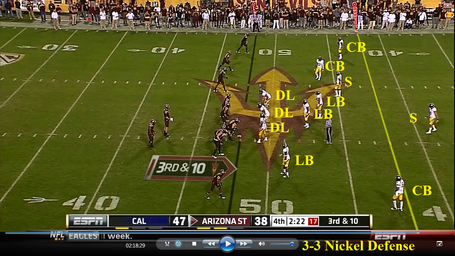 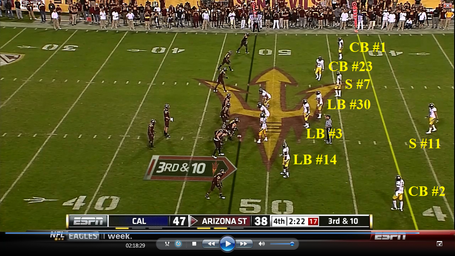 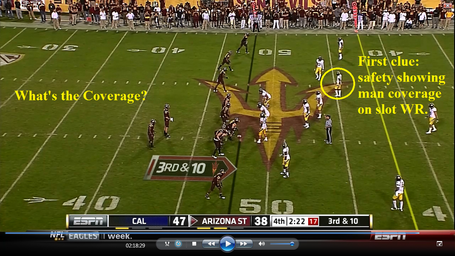 The first thing the QB is trying to figure out before the snap is the defensive coverage. There are a couple of hints as to the coverage prior to the snap.

The first hint is the fact that Cal safety #7 has dropped down into the near slot to cover the near slot WR. This indicates man coverage. 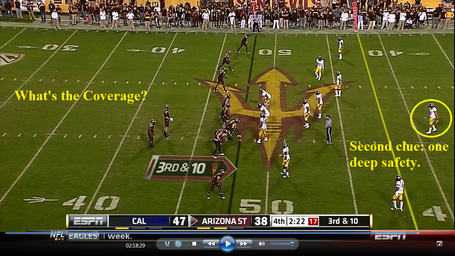 The second clue is that Cal is only showing one deep safety (Cal safety #11). This is indicative of a Cover-1 look. 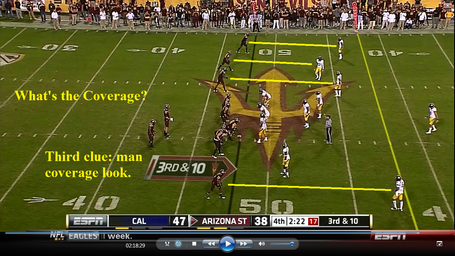 The third clue is that the defense as a whole, is showing a man coverage look. Note how the Cal DBs are lined up directly across from their respective assignments and are squared upon their defenders. 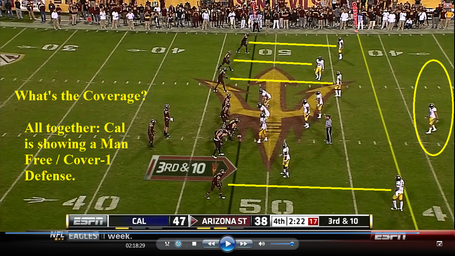 All together, this looks to me like a Man Free / Cover-1 defense. This defense has one deep safety, with the rest of the coverage defenders in man coverage. 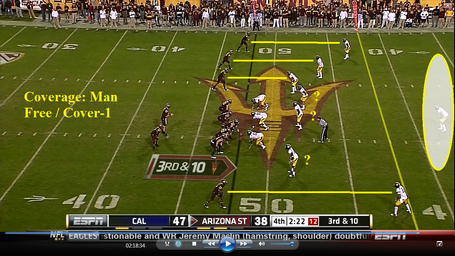 Now that we've figured out what the coverage defenders are doing (all 5 of them), we have to figure out what the rest of the 6 defenders are doing. We have 3 defensive linemen, presumably who will pass rush. And then we also have 3 linebackers, whom we don't know what they will be doing. They could drop into coverage. They could pass rush. Who knows. So the offense could be looking at anywhere from 3 to 6 pass rushers. The offense line should have their eyes on the Cal linebackers post-snap to see what they do. 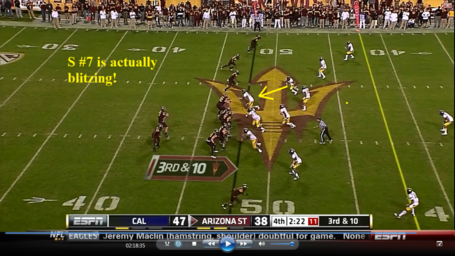 Here's the post-snap picture. Cal S #7 is blitzing! Oh noes! He was a defender that was showing coverage against a WR! In other words, it didn't look like he was going to be a pass rusher! What's going to happen now? Will the offense notice this blitzing safety??? 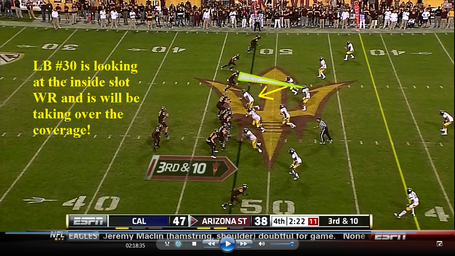 If Cal S #7 came off his WR to blitz, then who is covering that inner slot WR? Cal LB #30 will. He is now looking over at that inner slot WR and is dropping back into a trail man coverage! Tricky! This is a coverage exchange! This is DISGUISING the defense! 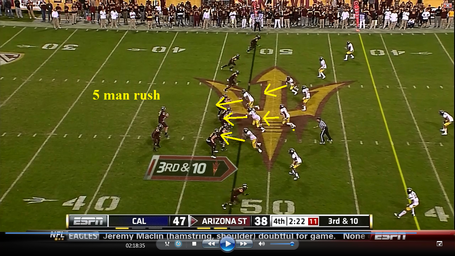 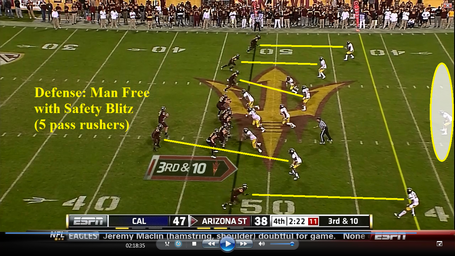 Because of that coverage exchange between the blitzing safety (Cal S #7) and the linebacker (Cal LB #30), the coverage is STILL Man Free. More specifically, it's a Man Free with a Safety Blitz (sometimes called "bandit"). 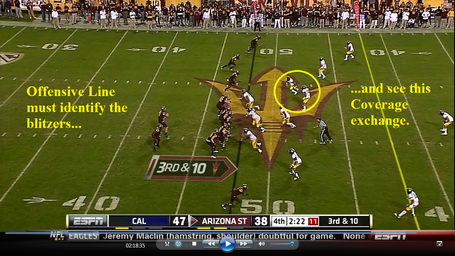 Will the Sun Devil offensive line recognize this disguised blitzer? 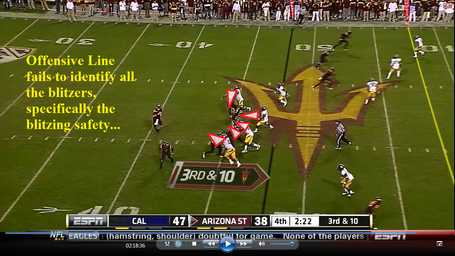 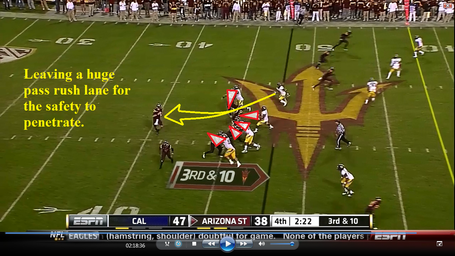 The failure of the offensive line to identify the blitzing safety leaves a HUGE alley and pass rushing lane for the safety to penetrate! The safety is able to penetrate quickly and force the QB to pass the ball before he wants to! 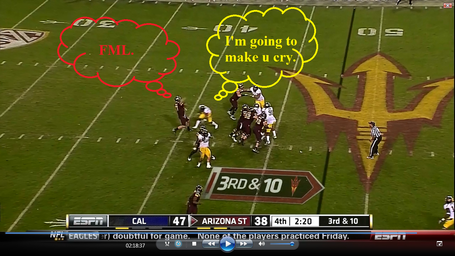 The blitzing Cal safety gets a free, uncontested hit on the Sun Devil QB! 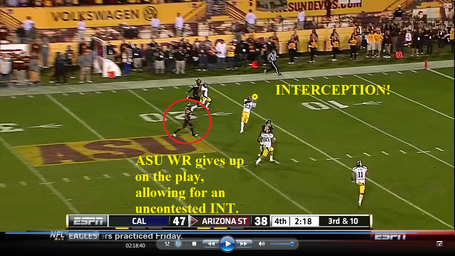 The result is an interception! Cal CB #23 intercepts the ball. It's worth noting also that the Arizona State WR whom Cal CB #23 was covering also seemed to give up on the play. He slowed up as the ball was in the air and gave an easy uncontested interception to the defense. That kind of lackadaisical work ethic sure won't get him far in life!

Check out the video below to see the play in its entirety! (You will have to scroll forward to 8:06 in the video, or just click on this link which will open up a new window with the video pre-set to start at the correct time)

Keep it locked in for a special addendum to this post, coming soon.

Special thanks to TouchedTheAxeIn82 and everyone else who helps create and seed these games. Without your help, I can't do this stuff.

My other analysis posts can be found here.