In the midst of NCAA Tournament wackiness late Friday afternoon, the news trickled out that Cal had received its first verbal commitment of the 2013 football recruiting season: Marin Catholic QB Jared Goff. 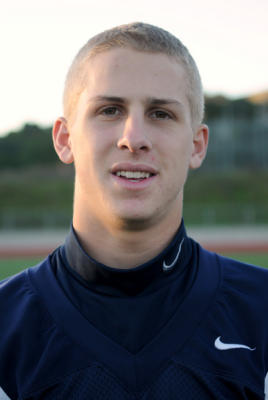 Jared is a Bay Area guy, whose father Jerry was a baseball player at Cal. He had a tremendous statistical season last year for Marin Catholic, throwing for over 3200 yards and 44 touchdowns to only 4 interceptions. In fact, the San Francisco Chronicle named Jared as their Second Team All-Metro QB. Know who the First Team QB was? Our own Zach Kline! Jared was also named the MCAL League MVP for the 2011 season. Not bad for a junior.

After the jump, we'll have Jared's measurables, recruit rankings, highlights, and some analysis, along with links to some stories about his commitment.

Scout.com ranks Jared as a 4-star prospect and the #19 QB in the nation

Here are Jared's 2011 highlights. He led Marin Catholic to a 13-1 record and an appearance in the CIF Finals, where they lost to a game Campolindo team.

The first thing to take notice of is the Marin Catholic runs a pass-heavy offense. Four wideouts, primarily shotgun and pistol sets. Past Cal QB's like Austin Hinder and Kyle Boehm have come from run-heavy offenses...no such concern here. While this certainly gives Goff ample opportunity to showcase his skills, I'd be encouraged to see how he handles snaps under center. Clearly he has a good arm; he has no trouble with deep balls and frequently hits his targets in stride. Also encouraging is his 64% accuracy, especially considering how often he throws. He has good mechanics, which is a testament to his athleticism. Also, just like Kyle Boehm and Zack Kline before him, Goff is a protege of renowned QB coach Roger Theder.

I found Jared to be much more mobile than I expected him to be. He shows good mobility in the pocket, is able to evade a rush, and isn't afraid to tuck and run if necessary. This should not have come as a shock to me, as Jared is a three sport athlete (football, basketball and baseball) and that athleticism shines through in the way he plays the quarterback position. He isn't the kind of runner that Kyle Boehm was at that level, but he's no statue back there.

He does need to add some muscle, but this doesn't concern me much as he's still a Junior in high school. He has a frame that can support 215+ pounds with ease. Blasquez'd. My only other "concern" is the level of competition Goff was facing in the MCAL. Marin Catholic thrashed their league foes, and the above highlight shows a group of receivers than clearly outclassed most of the defensive backfields they faced. Goff struggled when he faced better defenses like that of St. Ignatius and specifically a potent secondary in the CIF Title game against Campo. That said, Marin Catholic annihilated a very good Encinal team in the CIF semifinals. So maybe I'm just picking nits.

I do believe that one of the things holding Goff back from receiving more attention up till now from recruiting services is the lackluster league competition he faced though. Some time on the camp circuit should see him get much more attention as all the pieces seem to be there. He certainly looks like the top 2013 quarterback in the Bay Area to me.

There are good stories on Jared's Cal commitment at both Bear Insider and Bear Territory. Here are the links:

Bear Territory: Goff Talks at Length About His Cal Pledge ($)

The Bear Insider piece has some great quotes from the man himself Here are some nuggets.

Regarding his commitment to Cal:

"I'm really excited about my commitment to Cal," said Goff. "Everything about it was a perfect fit for me. Between the atmosphere at Cal, the location, a coaching staff I feel real comfortable with, the offense they run -just everything about them was perfect for me and what I want in college.

"When they offered, I thought, 'You know, this is a great spot for me.'

"So I though about it for a month and talked a lot with my parents and the decision really came down to, 'Is there anyone else I'd rather play for than Cal?' And the answer was no. It's just the best place for me."

Here's Jared's comments on his strengths and what he plans to work on this season as well:

"I feel like my strengths now are that I have a good arm and have good accuracy," said Goff. "I also feel like I can keep my eyes downfield and escape pressure when needed.

"My goals for this year and to gain a bit more weight and continue to work on my leadershship and the mental part of the game."

And oh yes, Jared plans to start recruiting for Cal as well:

"I'm looking forward to talking to guys I know and that are in my area in Northern California and on the West Coast, like Zach did at Cal,"said Goff.

"It's a really good tactic as far as I'm concerned. If you have guys you've worked with or who you like and have chemistry with and try and get them to go where you go, it helps a lot."

Personally, I'm very pleased with this commitment. Cal will take one quarterback in every class, and locking up arguably the top QB in the Bay Area at this juncture is big...especially after the way that the 2012 recruiting season finished up. Jared also seems like a really solid kid and certainly a guy that loves Cal and is excited to be a Golden Bear. The fact that he's also a very good football player is gravy.

Welcome aboard, Jared. The Cal family is happy to have you!