The Bears are jumping for joy as they make their way onto their chartered flight to South Bend for the NCAA tournament. Meanwhile, Cal fans are stuck waiting for Sunday morning to roll around. If you're as impatient as I am, kill some time by joining CGB's Women's NCAA Tournament Challenge group! Just follow these instructions:

1. Click on this link
2. If necessary, create an account with ESPN
3. Create your bracket
4. Click 'Join a Group'
5. Type 'california golden blogs' into the search bar
6. Enter the following password to join the group: gobears

Now, on to some actual game content! To start off, we've got some pre-game comments from Iowa coach Lisa Bluder:

Q. What can be exploited with Cal? COACH BLUDER: Well, they are not as good an outside shooting team as what we have faced and they are not as good of a free throw shooting team as what we have seen. I think sometimes they can get a little shaken or out of control running their offense. But those are you know, basically, I would say those three things are the things that we need to look at.

I do feel like Cal has improved as a team shooting free throws, to the point where teams can't foul as a strategy and really expect it to work. But based on these comments you would expect Iowa to come out aggressively on defense to make Cal play out of control, and that they won't be afraid to be physical and pick up fouls. But we'll see.

Q. You mentioned the perimeter shooting; do you guys practice zone more often then?

COACH BLUDER: Yeah, we have not seen a whole lot of people play zone against them, but that's part of what we are and we will continue to do a little bit of each.

It seems like not as many teams have been throwing a zone at Cal as they did earlier in the season, but that may just be selection bias since we often can't watch road games.

ESPN's Raleigh regional preview barely mentions Cal. But they do provide some useful insight into a couple of players that Cal will have to deal with:

Samantha Logic, Iowa: The season-ending injury that felled Iowa standout Jaime Printy left the Hawkeyes hobbled and makes them anything but a lock to get through a first-round encounter with California. But that injury also pulled back the curtain on a freshman worth watching now and absolutely worth knowing in the future. Averaging just 7.3 points on 38.8 percent shooting in 27 minutes per game through her first 22 college games, Logic closed the season averaging 15 points on 46.7 percent shooting in 36 minutes per game in her team's final eight games, all but one which the Hawkeyes played without Printy. A former high school All-American who plays even bigger than a 5-foot-9 frame suggests, Logic also averaged 11.4 rebounds and 6.1 assists per game in that closing stretch, including a triple-double against Michigan. However long Iowa sticks around, Logic is here to stay.

Like I said in Wednesday's Iowa preview - the point guard battle between Logic and Boyd might be the biggest key to the game. ESPN also has a paragraph on Notre Dame post Devereaux Peters, but I won't comment on that at this point for karmic reasons. 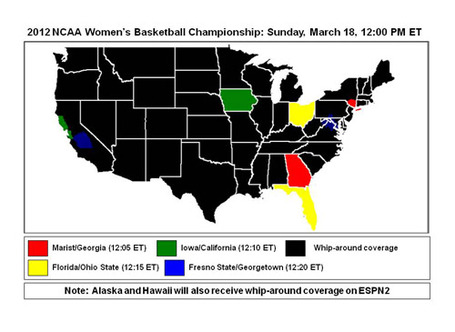 It's . . . a little hard to read, but I'm suitably terrified that Sacramento is considered a 'whip-around' area. ESPN3 does list all women's NCAA games, so at the very least folks should be able to tune in on their computers. Be prepared Sunday morning.