As mentioned in the Willie Fletcher commitment post, the Cal staff was still doing work late in the 2012 recruiting season. Thanks to a pre-existing relationship through new DL Coach Todd Howard, yet another addition to the class had committed and signed a letter of intent before the week was done. Meet defensive tackle Maurice Bennett out of Madison, Mississippi, the newest California Golden Bear! 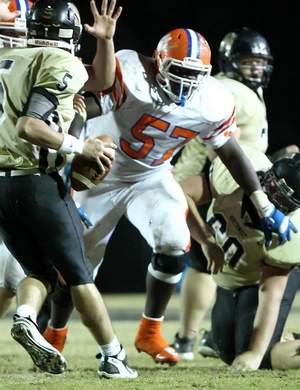 Both Jim McGill of Bear Insider and Ryan Gorcey of Bear Territory have good stories on Bennett's whirlwind recruitment and commitment to Cal. Find links to both stories below:

In a nutshell, Bennett had been recruited to Washington State by Howard and had committed to the Cougars. When new head coach Mike Leach was hired, Howard was let go and Bennett was informed he no longer had a spot in the class. As a result, his recruitment was quiet and he was all set to head to Ole Miss...where had been offered a spot a preferred walk-on. Maurice's older brother Bryon is a starting defensive lineman for the Rebels, so he was well familiar with the program. Then on Wednesday (National Signing Day), Howard called and offered Maurice a scholarship to Cal. The appeal of a full ride and Bennett's high regard of Todd Howard as a coach was too good to pass up. He committed to Cal and faxed in his letter of intent on Thursday.

So what kind of player did Cal get in Maurice? Check out measurables, highlights, and my assessment after the jump. Welcome to Cal, Maurice!

Plenty to like about Maurice when I watch his film. He's a very strong kid, and he's got a nice explosive pop when he makes contact...as indicated by his knocking the offensive guard's helmet off at the 4:23 mark of the highlight vid. His strength makes him a very effective bull-rusher, he literally can just back smaller guys down in the middle of the line. He's also pretty quick, with a good first step that really helps him penetraten and get offensive linemen on their back foot as he engages. He shows a lot of effort too, which is always nice to see from a big dude. He doesn't give up once its clear that the play isn't coming right at him. Rather, he pursues the ball and looks to finish. Nice to see that kind of desire paired with a motor that seems to back it up. He penetrates well when the offense does not elect to double team him, and he seems equally comfortable lining up on the nose or as a DT in a standard 4 man front. Versatility is always a good thing. Strength, quickness, effort, motor. Solid traits in a defensive lineman!

Like Fletcher, Bennett does need some polish, though. His pad level is too high, even if he was able to get away with it at the high school level quite a bit. Its best illustrated when he gets double teamed. Rather than being able to dig in and hold his ground, he tends to get popped up on his toes. This may be the main factor in why he seems to be a better penetrator than a run-stuffer. His strength compensates for raw technique; he needs coaching to help him use his hands more effectively. He also needs to rely more on his lower body than his upper body to hold his space in the trenches, he lets offensive linemen get into his body on occassion. A dude who can squat 500+ pounds should be able to hold his ground against double teams once he gets coached up. The good news is that, like Fletcher again, these are all fixable points. Coach Howard has the technical knowledge to get the most out of Maurice, I'm confident about that.

Courtesy of the calbears.com bio on Maurice, here are some comments from recruiting services on our new DL:

ESPN SAYS
"Bennett comes across as a defensive lineman with a good motor and he is going to hustle around and battle to get the football."

MAXPREPS SAYS
"Not yet a standout but certainly shows the skills to make it in Division I ball. He receives a lot of attention from offensive linemen, is an effective bull rusher who can push the pocket, and shows decent closing speed."

SCOUT SAYS
"A high motor interior lineman, Bennett has good size and a quick first step, but what makes him stand out on the field is his work ethic. He is an every down, play to the whistle interior lineman that fights in the trenches."

Like Fletcher, Bennett is raw. Also like Fletcher, the faults in Bennett's game can be corrected through good coaching. But this guy was not quite the unknown commodity that Willie Fletcher was. Bennett was rated a 3 star DT prospect by three of the four primary recruiting services. To grab a guy like Bennett so late in the recruiting season is a really pleasant surprise. We are pretty deep for now on the defensive line, so there won't be any rush to throw Maurice into the mix. A redshirt year to work on technique will do wonders, and he could be a quality contributor in the coming years. His size and style of play remind me of Aaron Tipoti: slightly undersized for the nose, but a quick and effective penetrator with a good motor. If he is able to give us what Tipoti has thus far, that would be awesome. Nice pickup for us.

Thanks to Coach Howard for steering Maurice our way. Go Bears!