In the final days leading up to National Signing Day last Wednesday, the Cal coaching staff wasn't just working on firming up some of our wavering 2012 commits. In fact, they were digging deep and doing some work. We had some open scholarships and it was time to find some late bloomers. The fruits of their labor? An unheralded cornerback prospect from a SoCal football powerhouse. Meet Willie Fletcher, a 6'3 defensive back from Orange Lutheran in Orange, CA! 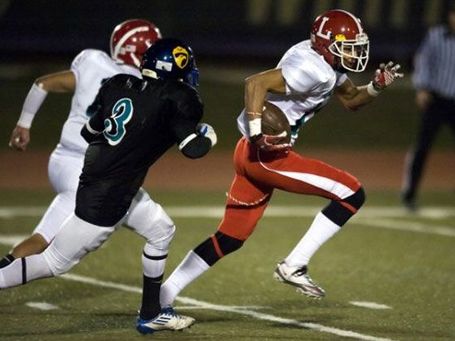 Dan Albano's post from OCVarsity.com has the scoop on Fletcher's late recruitment and commitment to Cal:

Fletcher’s signing ends a whirlwind week for him with the Golden Bears. He first heard from Cal on Monday. The Bears offered him around 3 p.m. on Wednesday – National Signing Day.

Fletcher had two offers on National Signing Day — Northern Colorado and Southwest Oklahoma – but remained patient that a bigger school would offer. On Friday, his patience paid off big-time.

"I feel excited," Fletcher said. "I had contact with (Cal) a couple days before Signing Day. (Coach Jeff Tedford) said they liked my film and that I was a good player and that I had a lot to offer the program. … I told him I wasn’t signing Signing Day because me and my dad (Willie) wanted to pursue bigger scholarships.

Fletcher said it wasn’t hard to be patient.

"Me and my dad had talked about it," he said. "He just told me to be patient and my time will come, and it came. I knew my talents and capabilities and what (college) division I should be in."

Fletcher had a combined three interceptions in two all-star games in January.

After the jump, a link to some highlights of one of the newest Golden Bears and my thoughts on just what Willie could be bringing to the table. Welcome to Cal, Willie!

Allow me to start with what I like when it comes to Willie. First off, he's definitely athletic. He does a fine job hanging with some speedy wideouts, and opens his hips quickly to allow him to turn and run with ease. His size and range is definitely a plus, and I like his physical style of play. He shows aggression both in coverage and in run defense. He's not afraid to make contact, which I really like. He's got very nice size too. In a pass-happy Pac-12 full of big wide receivers, a 6'3 cornerback is a luxury rarely seen. Its also possible that he bulk up and become a safety. Either way, we certainly could use some depth at defensive back. A versatile guy that could potentially be plugged into multiple spots in the secondary is a good thing. The lack of experience aspect is easily skewed as a negative, but it isn't necessarily bad. He's pretty much a clean slate, and he had a pretty good year in a tough Trinity League against some very good competition. He certainly improved as the season progressed, as indicated by strong performances in the two Prep All-Star games he participated in last month. A Trial by Fire, if you will. Coach Ambrose has an opportunity to really coach the kid up, and he could turn into something special for us. While we do have some depth issues in the secondary, there's no reason to hurry Willie's development along. Give him a year plus in a college football and weight training program. If he is able to sufficiently develop, we could have a real player on our hands.

On the flipside, we ARE talking about a guy who has only played on year of organized football. Raw athlete is raw. Just how far behind the learning curve is he, and how quickly will he be able to close that gap? His athleticism obviously compensated for some deficiencies in technique, as well as understanding of the game. But when faced with a precise and savvy route-runner like Bryce Treggs, he got eaten alive to the tune of 150+ yards and 2 TDs. There will be many such wide receivers at the next level. He's aggressive, but needs to spend some time in open-field tackling drills to hammer the technical aspects home. I appreciate his willingness to stick his face in there and make a hit, but a few of those collisions were a bit cringe-worthy. Not in the good way, either. The good news? These are all coachable points. Fundamentals, easily corrected with encouragement and coaching. Its essentially what you would expect from a kid who isn't used to putting on the pads. But today's college football environment operates on the assumption that many of the basic technical aspects of a position are known to these guys before they arrive on campus. Will Willie be able to keep up? Will he be able to pick up on the nuances of being a collegiate defensive back? The competition is stiffer and the stage is bigger.

I think its fair to ask the question...why did no other division 1 schools offer Fletcher? Orange Lutheran is a program that gets plenty of exposure...they have 11 seniors who will play football at the collegiate level next year. How did no other programs outside of Cal, Northern Colorado and Southwest Oklahoma deem Fletcher worthy of a scholarship offer? Was it his lack of experience? Lack of participation on the camp circuit, ala Damariay Drew? Something else entirely? I don't have the answers. I'm genuinely curious. And I'm sure I'm not the only one.

My curiosity primarily stems from the fact that I see a lot to like in Willie's film. I really like this pickup and think he could develop into a solid player for us. They key thing is the "development" part. The big thing to remember is that the athletic base is there with Fletcher, which you can't really coach up. Obviously the coaches saw a guy they liked and that they felt they could mold into a quality division 1 football player. I can dig that. It will take some coaching and some time. You can teach technique. You can teach tackling fundamentals. You can't teach height. You can't teach aggression. Or athleticism.

The thing I love about a guy like Fletcher is that you have a good sense of their floor, but not their ceiling. At the least, we have an athletic addition to the secondary who will provide needed size, depth and versatility down the line. At the most...who really knows? That's the fun part. Maybe we just got a giant cornerback who can lock up a 6'5 wideout in the coming years? Hope springs eternal around these parts.

Worth a flyer? Hell yes he is. Go Bears!