I, myself, was super excited to see this baseball event! After grabbing food at Cancun, I headed up to Evans Diamond, following the most advanced marketing practices the 19th century has to offer, to see whether Cal could sweep the Tigers from the east. 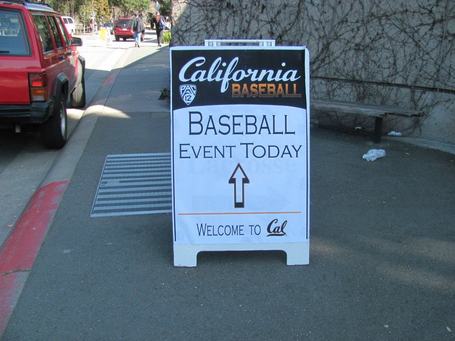 It was one of the biggest crowds I'd ever seen at a Cal baseball game. I do not know if it was the amazing February weather (thanks, Global Warming!) or the fact that Cal fans are happy to see any baseball (as the Giants and the A's will not start play for another month or so). But it was actually fairly packed.

This is Cal baseball's opportunity! The near death experience from last year coupled with the College World Series run has catapulted the baseball team's mere existence into the Berkland zeitgeist. This is not something we could have said previously, sadly. Now is their chance to really pump up the marketing and try to get more and more and still yet more fans out to Evans Diamond for what is easily the best bang for your buck baseball experience in the Bay.

For only $10, you can sit mere feet away from the diamond and watch the stars of tomorrow play today!

I could tell that they had put some effort into enhancing the gameday experience. There was a lot more music playing. Lots of music between innings. Whenever anybody hit a foul that went out of the stadium (not too hard to do), they would play either a sound effect of glass breaking or a car alarm going off. Although they often played the sound well too early as the ball was still flying through the air. I figure they need a team of people stationed all around the park calling in a triangulation of the location of the ball to ensure that the sound effect is played at the most perfect moment and not a moment too soon!

Cal actually jumped out to a quick 1-0 lead in the first. Tony Renda singled, stole second AND third, and was knocked in on a ground out. SMALL BALL! 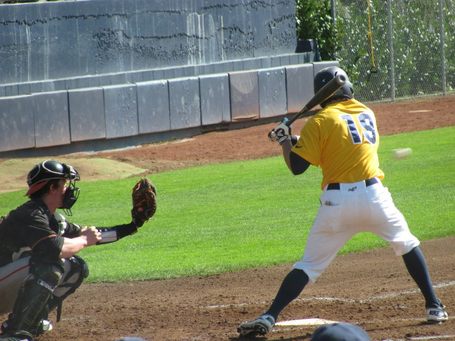 The starter for the Bears was Michael Theofanopoulos. Sounds Greek. He pitched OK going 5 innings, but only giving up 1 earned run. 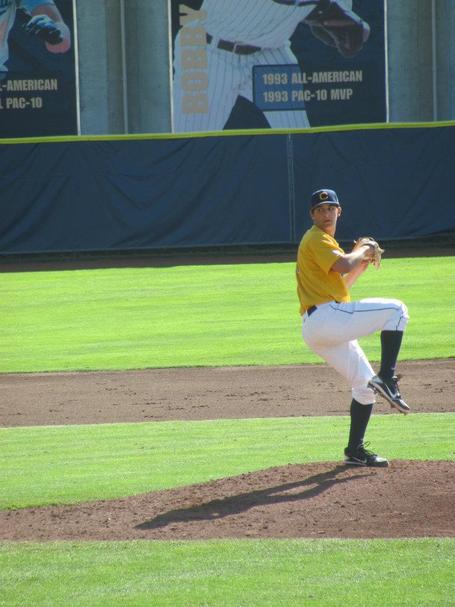 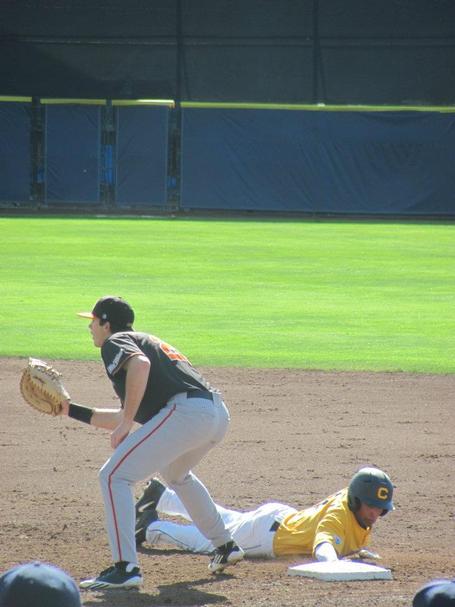 Evans is surrounded by Haas Pavilion, Edwards Stadium, and some sort of heating place. The heating place smelled as if there was a gas leak and then steam came rushing out. Should we be concerned about an explosion? 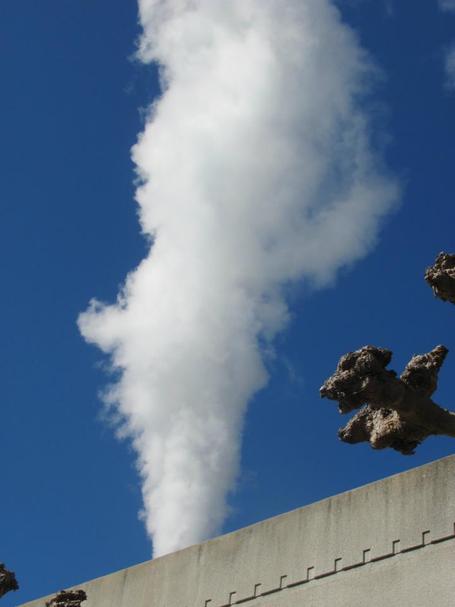 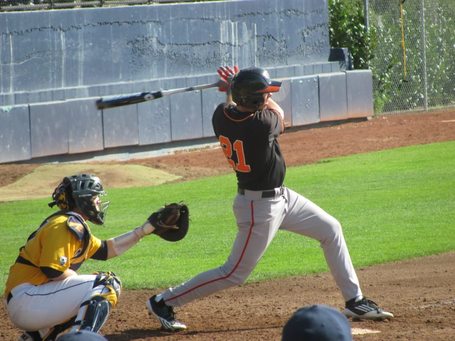 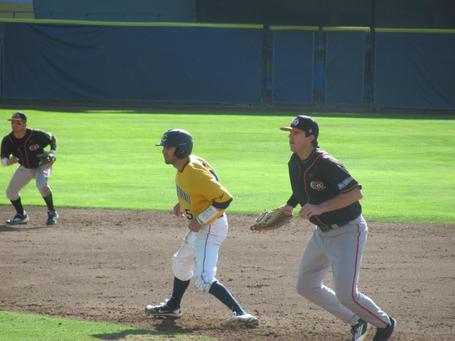 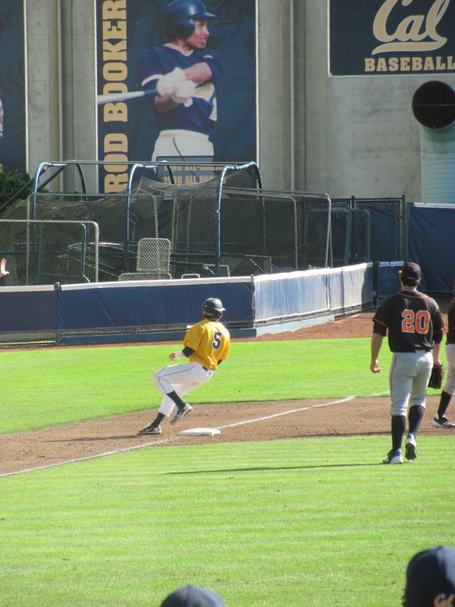 Cal got a runner on 1st and 2nd. They moved to 2nd and 3rd on an throwing error by the pitcher. This caused Pacific to intentionally walk Tony Renda to load the bases. A sac fly and then a single by Chadd Krist drove in those 2 runs. Cal took the lead and looked to win 3-2! 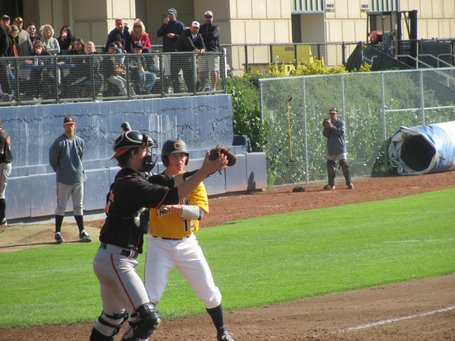 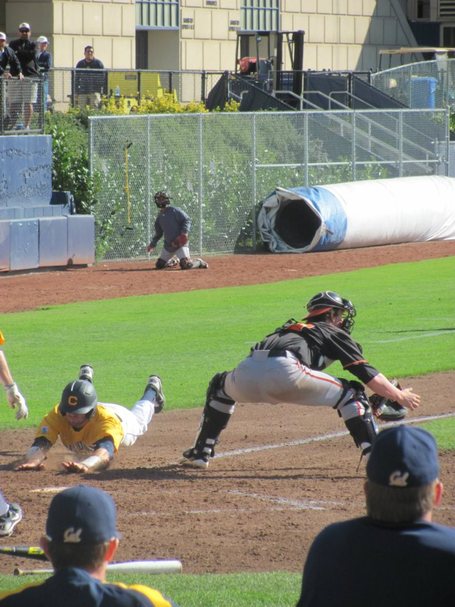 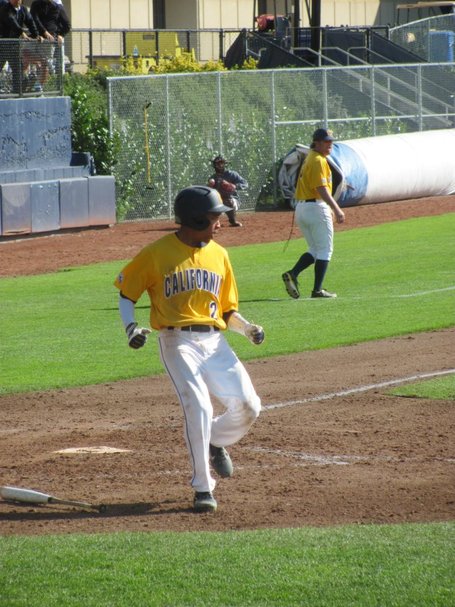 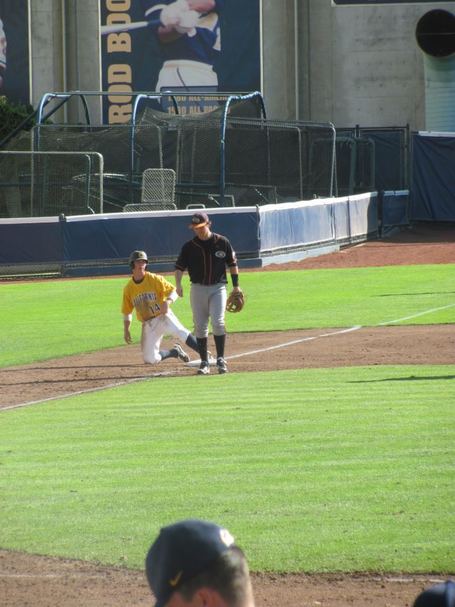 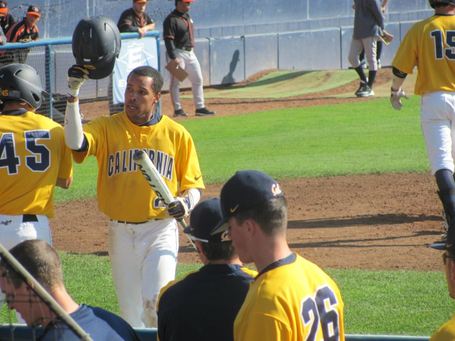 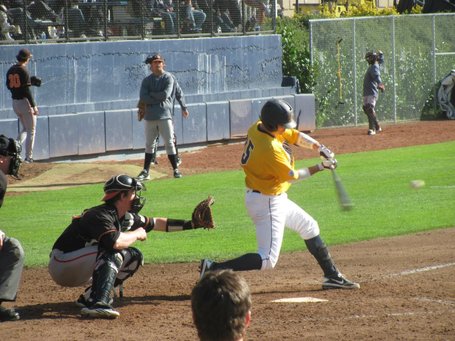 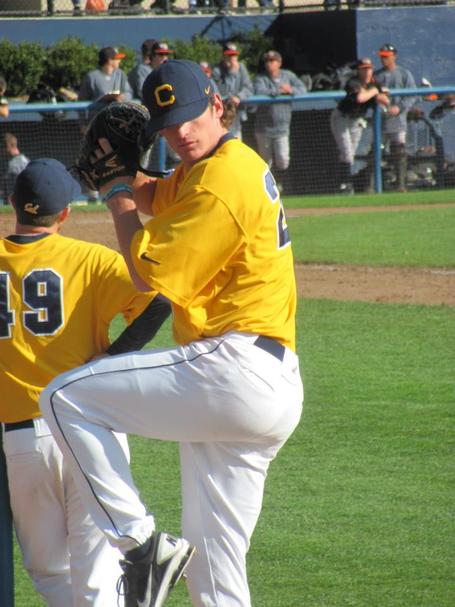 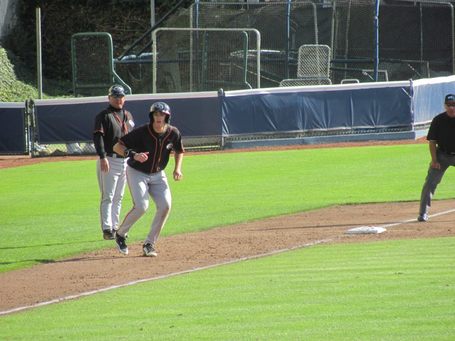 But Cal needed no time to move ahead. Football Center Mark Brazinski showed up with many similarly beefy friends to the game in the 8th inning and were heckling the Pacific pitcher. It was a fun and energetic scene at Evans Diamond.

Some huge hits in the 8th, including a triple by Darrel Matthews and a big double by Chadd Kristt. Cal ended up scoring 6 runs in that inning! 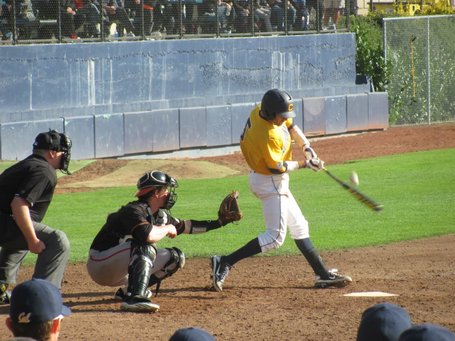 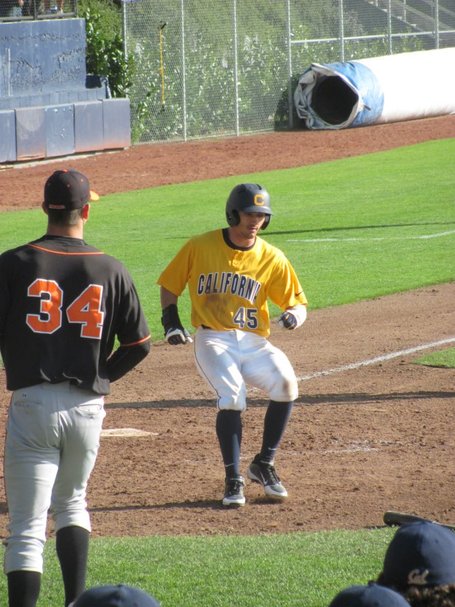 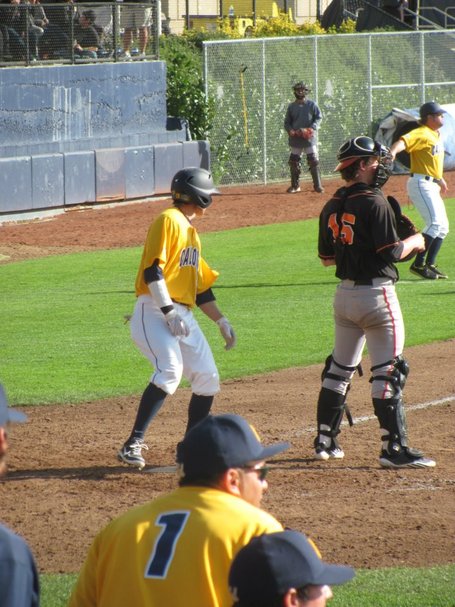 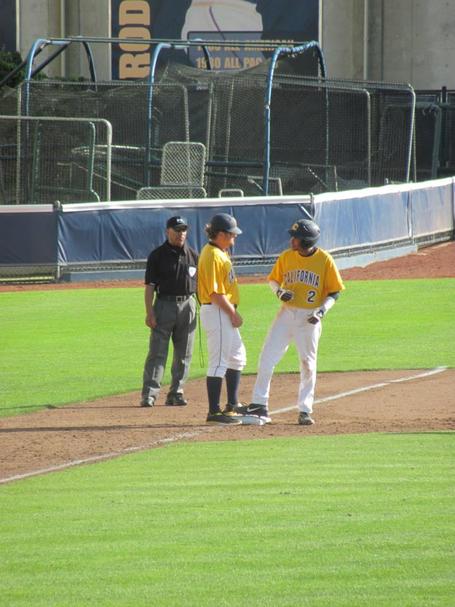 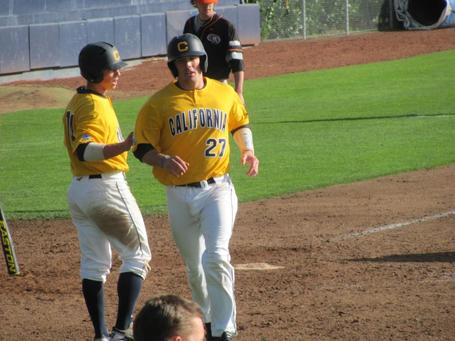 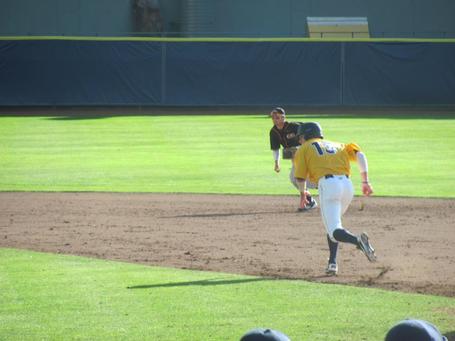 And here is the final out! 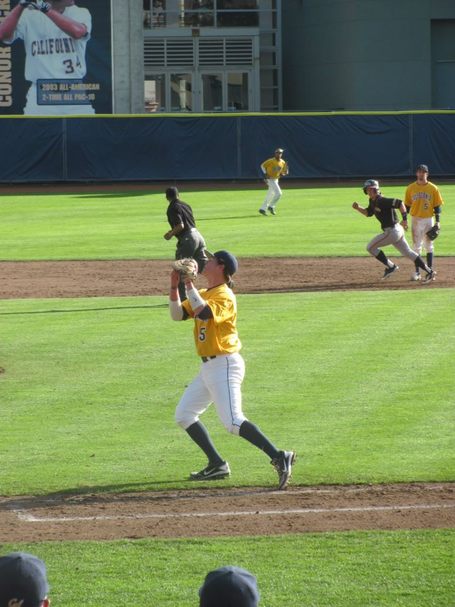 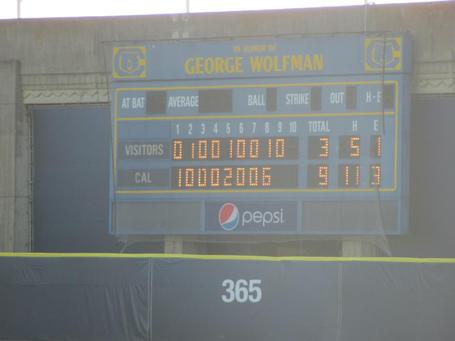 All that is left is the sportsmanship! 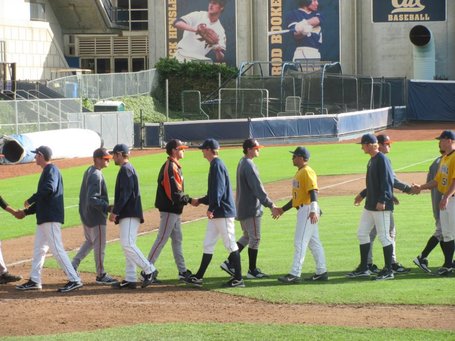 Try to come out to some games. The next weekend homestand is against Lehigh (a small school out of Pennsylvania). There is a saturday game AND a double header on Sunday. Also, at Haas that evening WBB takes on Stanford. So, you could go to the Sunday double header and then walk over to Haas for the WBB game. Quite a day that would be. GO BEARS!