What are your thoughts on the Sonny Dykes hiring?

Whatcha think and if you were to give it a grade, what would it be?

Share All sharing options for: What are your thoughts on the Sonny Dykes hiring?

Ohio Bear: Cautiously optimistic. It is not a home run, but I don't think it's a bad hire either -- certainly not as terrible as the nayest of naysayers would have us believe. I give it a B+. Subject to adjustment based on how we play next year.

It's not the big name we all were hoping for and thought we deserved. So I think a lot of people are going to feel skeptically about him, and so do I. But looking at this resume, this guy is a pretty good coach who could be a really savy hire. He is a protege of Mike Leach, and is definitely one of the offensive guru's of college football. My only worry is that he'll try to turn Cal into an air raid attack, which I don't want to see with our long tradition of great running backs. Other than that, I'm excited to see what he'll be able to do with the likes of Kline and company. Get him a good DC, keep gould, and this could be a money coaching staff.

LeonPowe: Hiring a coach is such a crapshoot - sometimes a guy is the right guy for that time and place. Sometimes they aren't. Not really some eastern philosophy but look at the track record. Who thought Jim Mora was a good hire at UCLA? People may have been intrigued by Harbaugh at Stanford but no one knew he'd be this good. Pete Carroll at USC? I bet people were pissed about hiring an NFL washout.
On the other hand look how giddy people were to bring back Bill Walsh to Stanford or John Robinson to USC - hell we thought we had a coup hiring Keith Gilbertson and Steve Maruicci. Their resumes at that point were great - offensive coordinator at the national champions? Sure! Offensive coordinator and QB coach for the best Cal team since the national championship teams? Absolutely!

This is why I haven't been that active in the coaching search discussion because no one knows anything. And those that say they do are lying.

Berkelium97: I am underwhelmed. Petersen and Diaco appear to have turned us down. But why Dykes ahead of MacIntyre? MacIntyre put together a solid team on both sides of the ball and in the classroom. Dykes has a great offense that should make us quickly forget about the sloppy Cal offense from the last five seasons, but his teams have been inconsistent on defense and penalty-prone. On top of that, there's not much out there about how much focus he places on academics. Dykes could be a great coach, but I felt he had the most question marks of all our candidates.

He must have had a tremendous interview.

Unclesam22: I'm a little with LP on this one. No one had any clue when Tedford was hired that he'd end up as the all-time leader in wins. After seeing big names come off the board yesterday and not getting Peterson, I can definitely see why people are disappointed. I really hope that Gould stays and that the RB position doesn't become an after-thought, and I really, really hope that Dykes brings in a solid DC. Clearly LA Tech didn't get it done on that side of the ball last season. So those, and the worries about academics are my pessimistic thoughts.

But as for the offense, man oh man. If Kline is as advertised and our WR's continue to play as well as they did this season, our offense could be scary good. I think Dykes will probably come in with something to prove and I don't know that that's a bad thing. So let's see how next season goes and then I think we'll all have a better idea of where the program is headed.

As for a grade, I guess I'd give it B-. Not terrible, but just above average. Plenty of room for improvement though, so we'll see.

NorCalNick: I'm excited. Cal hasn't had an excellent offense since Nate Longshore hurt his ankle in Eugene, and there is zero reason to think that Dykes can't improve things in a hurry. There are concerns about his resume, but I'm hoping that those concerns will be addressed by who Cal brings in to fill the rest of the staff.
Mostly, it's hard for me not to be optimistic, because if I'm not optimistic then I stop being a fan. I think that Cal has the talent on defense to at least be average unless they hire a complete numbskull as defensive coordinator. And if you combine an average defense with an above average offense, you should have a team that, at the very least, is meaningfully better than last year's team.

TwistNHook: This photoshop actually makes me like him better: 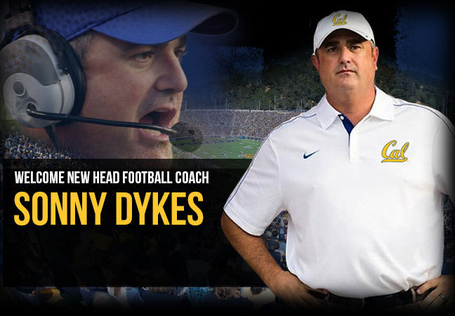 I think its because I like things that look like Cal. So, seeing him in the Cal stuff I'm all "HOW BAD COULD THIS GUY BE?? HES WEARING CAL GEAR!!"

We also got some thoughts from a LaTech professor. Read below:

PBCrook: Thought I'd add in a few thoughts to your conversation, in no particular order...

-Y'all got a good coach. I've watched Sonny come in and take a pretty decent foundation left by Dooley and build on it, and I can see him doing something similar at Cal.

-He's an excellent offensive coach and has a great way with players. They respect him, play hard for him, go to class, and stay out of trouble away from the field (there's a lot to be said for that these days).

-Hope like hell he hires a good DC, because he won't have much to do with that side of the ball.

-What he's been able to accomplish here, with the financial limitations he faced, has been pretty astounding. I can't even begin to explain the lack of resources this place has. Not only that, he was faced with a staggering amount of apathy from the fanbase. Case in point: with the team at 9-1, and Orange Bowl reps in attendance, playing what was essentially a conference championship game, every business in town was GIVING away tickets in order to get a respectable crowd. The stadium was still only 2/3 full (and the stadium only holds about 32k.

-The missed bowl opportunity lies squarely at the feet of the AD, who arrogantly made his decisions without consulting the coach.

-The university didn't make a counter-offer to keep him because there's no money to do so. We are about to face our 6th consecutive year of mid-year budget cuts. As an example of how difficult it is to raise money here: Two years ago, the university announced a capital campaign to build a new football complex behind one of the endzones, to include some luxury boxes. The goal was to have the money raised...in TEN years!

-Tech fan hate to see him go, though we knew it would happen eventually. Seriously, what coach would want to stay after that bowl fiasco? Good luck to him and to y'all.

Kodiak: I was initially leaning towards a C+, but I guess I'll give it a B- based on three things:
1) The dude knows how to put together a Pac-12-worthy offense.
2) Sandy Barbour has a very good track record with hiring coaches.
3) ManBearCal likes the hire. And he's legit.

I'm less concerned about the poor defenses on Coach Dykes' resume than the penalty yardage. Excessive penalties raises my concerns with regards to team discipline. Besides on the field, how does a lack of discipline translate to off the field behavior and academics? Maybe it doesn't.
The positive reports say that he's a great recruiter, is highly personable, and comes across as a genuine family man. I could see him engaging well with the students and alumni. Obviously he'll have to chose wisely with regards to his coordinators and position coaches.
But honestly, who knows? As has been said before, projecting how this goes is no more accurate than reading tea leaves. Anyone who says otherwise wants to sell you something. Either way, I'm excited to see how spring ball shakes out. In Kline we trust?

Atomsareenough: Looking around on Twitter, I don't know if people are honestly excited, relieved to have this over, or trying to be optimistic and rally around the program.... But I'm not going to mince words here. I'm NOT happy with this pick. In fact, I gotta say, I'm pretty disappointed. Obviously we didn't get Chris Petersen, not that that was ever remotely likely to happen. Same with Charlie Strong. Petersen and Strong aside though, Dykes was NOWHERE near the top of my list. Frankly, I really wanted Bob Diaco. Like really, a lot. But still, I would also have been happy a guy like Greg Roman or Kirby Smart.

Failing one of the top coordinators, if we wanted a lower conference head coach, there were other names I would have definitely preferred before Dykes, like Dave Doeren or Mike MacIntyre, and probably even Darrell Hazell. If we had hired any of those guys, I wouldn't have been thrilled, but I would have been satisfied.
So, Dykes was like a Plan G or Plan H kind of fallback, as far as I'm concerned. And it even LOOKS like a fallback option, the way this played out. We interviewed him last week, and pretty much ever since then, based on the chatter from his wife, his father, and his idiot AD, who were all blabbing to the media the whole time (which was rather unseemly, I gotta say), he was ready and waiting by the phone to come to Cal. So then why didn't we hire him days ago, unless all our better options didn't pan out? If he's such a hot candidate, why was no other school interviewing him that we know of?

Anyway, offense, touchdowns, blah blah blah. It'll probably be okay, but I'm literally the opposite of excited. I like smashmouth football and defense and I hate penalties. I'm just annoyed right now I guess, so I'll give Dykes a chance, and obviously I hope I'm wrong and it works out well, but as for right now this leaves a pretty crappy taste in my mouth. My opinion of Sandy is tentatively revised downward, pending the next season. It's probably going to take 9 wins (or 8 wins plus a bowl win) next year to make me feel like I was wrong.
I give it a C-/D+