What did you think about the WR/TE situation in 2012?

Keenan Allen. Richard Rodgers. Chris Harper. Bryce Treggs. And many, many more. What were your thoughts on the Cal WRs and TEs in 2012?

Share All sharing options for: What did you think about the WR/TE situation in 2012?

JahvidKnowsBest: On paper, that's a great group of receivers. However, characteristic of our program of late, we found it difficult to get these guys the ball. Keenan Allen was the best receiver in college football last year. Yeah, he wasn't as dominant as he was in 2011, some of that's on him, a lot of that is on the fact that we just weren't a very good team last year. Chris Harper, I think he's solid. I'm not totally sold on him like a lot of people are. He's small, quick, but he's definitely not Desean Jackson. I think a big reason he was so successful last year was because Keenan was taking up a lot of the safety help. Going into next year, he'll be viewed as our no. 1 guy and I'm interested in seeing how Dykes will get him the ball in the Bear Raid. Treggs, man he was disappointing I thought. After a big game against Nevada, he all but disappeared the rest of the season. Hopefully he'll turn it around next year; I think he does have big potential. Rodgers I think may be the best weapon of the bunch. He's an animal. Gronkowski-esque. I really hope Dykes is able to fully utilize him next season. If he becomes a big time threat in the middle, it will make life a lot easier for the other receivers on the outside.

Ohio Bear: I was encouraged by the WR play this season. Keenan Allen was Keenan Allen, and it was unfortunate that he could not finish the season due to injury. Sure, we may have lost the last three games of the season regardless, but it would have been nice to play those games with our biggest offensive threat.

I was a little worried going into the year with a true freshman on the opposite side of Allen. But if you told me before the season that we'd find a breakout freshman star, I would've guessed it was Bryce Treggs. But as it turned out, we have a gem in Chris Harper. Not that Treggs isn't a good one -- I saw enough to show me that he is, and it's unfortunate that he too succumbed to injury. But it was clear to me that Harper is a quality player. Runs good routes, good hands, dependable. Other than Allen, he seemed to become Maynard's go-to guy.

I'm intrigued with Darius Powe. In the action he got, I was impressed.

Rodgers -- wow. I feel like we wasted him this season. There's so much potential there as a receiving threat that we didn't tap. In the new Sonny Dykes/Tony Franklin offense, I'm curious as to how Rodgers will be utilized. Is it too much for me to ask for a Gronk-like transformation? 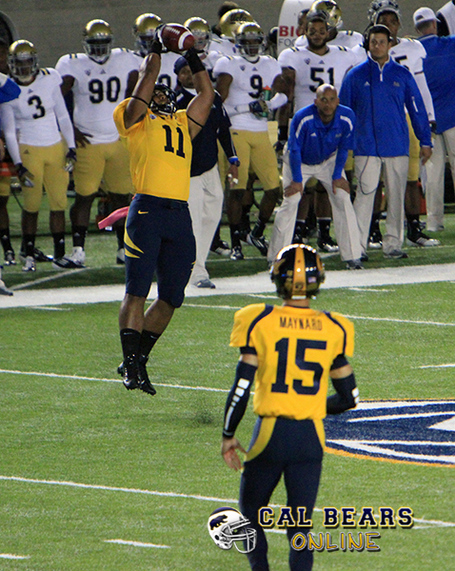 Berkelium97: I am disappointed by how we underutilized our tight ends this season. Tedford specifically visited Belichick and the Patriots to learn how to get the tight ends more involved with the offense. What did we get? 5 more total yards from our TEs, but 14 fewer receptions and 4 fewer TDs. We had injury issues with our TEs this year, but we had that same excuse last year too. Considering Tedford repeatedly said Rodgers could be the best TE in the nation, it is mystifying why we didn't get the ball in his hands more often. I would not be surprised if Dykes and Franklin, whose offense rarely even uses the tight end, are able to get more production out of Rodgers next season.

I liked what I saw from the young receivers. Chris Harper proved to be a reliable receiver and was solid about hauling in misplaced passes. He had some fumbling issues early in the season, but he has plenty of potential. Treggs was great in his first game but seemed to disappear after that. He should get plenty of looks in the Bear Raid defense. Darius Powe also had some impressive moments. I'm looking forward to what the Cal offense can do next year with all these promising receiving targets.

Vincent S: Like everyone else, I was nervous about how this year would turn out. My guesses (in terms of re would have been:
1. Keenan Allen
2. Keenan Allen
3. Keenan Allen
4. Maurice Harris
5. Bryce Treggs

We all know how that turned out. What was much more interesting to me was not WR and TE receiving, but WR and TE blocking. To me, many receivers and get open and catch; not many can block effectively enough to spring open the running game at the second level.

In the blocking department, I was highly impressed with the freshmen. During every long Isi, CJ, or Bigelow run, I saw our receivers sustaining and holding blocks without holding, creating the holes our RBs used for long runs. This is the main reason why I'm apprehensive about Wes Chandler leaving; I hope our receivers coaches in the future are equally adept at teaching a valuable skill to our receivers and tight ends.

NorCalNick: For the nth year in a row, the true talent level of Cal's recievers is difficult to seperate from the performance of the units they depend upon to get the ball. It feels like the days of Jackson, Hawkins and Jordan, when guys got the ball in positions to make plays, was a long time ago.

I have a lot of confidence in the ability of our receivers to get open and hold onto the ball, to the point where it's the unit I'm least concerned with on offense. Honestly, Chris Harper's production as a freshman wasn't far removed from what Keenan Allen did in his first year in Berkeley. Add in some exciting flashes from Treggs, Powe and Rogers and you can't help but think that they only need a QB that can get them the ball and a line that can give them enough time to come open.

Will Cal have that next year? I have no clue. But we know the Dykes offense can put up video game numbers, and at the very least I think he has the pass catchers to do it. 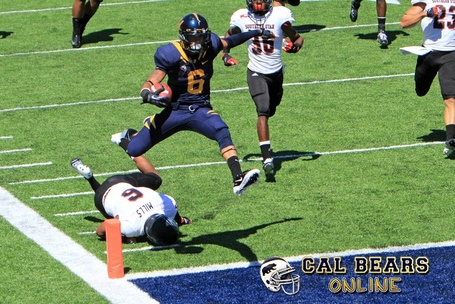 Unclesam22: Echoing everyone else here, I was a little disappointed by Keenan Allen's performance, surprised by Chris Harper's, and frustrated with Richard Rodgers.

For whatever reason, even though he ended up having a decent season and torched WSU, KA21 totally underwhelmed me. I'm not sure if it was his lack of sure footing in the first few games or the fact that we kept losing games or what, but I just wasn't that impressed with him this season. Even so, he still had a solid season, leading the team with 737 yards and 6 TD's. Not playing the last 3 games of the season hurt those totals, but is that really what you're looking for out of your probable first round draft pick? Not likely.

On the other side, Harper was a complete revelation. He showed speed, hands, explosiveness and grit, all of which allowed him to come up with 544 yards and 2 TD's, good enough for second on the team. As others have noted, Treggs showed some flashes of greatness in the first game but never really fulfilled that promise. Here's hoping the new system and consistent QB play will help him reach his full potential.

And then there's Rodgers. He was slowed by injuries, but his use on the field was puzzling at best. He ended the season with only 288 yards and 1 TD and never really dominated any game besides UCLA (which we coincidentally won). Again, as everyone else has said, I'm very interested to see how he fares in the new system.

Given the challenges that this group faced this year (inconsistent QB play and a terrible O-line) I still felt like they played pretty well and I definitely think the foundation is set for a great year from this unit next season.