Enter Wisconsin: A Q & A with Bucky's 5th Quarter

California's team heads into Dead week and Finals week with a spotless record, having won the DirecTV Classic in Anaheim. Now, the true tests begin - Wisconsin, UNLV, and Creighton. The next three games will go a long way towards determining how Cal fans ultimately feel about their system. On the other side, Wisconsin's football team heads into this weekend playing in the Big Ten Championship game for a berth in the Rose Bowl. The men's basketball team plays Cal tomorrow in the first game of a home-and-home - Wisconsin visits Cal next year (tentatively). We sat down with Phil Mitten of Bucky's 5th Quarter, SB Nation Wisconsin blog, to better get to know the Badgers. Thanks to Phil for his candid responses; as always, Go Bears!

Share All sharing options for: Enter Wisconsin: A Q & A with Bucky's 5th Quarter

1. Tell us about your season so far - you've beaten teams you should have, and had tough losses at Florida, against Creighton and recently in the Big Ten/ACC challenge to Virginia. Is this to expectations, below or above?

Definitely below expectations. Florida was kind of expected, Creighton was understandable ... losing at home to Virginia was unacceptable. Everyone is finally accepting how difficult a process it is to replace UW's entire backcourt with two guys possessing virtually no prior experience. Wisconsin hadn't lost three games in November since 2001, putting some fans on "bubble watch" way too early.

2. From the stats it looks like your team is pretty balanced with four players averaging in double figures but nobody playing over 30 min/game. Can you describe for our readers your style and who is the leader for Wisconsin?

Great question because right now there is no leader. That's the problem. Ryan graduated point guard Jordan Taylor, lost his replacement (Josh Gasser) to a torn ACL before the season, and has now switched his starter from redshirt freshman George Marshall to the sturdier, more confident sophomore Traevon Jackson. It's a work in progress. Senior F/C Jared Berggren is the best player, and he anchors an all-senior frontline with forwards Ryan Evans and Mike Bruesewitz. Evans in particular has started slowly, but he and junior Ben Brust probably will hoist the most shots. Besides Evans, everybody on the floor is a 3-point threat at all times, but there isn't much dribble penetration. The patient offense, combined with traditionally solid defense keeps Wisconsin's tempo infamously low.

3. Who is a player that we should know about, but currently don't?

Maybe Sam Dekker is still flying under the radar? Virginia certainly put the clamps on the freshman, but he might be the most talented player on UW's roster. He's not a great rebounder at 6-foot-7, but Dekker has good guard skills and can get a shot whenever he likes. It has been an adjustment for him coming off the bench and deferring to the seniors around him I think. To tell you the truth, Dekker seems like the most likely guy to take over a leadership role because he's used to it coming in as such a decorated high school player.

4. What are the offensive and defensive philosophies of Coach Ryan?

Offensively, Ryan lives by a "protect the ball at all costs" mantra. By limiting turnovers, Wisconsin has produced some of the most efficient offenses in the country during Ryan's tenure (including the No. 2 offense two years ago). You won't see as much "inverted" sets with guards posting up as you would have a decade ago, but Ryan's Swing offense is a 4-out, 1-in motion offense featuring flex screens, up screens and UCLA cuts to the hoop.

On defense, Ryan lives and dies by his man-to-man defense. The Badgers start early by eschewing offensive boards in favor of getting back to stop transition points. From that point on, opponents are working hard to find a quality shot. Ryan teaches guys to use their legs to body up on defense and doesn't like to extend pressure or foul. For the past couple seasons, we've seen a lot of switching on screens, which can be exploited for mismatches. But certainly, Wisconsin prides itself on defense, even if it wasn't evident against Florida. Berggren leads the Big Ten in blocked shots, while Evans has always been a versatile and effective defender. 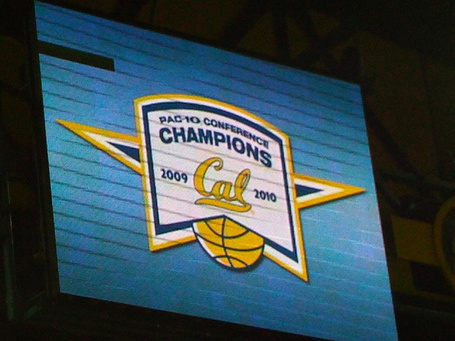 The 2009-2010 California Golden Bears won the conference for the first time in 50 years. Undefeated in conference play thus far, this year's Cal team is on track to win another championship.

5. Wisconsin/Camp Randall has a great reputation as a football stadium, but what are games at the Kohl Center like? Good student section? Loud alums? We will have a few Cal fans in attendance - what should they know?

Oooh, thanks for the soapbox. Honestly, the crowds have been somewhat lackluster during the non-conference portion the last few years. Very disappointing to see so many empty seats unfilled for a Big Ten/ACC Challenge game. The older crowd faction seems content to stand up and get loud only 2-3 times per game, which bothers the young folk. The student section is located behind one basket, stands the whole game and will make the majority of the noise.

The Kohl Center can still rise to the occasion for a big game, but it doesn't feel as impenetrable as it once did. A 143-game sellout streak was snapped last December, so the building has seen its share of huge moments. But maybe it's no coincidence that the Badgers have gone 13-5 (72%) at home since then, after starting 156-11 (93%) under Ryan.

FYI, I tried the Qdoba burrito line at halftime the other day and it was surprisingly satisfying.

6. For those of us living not-in-the-Midwest, what is frozen custard?

Frozen custard is basically ice cream on steroids. Eggs + cream + sugar. Oh, yes, it is very smooth and delicious. Around Madison, try Michael's or Culver's. And then take an extra lap ...

7. What does Cal have to do to win this game?

If the Bears control the boards, they have a great chance. That was Virginia's formula Tuesday, using active, athletic forwards to gain a 36-18 rebounding edge. Due to Wisconsin's inexperience and lack of size in the backcourt, there is also an opportunity for Justin Cobbs to take over. If he can control the pace the game is played at and breakdown the Badger defense, that could get the Wisconsin's big men into foul trouble on help rotations.

8. What does UW have to do to win this game?

See above. So far, winning the rebounding battle has perfectly predicted Wisconsin's success. The Badgers have to get better at it, starting with Jared Berggren. Berggren must win the matchup in the paint, or by drawing his defender out side and knocking down jumpers. He's been a little lax on the glass, but the talent is there. Someone in the backcourt then needs to get him the ball. Jackson is a little better at creating offense for his teammates, but both he and Brust have trouble finishing inside most of the time. Really, the game should come down to outside shooting, assuming the rebounds are fairly equal. Wisconsin just cannot afford another 4-for-12 type night from Berggren, Brust or Evans.

9. Who do you want to punch in the face?