Cal really hurt itself in this game. If it could have just made more of its open, close range shots this woulda been a totally different story.

Headed out to the Cal-Creighton game on Saturday night. It was a very Berkeley experience. As we were walking across Lower Sproul:

a) I saw that ZBach had The Hard Nut, a dance performance of some sort.

b) Some rando guy was screaming at the crowd about how amazing it must be to an attractive woman. You get everything you could ever want in life or so he theorized. We yelled a few things back, but he never responded to us. Sads!

c)We saw this protest. I spoke with the protesters and they are protesting some Pac-12 employees. You can learn more information here. It is a bit beyond my pay grade. I asked if we were crossing a picket line. The guy said since we weren't working the game, we were not. I told him I was planning on doing absolutely, positively no work at all! I welcomed the opportunity to be lazy. And Lazy I Was! 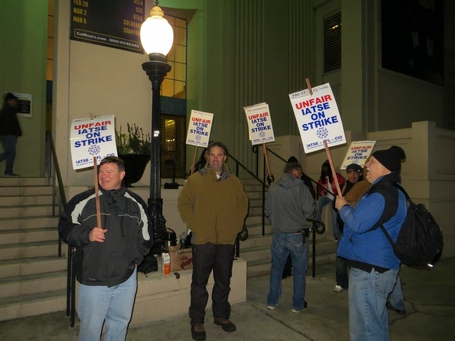 Cal got off to a slow start (also a slow middle and a slow end). I think at one point it was 8-0 Blue Jays. 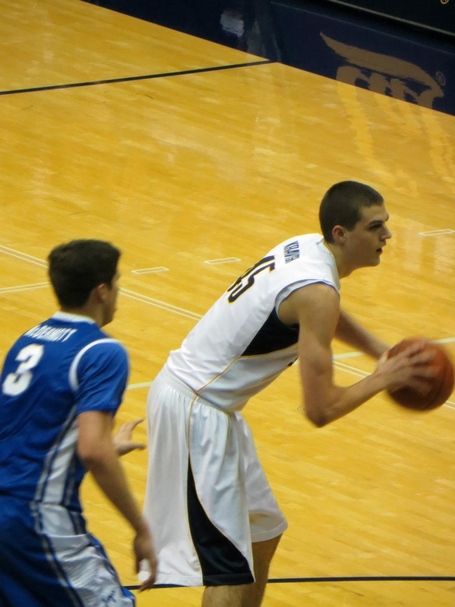 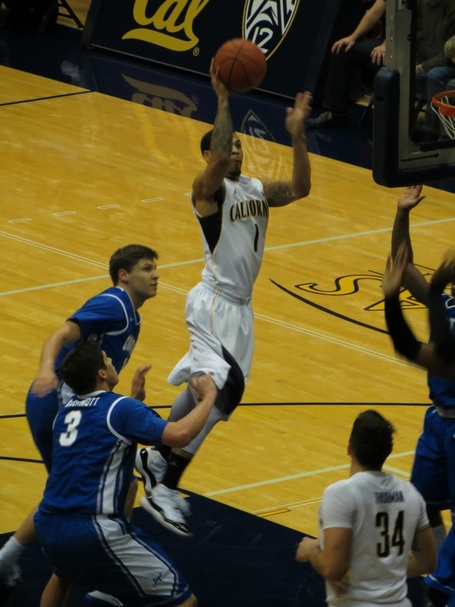 These photos show shots from close in range, just a few feet away. Cal missed many, many, MANY opportunities like this from close range. Really easy shots to make. If Cal had just made these easy shots all game long, it would have been a really different story. But they couldn't. It wasn't even necessarily Creighton D (although in some cases, it was). Cal just couldn't finish. 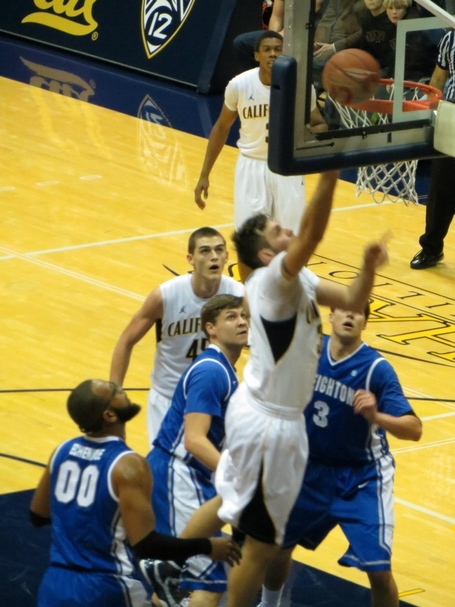 How rude of Tyrone Wallace to put his arm in front of his face right as he goes up for this shot. Doesn't he have any respect for people sitting in my exact seats potentially taking photos??? Kids, these days! Back in my day, I sucked at basketball and couldn't have accomplished the below athletic feat with a trampoline or a crane that would carry me into position and hold me there. 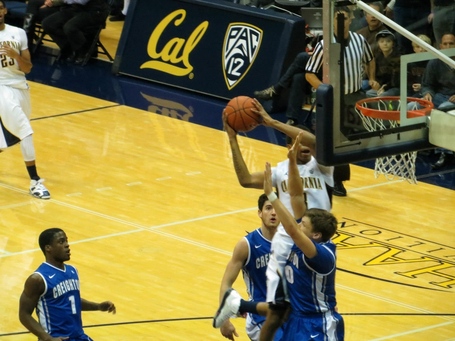 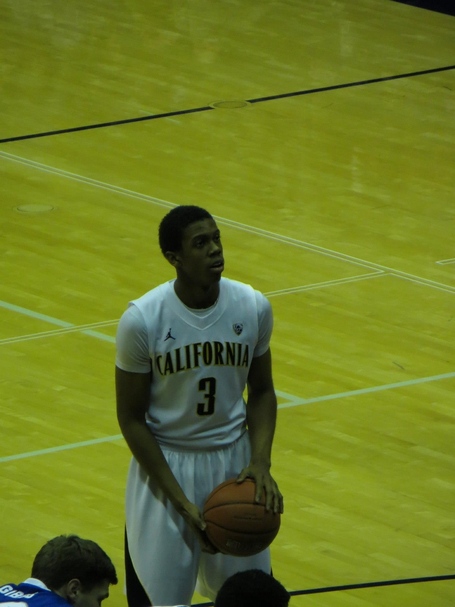 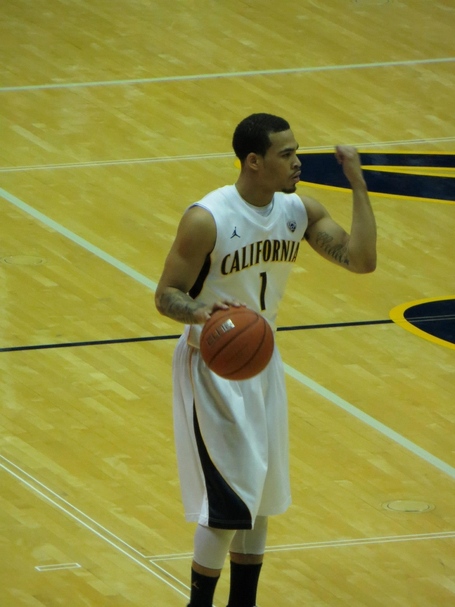 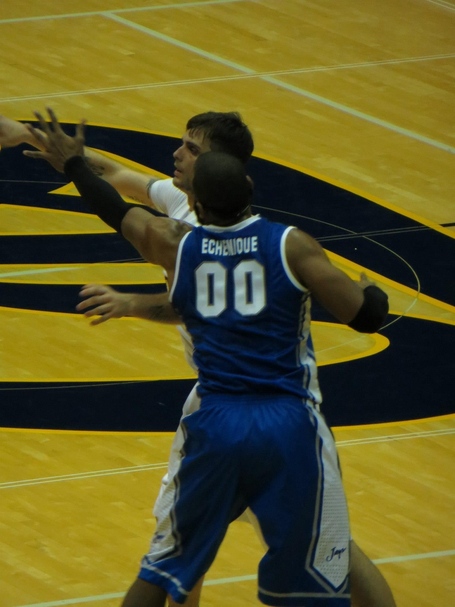 I thought the answer was Lampley, but apparently, it is Randle. I suck at trivia! More on Randle later. 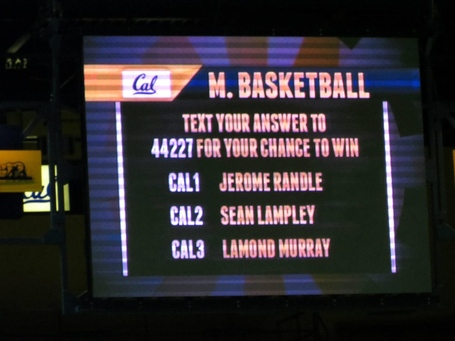 Ricky Kreklow came into the came for the first time in several games. He brought a good burst of energy and basketballing skillsosity. And we have now exhausted my knowledge of basketball analysis and terms! 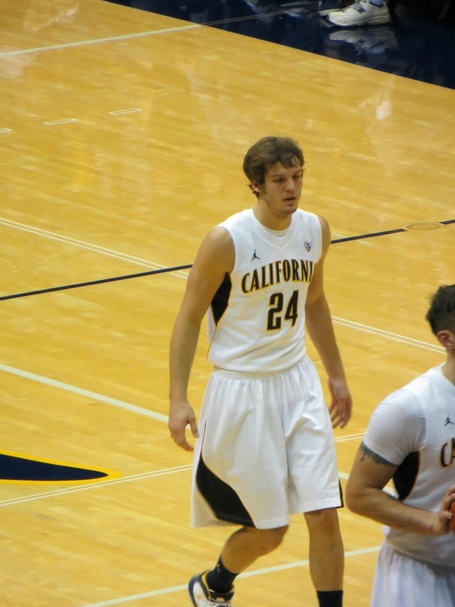 Monty spent large chunks of the game in this position. He had a lot to complain about when it came to to the officiating. 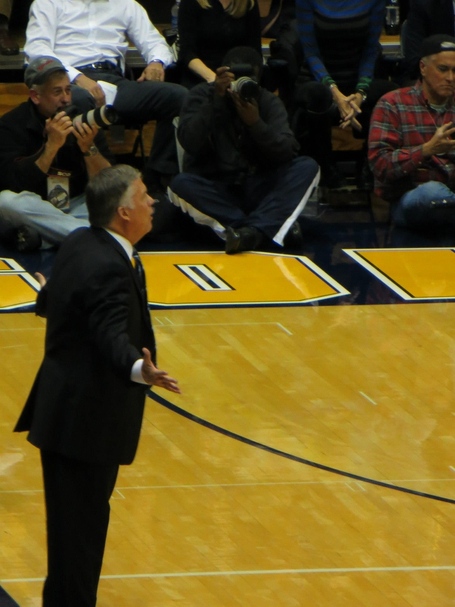 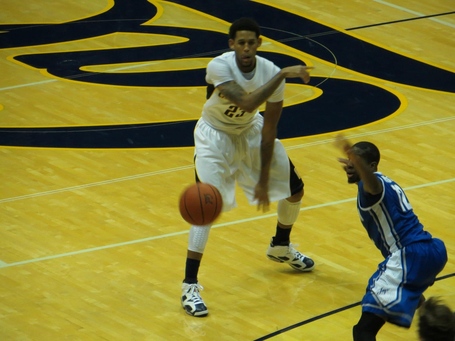 This was a promotion where the guy had to hit a bunch of shots (spelling Toyota) to win like an iPad Mini or something. He missed like his first 10 shots in a row and everybody in the crowd starting booing him quite heavily. I felt terrible for the guy! But then he actually made a bunch of shots, won the prize, and the fans were cheering him wildly. I'm just surprised they'd boo some rando guy in the crowd. 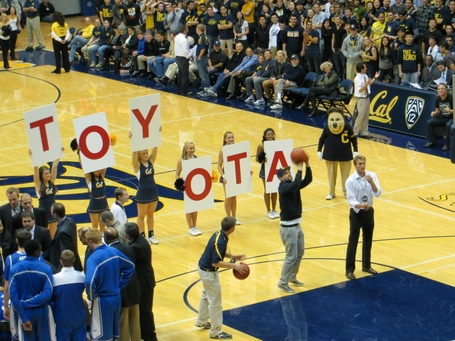 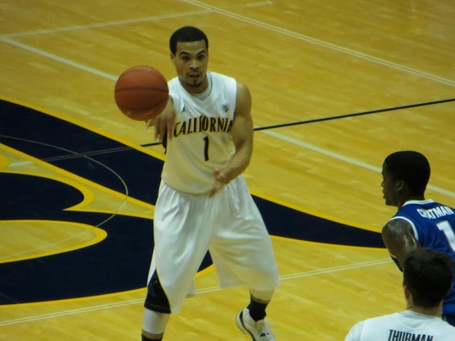 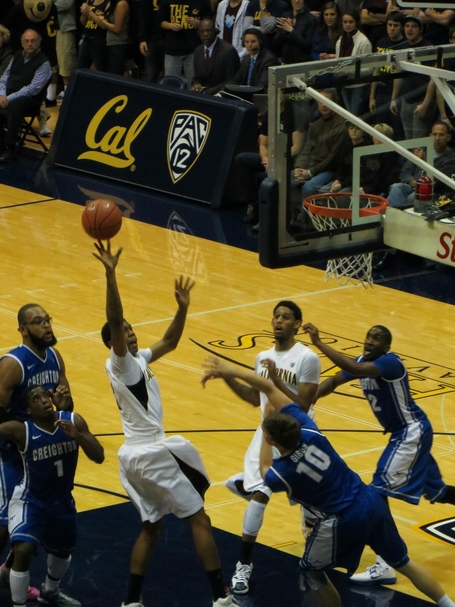 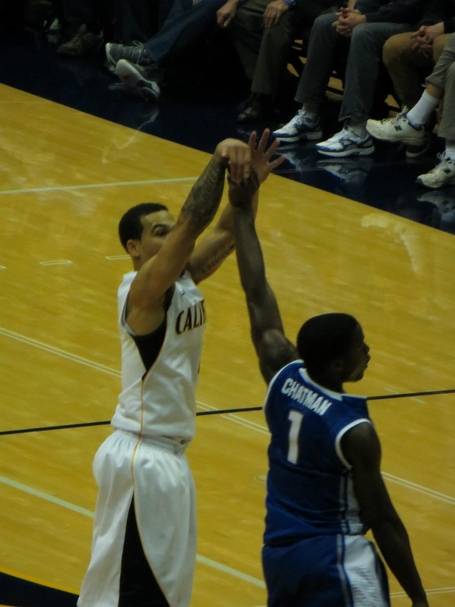 The halftime show was a bunch of kids dancing to a dubstep song. Actually quite good. 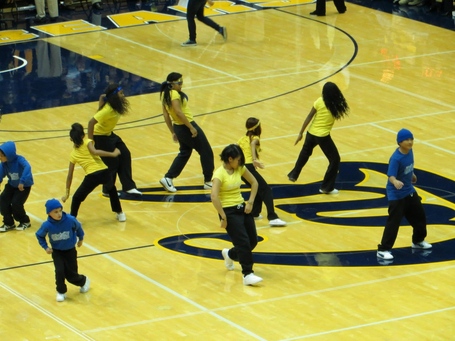 Here is the chunk of Memorial's Benches that I obtained from the Wooden Duck. More may be available, contact them here. 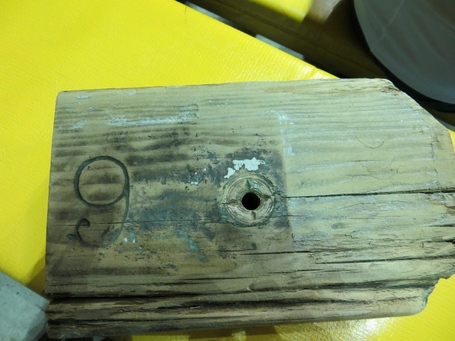 00 was this huge beast of a man. But check out the shoes: 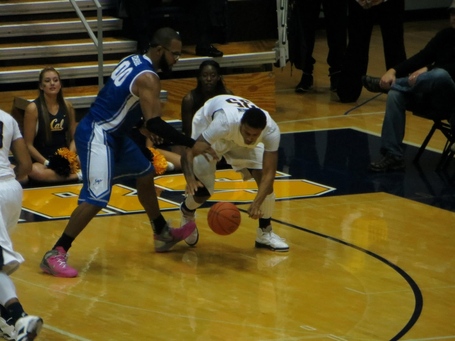 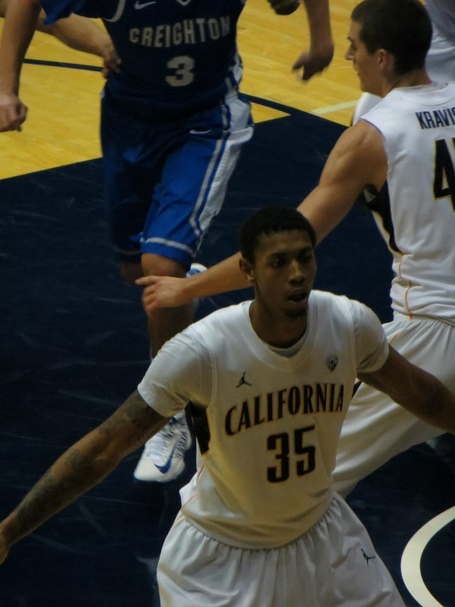 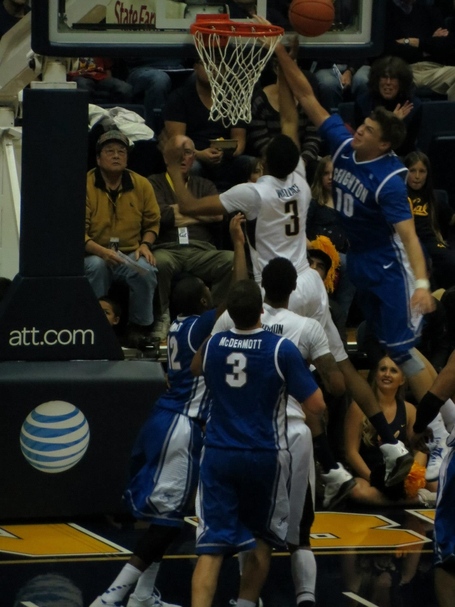 Jerome Randle was at the game! Yay! The crowd went crazy when they showed him on the big screen. Although, it is kinda awkward that they put him in this 1 seat row. Who would want to sit there?? All by your lonesome. Why does that seat even exist??? 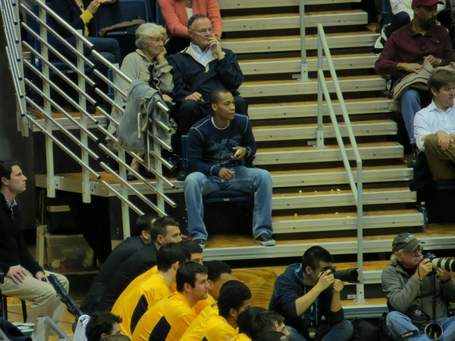 Also, former Cal coach Lou Campanelli was at the game. Surprised he didn't run onto the court to scream at the officials. Seemed right up his alley!

If you missed it, we did a 3 piece story on the legal saga of Lou Campanelli's lawsuit against Cal. 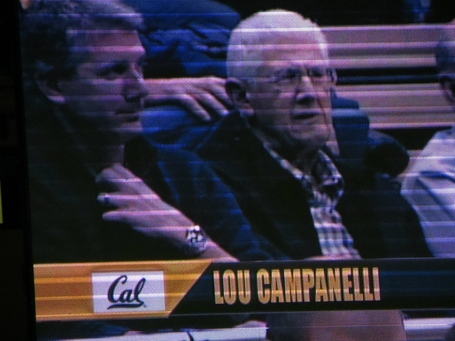 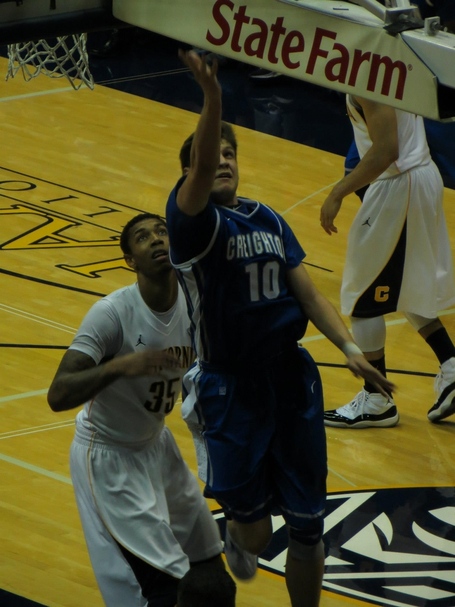 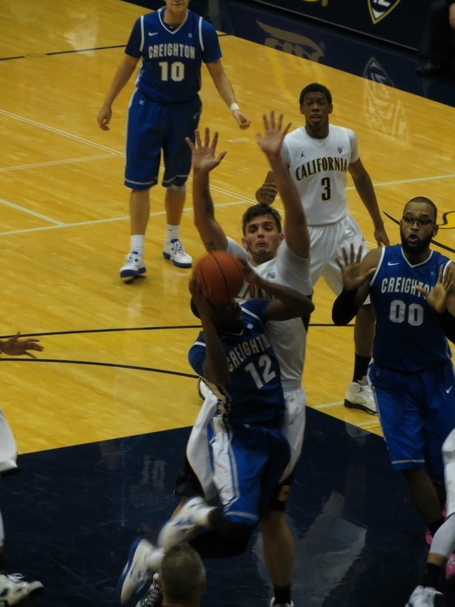 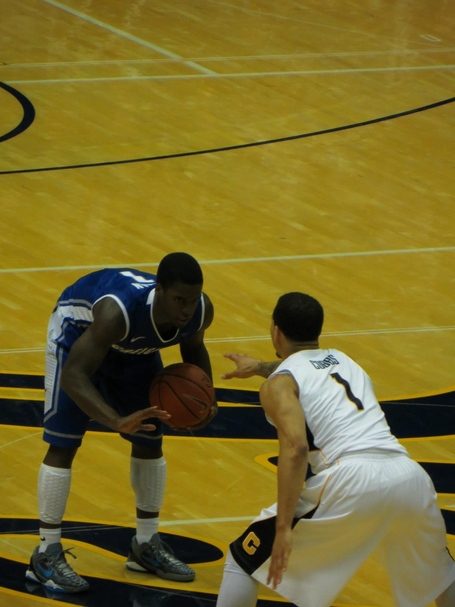 Cal often managed to get within a few points, but Creighton would then hit a spurt of 3s and get back up by 8 or 9. Our D kinda struggled a bit in the 2nd half. At the tail end of the game, the officials called a bunch of fouls on Cal. It was all on the other end of the Court, so I couldn't really see what was going on.

The student section was going ballistic. At one point, I saw valued CGB reader FrankCohen being restrained by valued CGB reader MicMan13. Later, I saw him being escorted out by Cal staff. Hope he is OK! Great to see the passion, though.

Of course, Terrible Ref and History's Greatest Monster Mike Greenstein was the ultimate culprit as usual. I didn't even really see what he did, but the student section was chanting GREENSTEIN SUCKS a lot. 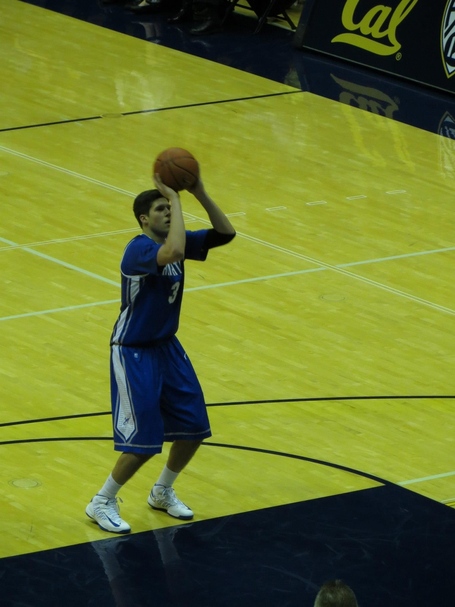 So, Cal had an opportunity with Wisconsin, UNLV, and Creighton to make a statement. Instead, we went 0-3 with a blowout loss to Wisconsin. UNLV and Creighton were ultimately winnable games, but whether it was poor free throw shooting or inability to finish at the basket, Cal couldn't get it done. I am extremely happy with the job that Montgomery has done so far with Cal, but this is a frustrating moment in his tenure. I am sure nobody is more frustrated than he is. I have complete faith him in to fix it during Pac-12 play, though. Hope I'm right! 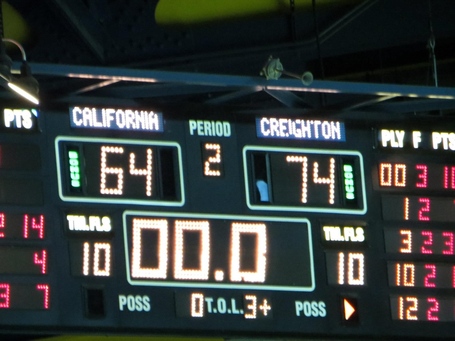