If it is on the internet, IT HAS TO BE TRUE!

[Update: Feldman is ALL IN on this one:

So, there you go. Time to take off that question mark!]

Football Scoop (who go the Sonny Dykes news perfectly) is reporting that Wisconsin LinebackersCoach Andy Buh will be the next DC at Cal:

He is bringing Randy Stewart back as some sort of position coach. Stewart has coached LBs and DBs, but I didn't see specifically what position Stewart will be coaching.

Arkansas: Bret Bielema has announced that Charlie Partridge will join the staff as defensive line coach. Sources tell us that linebackers coach Andy Buh is likely to join as well. (See Sunday AM update)

We haven't seen anything official yet. A scouring of tweetsylvania did reveal a Texas Tech Rivals site saying the same thing.

Sonny Dykes agreed with Andy Buh as his DC at Cal late last night. What's that mean for #TexasTech? It means your DC is likely Dave Aranda.

It is unclear whether Chris Level received his information separately from Football Scoop or is relying on them. I will tweet them and report back what I hear.

Football Scoop seemed to like this move by Dykes:

Buh and Stewart are two coaches the High School coaches (and players) in CA will know and love seeing more of. Good additions by Sonny

Both coached for Cal years ago. Here is Stewart's Cal bio:

COACHING: A large part of Cal's steady rise to the top of the Pac-10 on defense in recent years resides with secondary coach Randy Stewart, who enters his fifth season on the Golden Bear staff. His work in the development of players such as Marquis Smith (third round draft choice of the Cleveland Browns in 1999) and Deltha O'Neal (first round draft choice of the Denver Broncos in 2000) has been evident in recent years.

Stewart has also had a huge impact on the recruiting front, as he was primarily responsible for the addition of Kyle Boller. In 2000, he added the title of Cal's recruiting coordinator, overseeing all of Cal's recruiting efforts and working closely with the High School Relations administrative position.

In 1992, Stewart accepted an offer to join the Nevada staff, coaching the defensive backs for head coach Chris Ault. During his two years with the Wolf Pack, he had two players drafted by the NFL, with Forey Duckett and Brock Marion going in the 1993 draft. Stewart stayed at Nevada for the '93 season when Jeff Horton was elevated to the head coaching slot. He then moved the next season when Horton accepted the head coaching position at UNLV and Stewart spent the next three seasons (1994-96) as the Running Rebels secondary coach. There, he played a big role in helping the Rebels to their first bowl berth in 11 years when they captured the 1994 Big West title.

Here is Andy Buh's bio from the 2000 Cal football media guide, when Buh was a defensive assistant. Obviously, he's done quite a bit more in his career since then. 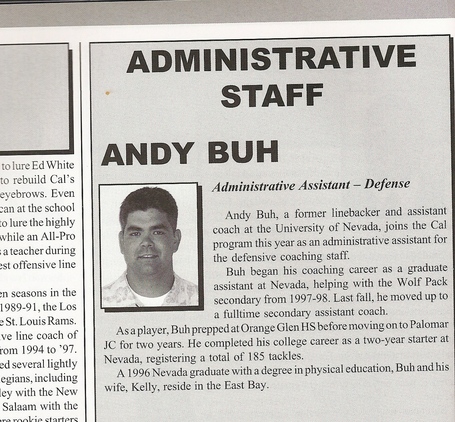 If we hear more, we will provide the word. If anybody hears further confirmation or anything official, post it below! What do you think about this move (if true!)? GO BEARS!