Let's look at some photos of the Cal v. UW game. Why? Pure masochism!

Share All sharing options for: Cal v. UW Photo Essay I: First Half 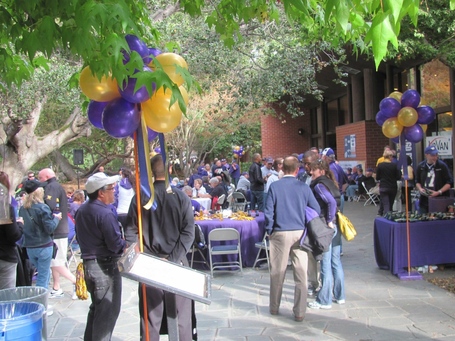 BTW, note that if you wanna make of the photos larger, just click on them (or open them up in a new tab). The scene at Berkeley wasn't that much different from a non-gameday Friday. There were a few more people wandering here and there in Cal or UW gear. Bear's Lair was packed. But since they didn't have the parking lots open to fans, there were no real tailgates to be had. :(. When I went to go see some friends who work at the Alumni House, they were just working. Like a standard Friday. I guess this is the future with weeknight games each year (hopefully away!). 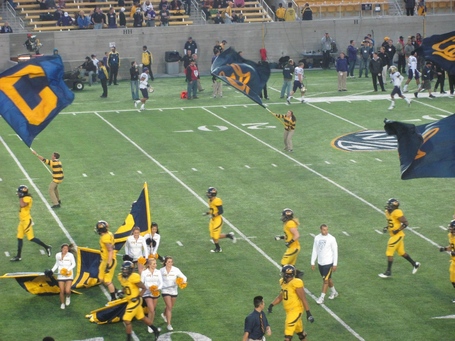 Before the game, MicMan13 helped hype up the crowd. Note that the caption people don't always get things 100%. 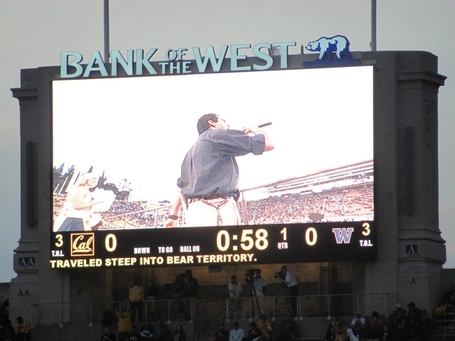 Here is the attendance at gametime. It actually filled up considerably more than this, but still. This is 40 seconds prior to gametime here. 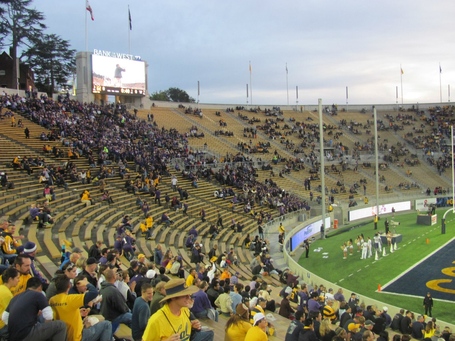 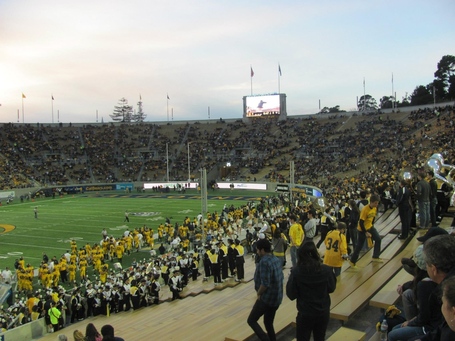 They had a lot of Calympics stuff at the game. On the way in, I walked by the group of Calympians waiting to enter the stadium. The players were talking about the Olympics that they watched. Presumably, these were all filmed over the summer, so it was right around/after the Olympics themselves. It woulda made more sense, I think, to have the Olympics stuff in an earlier game closer to the actual Olympics.

By early November, I was a bit fuzzy on everything that had transpired months prior. Perhaps the point was to refresh everybody's recollections. And it was great to see people being honored for their awesome work in London! 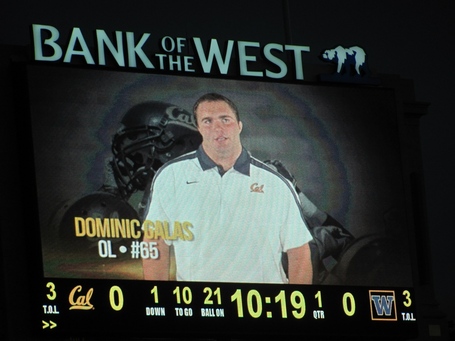 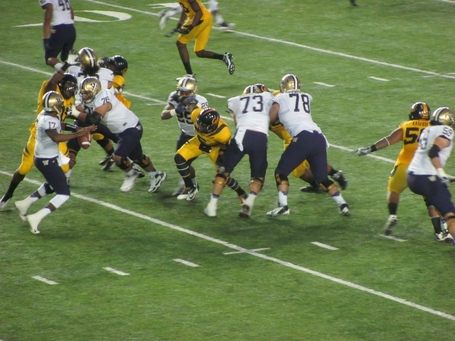 Notice the ESPN logo on the back of the sound guy here (as Bigelow runs back towards the huddle). Since the game was on ESPN, you just KNEW we'd lose. I'm surprised it was this close! 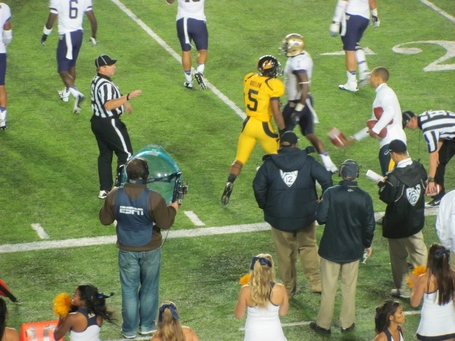 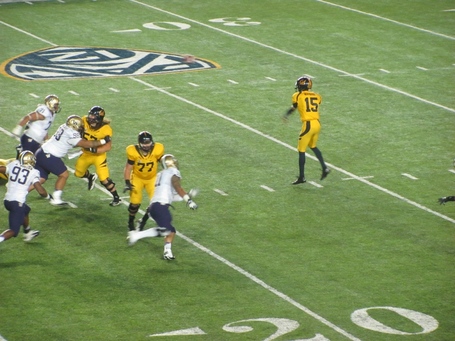 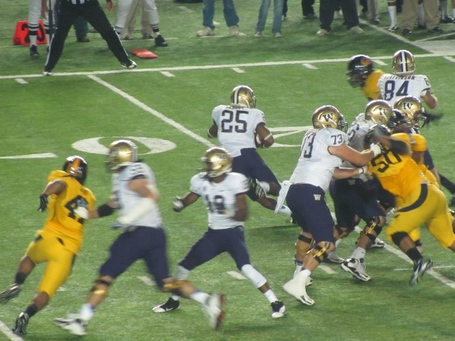 The game was actually a really fun game, despite the losing and general ineptitude. Lots of back and forth. A very close game. Tons of big plays. Just not a lot of scoring. And too many Cal turnovers. 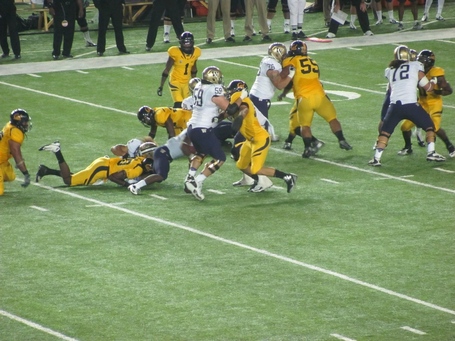 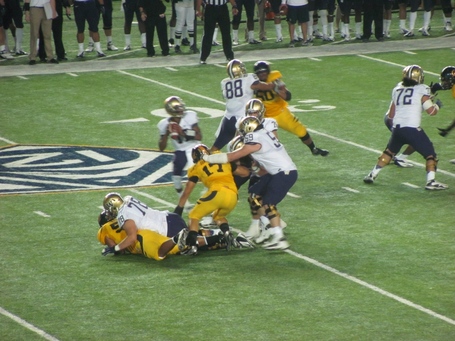 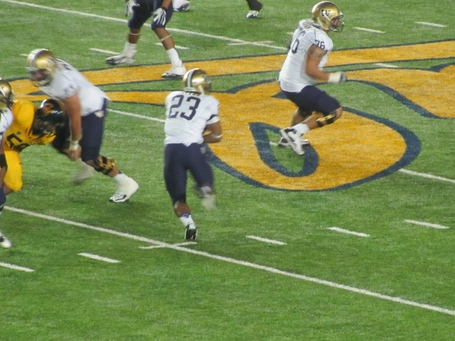 Some more Calympic coaches who were honored during a break. 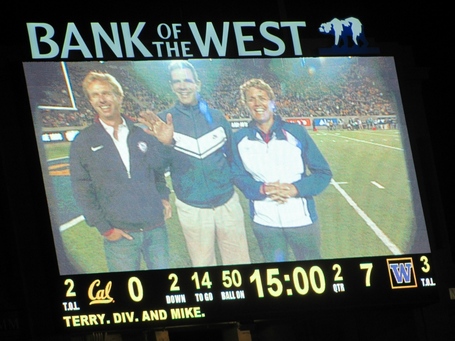 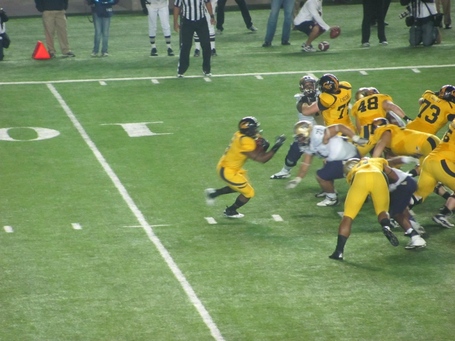 Caitlin Leverenz is an Olympic medal winner (Bronze, I believe) and was honored with the Honda Sports Award Winner. Presumably, she gets a new Honda, which seems more like a punishment than a reward. But I don't make the rules, I just make lame jokes about them. 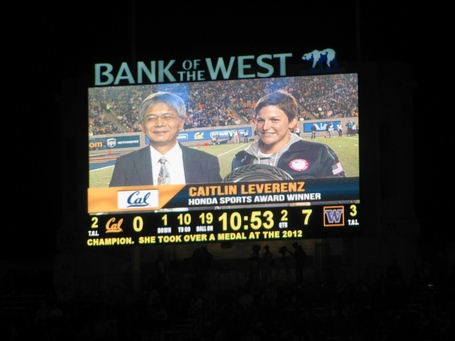 Birgy came on to plead with everybody to vote Yes on 30. He tried to be all coy about it, but he also failed at trying to be real coy about it. His plea that we vote Yes On Mondale was confusing. 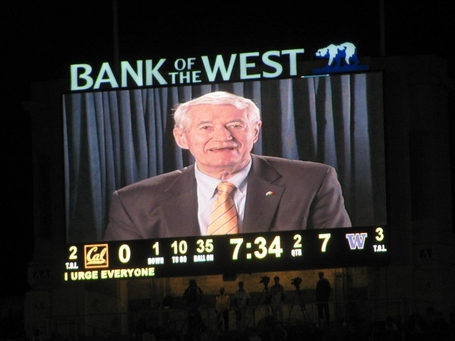 Then, in the clear highlight of the game, they aired a Natalie Coughlin highlight video. Thank you and Good Night! 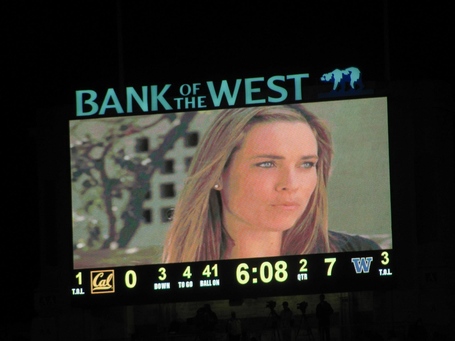 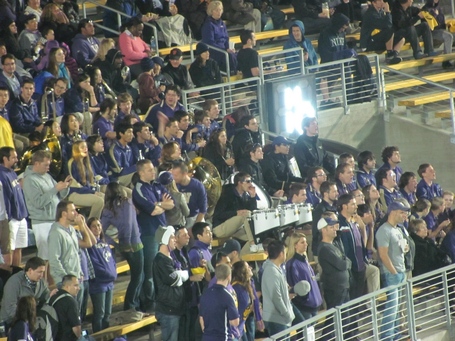 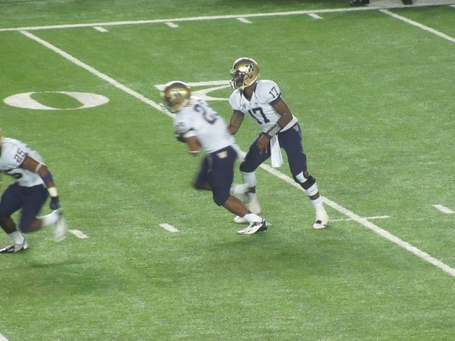 Cal had actually played really solid in the first half, outside of a few disastrous turnovers. Cal had stopped UW on two separate 4th and 1s. Cal really had put themselves in a position to take a big lead into the 2nd half. Instead, it was tied at 7. Would Cal pull it out in the 2nd half? If you don't know the answer, remember that IGNORANCE IS BLISS!