Well, at least it's over. The Bears have turned in one of the worst seasons in school history. Why couldn't Tedford get more out of his team in final game as a Bear?

A bitter end to a bitter year.

Of all the blowout losses we've had to endure over the past few seasons, this one was the toughest to sit through. Not only did the game drag on for nearly four hours, but the performance was a terrible way to end Tedford's career at Cal. I expected more from the team. Even if they did not win, I expected the Bears to put forth a tough, gritty effort--one final hurrah for Coach Tedford. Alas, it wasn't meant to be.

As has been the case in most of these games over this losing streak, the scores are terrible in every category. As least this time we don't have a 40-point drop in our win probability for the next game. Our suffering has finally ended.

Everyone earns the Official Inauguration into the Old Blues award (except those who were already Old Blues). Congratulations, you have suffered through the worst season since 2001. And in some ways, this was worse. No one expected a three-win season in August. At least the Holmoecaust was preceded by a few years of futility. Let us commemorate this monumental disappointment with a sad bear. 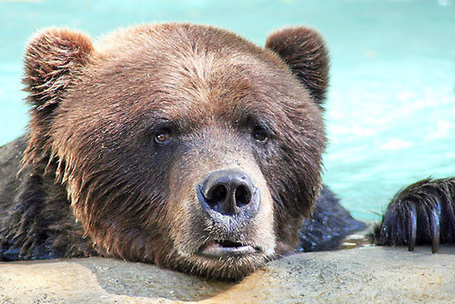 Now onward to the usual awards!

First we have our Sunshine Pumpers, beacons of sunshine amidst the steady Corvallis rain.

What is this I don't even.

Clearly many of us were extremely disappointed with the outcome.

That, my friends, is a 13-way tie for the top Old Blue spot.

Finally we have The Voice of Reason, which goes to those whose grades were closest to the community average.

The Voice of Reason:

May your level-headedness guide you steadily through the ups and downs of this unusual offseason we're about to face.

Now let's move onto the comments. Endless thanks to JahvidKnowsBest and UncleSam22 for gathering these comments over the season. This was a very bitter season filled with plenty of anger and frustration. Fortunately, there's something about misery that brings out the best in us. We had plenty of unhappy comments, but we also enjoyed some morbid humor and some very creative report cards. Thank you readers for keeping things entertaining through even the darkest of times. And thank you for your continued participation in our weekly report card series. May next year's report cards be the best ones yet. Go Bears!

Jacobs.: At least it is over

mk27: I didn't watch the game because I knew it would be miserable. Thus I enjoyed my Saturday night instead.

npyoung35: Not watching the game is the best gameday experience.

CalBandGreat: Didn't watch the game because I thankfully don't have the Pac 12 network. Just hung out for the 3rd and 4th QT threads and looked at photos of Kate Upton. All in all, a good gameday experience for me.

CoBears: I can't believe I actually went to the game. Gameday experience? Cold, wet, and a dark day for Cal football. Having been to Tedford's first game against Baylor when we put up 70 points and all seemed right with the world, this truly was the bookend from hell with us looking more like Baylor did way back on that day. We were pitiful.

Bearly Legal: It was exhilarating.

Rose Bowl Oski: P12N had pathetic coverage. Cal kept getting called for personal fouls and other penalties, but instead of attempting to show what the foul was, the announcers just prattled on about how Big Game was scheduled for October and Cal had no byes, as if it was Cal's choice and not the conference's -- Horrible.

prd74: Score given accurately reflects my opinion of this terrible effort

c98: I sat there and "experienced" every minute of it. I stayed to witness Tedford's Grand Finale: Get sacked, then quit with time left on the clock. If only he'd remain true-to-form and quit tomorrow with time left on his contract...

BearShitOnTrees: Tedfraud, please exit like a gentlemen and agree to a settlement that doesn't screw over Cal any further.

rollonyoubears111: wow! that was a great run! Way to go team! Playing for your coach and more importantly for respect! NICE

rollonyoubears111: #73 always plays with discipline and never holds or does a false start. The WR's lined up well, ran great routes, and blocked flawlessly!

koalaballa: Not very prolific. What happened to you, Tedford?

The numbers by themselves don't look absolutely horrible:

But considering the opposition has DOUBLE the pass yards per attempt

I think winning a shootout isn't going to be possible with what we've got.

fuzzywuzzy: Thanks for the memories, Keenan

iwasthere4theplay: Bridgford obviously needs more reps, but seems like he can be a good QB. Too bad he didn't get any reps with the 1's until now. I guess it also is unfortunate he didn't have a highly ranked WR/DB brother. The line needs to play better as well; how are these guys getting pancaked?

1988goldenbear: I guess this is one area where we can stop the second-guessing of the coaches. Maynard was significantly better than Bridgeford, just as Longshore was significantly better than Riley. But ultimately this has to fall on the coaches for not developing the backups to be ready to step in. Kline will probably get a good shot at the starting job next year, but we better figure out how to protect.

BTown85: Isi is a stud. Good luck to him. Pound for pound, toughest guy out there.

1988goldenbear: We are going to miss Isi and CJ. Bigelow and Lasco need to figure out how to hang onto the ball.
justbear: thank you Isi and CJA

4Ever Golden: I miss alualu and mebane:(

rollonyoubears111: Way to go with pushing that O line back and covering the gaps! bravo!

texashaterforlife: Crabbe at the buzzer

fuzzywuzzy: That one play earned the "stunk the place up" award, 0.0

iwasthere4theplay: Again, too many injuries and no depth on the line. Rushers are getting career marks against us

iwasthere4theplay: What can I say? I almost miss Alamar!

1988goldenbear: Leininger was decent. Coverage was decent. Bigelow almost broke one. I think we will be okay here moving forward.

Bearly Legal: Not special in any positive way.

koalaballa: We didn't allow any kind of returns on special teams. Not sure if it was the rain or what. But that's good, right?

4Ever Golden: Can we just all pretend we root for SJSU they beat BYU we'd lose by 30 to them and we all know it

koalaballa: Anytime you lose 62-14, how can you not blame the coaches? No offense, no defense, no discipline. Props to the players for showing up and not giving up.

But c'mon, we have the perfect season to point to things that we don't ever really want to do again.

fuzzywuzzy: Not that there's an obvious way to get the team fired up for this game, but I'm not sure they tried; the penalty issue has obviously never been addressed very well.

iwasthere4theplay: Poor game planning, no apparent attempt to simplify the offense for the players stepping in for the injured. I wonder about Blasquez as well. Why so many injuries this year? Maybe it's just bad luck, but it seems like it may be linked to the change in S&C coaching.

1988goldenbear: Not sure they could have planned for more out of the offense. Injuries limited the options, and penalties and turnovers killed us yet again. There is an incredible lack of discipline in this team, and that has to fall on the coaches. Riley has always done well against Tedford in scheme, and this year he had home field and better personnel, so this was no contest. That's sad.

Oski_P_Beer: 15 penalties for 172 yards with 4 turnovers in the 12th game of the season. Lose by 48 points the week after losing by 42 points. So the overall performance leaves something to be desired.

MCB-ear: May the force be with you Jeff Tedford.

Rose Bowl Oski: Thank God this pitiful season is over. Yes, Coach Tedford has to take a lot of the blame for this mess, but I have to wonder how this season would have gone if the team hadn't suffered 4 million injuries. Who knew that Dominic Galas's injury in August was just the opening of the injury floodgates. Someone ought to do a games lost to injury comparison. I can't imagine any FBS team lost more players to injury this season than Cal.

youcannotbeserious: monotonically decreasing throughout the game and since Washington State

1988goldenbear: I think these kids have fought through a lot of crap this season - injuries, the schedule, the pre-season recruiting fiasco, the death watch over Tedford. And although they haven't produced the results we wished they had, I think they have stuck together and played as a team. Even last night. This team has some deficiencies, but they seem like a really good bunch of young men.

iwasthere4theplay: I feel bad for the team. Lots of hard work on and off the field and not much to show for it. Coaches seem out of sync and in the second half of the season, no passion and enthusiasm. Appear to be disconnected from the team.

fuzzywuzzy: "Pick your poison" for us means picking the way we'll annihilate ourselves.

We used a combination of sodium thiopental, arsenic, and a flamethrower.

koalaballa: What a sad way to end the season, for the seniors to finish their careers, and possibly for Tedford after all his time at Cal. And of course it has to come against Oregon State, for whom many blame Cal's downfall starting way back in 2007.

There better damn well be some soul-searching at every level of the program this offseason, or you can be sure that I won't be buying season tickets as I have been for the last 12 years.

4Ever Golden: F+ WE LOST HARD BUT WE PLAYED THE GAME. SEAN MANNION FOR WORLD CONTROLLER

prd74: Team, time to hit the books. Coach, time to clear out your office.
Sandy, I really hope you hit another home run tomorrow.