A Golden Spotlight on Cal Football vs. Oregon State

Time to turn out the lights and strike up the band. Maybe next year will be our year. Before we turn our collective sights towards basketball, let's take one last look at hard-working senior.

Share All sharing options for: A Golden Spotlight on Cal Football vs. Oregon State

After an exchange of interceptions, the OSU Beavers quickly marched down and put seven on the board. Cal is trying to counter-punch. With CJ Anderson nicked up earlier in the drive, Isi Sofele just broke a long run to put the Bears in business with 1st and goal.

Cal comes out in 11 personnel, 1 TE and 3 WR. Oregon State counters with their base 4-3 defense and a single safety shaded towards Cal's TE. (top of the screen) Cal usually throws out this formation. In particular, we've had luck running a slant/corner combo with the single-covered receivers at the bottom of the screen. 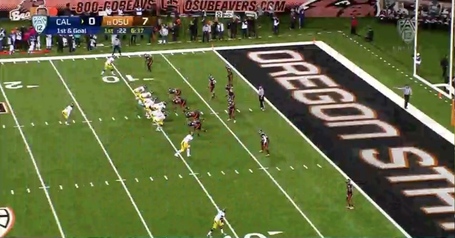 But Cal goes counter tendency with a run. Tyndall cuts their backside DT while leaving the backside DE unblocked. Schwenke locks up their playside DT while Adcock fires into the 2nd level to cut off backside pursuit. Jordan Rigsbee also moves forward into the 2nd level. Tagaloa and Wark double-team the playside DE at the point of attack. OSU's playside OLB makes a great read and quickly moves upfield around the end. 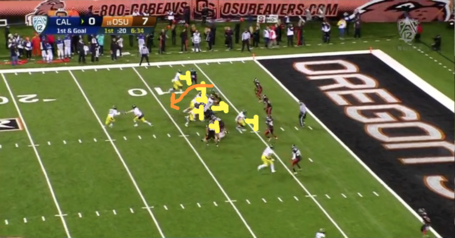 Wark and Harper move forward to double-team the safety. Jordan Rigsbee goes low to try to cut their MLB. Tagaloa drives their DE backwards and into the center of the field. Schwenke stays locked up with their playside DT and moves him out of the way. But the OSU OLB has Sofele in his sights back in the backfield... 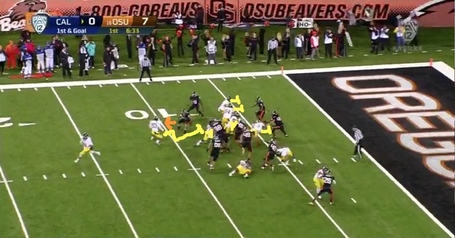 ...Sofele jukes the OLB and cuts it back upfield leaving him grasping at air. The Cal blockers have created a running lane! 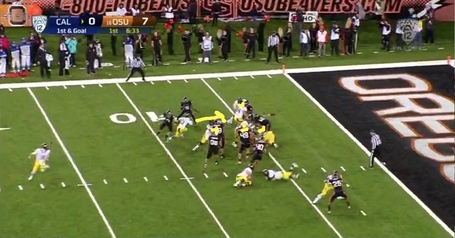 Sofele sees the hole and leaps over Jordan Risgbee. As a nod to the future, look at how Tagaloa is dominating his man. (just above the Cal logo on the left) 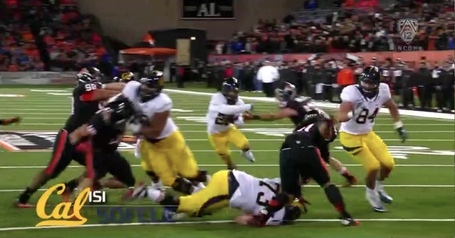 The OSU MLB regains his balance and makes a lunge at Sofele, but Isi covers up the ball and runs through the arm tackle. 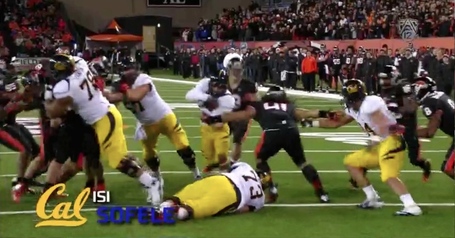 The remaining OSU defenders reach out, but can't get a clean shot at Sofele. He runs out of their grasping arms... 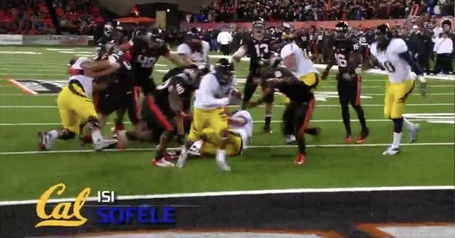 ...and crosses the goal line to tie it up. Touchdown Bears! 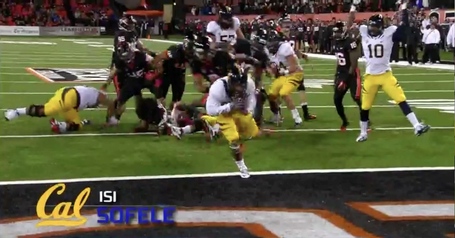 At the conclusion of this play, there was an inexplicable power outage and the rest of the game was canceled.

That's how I remember it, anyhow.

Perhaps thankfully, this is the last spotlight of the year. Thanks for your support and readership. More so than in most years, we retreat to lick our wounds and dream of better days yet to come. But come next fall, Memorial Stadium will still be waiting for us, and the old girl is absolutely beautiful. The Bear will not quit. The Bear will not die.