In a game that featured eight turnovers and 18 penalties, Cal's mistakes proved to be more costly as the Bears lost to Washington for the fourth consecutive time

Friday night at Memorial Stadium, Cal and Washington played one of those games that made you wonder what the heck that was, let alone what it was doing on national television. In a battle of "can you top this mistake," the Bears and Huskies traded assorted penalties, turnovers, and other errors. When the dust settled, Washington won the battle to be less inept and came away with a 21-13 victory over Cal. For Washington (5-4 overall, 3-3 Pac-12), it was its fourth straight win over Cal (3-7 overall, 2-5 Pac-12) in the series and its first road victory of the 2012 season.

The mistakes were unleashed from the getgo. Cal's first two possessions ended in turnovers, killing promising drives that should have resulted in points. On Cal's first offensive possession, the Bears drove 50 yards in five plays before Isi Sofele ruined an 8-yard gain by fumbling the ball away to the Huskies at the UW 21-yard line. After Washington parlayed that Cal turnover into a Bishop Sankey touchdown run to take a 7-0 lead, the Bears answered with another promising drive, marching to the 16-yard line due in large measure to a 36-yard pass play from Zach Maynard to Chris Harper. But that drive also ended in a turnover, as Brendan Bigelow fumbled the ball away after catching a bubble screen. The Huskies recovered inside the 10-yard line and another Cal threat was snuffed out

Despite shooting themselves in the foot repeatedly, the Bears managed to stay in the game. The defense enabled Cal to do that, as the Bears stepped up with big plays to kill Washington scoring threats. Despite the fact that Sankey burned the Bears to the tune of 189 yards on 29 carries on the night, Cal managed to stone Stankey twice on 4th-and-1 plays inside Cal territory to keep Washington from doing more damage on the scoreboard. And after Cal's offense finally broke through to tie the game late in the first half on a Chris Harper touchdown run on a reverse, the Cal defense made another big play to preserve the tie. With Washington poised to take the lead in the final minute of the first half, linebacker Nick Forbes intercepted a Keith Price pass to kill the Huskies' scoring threat and give Cal momentum heading into the second half. Tied at halftime, it seemed that the Bears had weathered the storm of their own ineptitude to stay in the game. 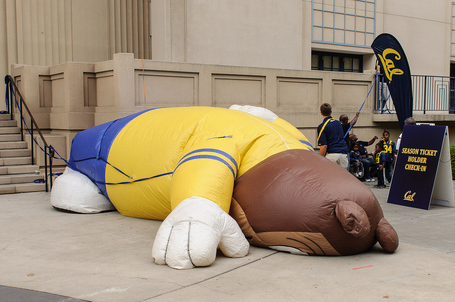 But the mistakes just kept on coming for both teams -- and for the Bears in particular. Cal managed to take a 13-7 lead in the third quarter on a pair of Vince D'Amato field goals, one of them set up by a 64-yard C.J. Anderson run on a 3rd-and-23 play and the other set up by a Sankey fumble recovered by Forbes inside Washington territory. In neither case, though, did the Bears capitalize with touchdowns, as Maynard could not connect with Harper on third down passes to the end zone. The red zone failures would ultimately bite Cal in the tookus when Washington's big tight end, Austin Sefarian-Jenkins, caught a touchdown pass from Price on a 3rd-and-goal from the Cal 29-yard line, a deflating play for the Bears' defense considering that it had moved the Huskies backward from what was originally a 1st-and-goal from the 9-yard line. On the touchdown, Sefarian-Jenkins, who caught eight passes for 152 yards in the game, outmaneuvered a much smaller defender in Cal's Steve Williams. The matchup of the 6'6" Sefarian-Jenkins and the 5'10' Williams begged the question of why Cal matched Williams up with Jenkins in the first place; indeed, earlier in the drive, Sefarian-Jenkins caught a 43-yard pass over Williams despite decent coverage. Though Williams is typically a good defender, asking him to guard the much bigger Washington tight end was...curious to say the least.

The Sefarian-Jenkins touchdown in the third quarter gave Washington a 14-13 lead that it would never relinquish. As hard as the Huskies tried to give the game back to the Bears, the Bears just would not take it. In a bizarre sequence, the teams combined for four turnovers in an 11-play span of the fourth quarter (including, for Cal, Bigelow's second lost fumble of the night). When the dust settled, Washington was the net winner on the turnover exchange, getting the ball at the Cal 28-yard line after the last turnover of the bunch--an interception and 33-yard return by former Cal recruit Shaq Thompson. Thompson's interception led to Sankey's second touchdown of the night, which gave Washington a 21-13 lead with 4:11 left in the game.

Though Cal had the time to mount a rally, it had to do it with without quarterback Zach Maynard, who left the game with an injury to his left knee, suffered on the first play of the following series. (Per tweets by Ryan Gorcey and Dan Greenspan, Maynard will undergo an MRI on Monday to determine the extent of the injury.) Backup quarterback Allen Bridgford completed only 2 of 7 passes for 26 yards, and finished with three straight incompletions from the Washington 25-yard line to turn the ball over on downs and essentially seal the game for Washington. When Bridgford's final pass, a wheel route intended for Anderson, went incomplete with virtually no chance at being caught, Cal's fate of a second losing season in three years became a cold reality. The Bears have assured themselves a losing season and no bowl game for the second time in three years, and (with seven losses already) are almost certain to lose more games this season than in any other season during Coach Jeff Tedford's tenure. With all of this season's gloom and doom, the likelihood that Coach Tedford will see a 12th season as Cal head coach becomes more remote with each poor performance the Bears turn in.

The game was not without some bright moments for the Bears. With fellow wide receivers Keenan Allen and Bryce Treggs out with injuries, freshman Chris Harper stepped up his game perhaps more than could have been reasonably expected. Harper caught seven passes for 101 yards and scored Cal's only touchdown of the game on a reverse. Both Harper and fellow freshman Darius Powe Jr. made incredible catches that are worthy of making an ESPN SportsCenter top 10 list. C.J. Anderson rumbled for 160 yards on 22 carries and had a career-long 64-yard run. The Cal defense gave up a disconcerting amount of rushing yards and had no viable plan for covering Washington's tight end, but still managed to keep the Bears close with three fumble recoveries and an interception. Forbes had an especially good night with two fumble recoveries and a key interception in the red zone.

But no amount of bright moments can take away the sting of yet another loss. Cal has dropped three straight and has seen its season spiral toward a crash-and-burn. It can only get worse, with Oregon coming to Berkeley next Saturday, they of the high-powered offense that can hang half a hundred on people without much of a sweat. With Cal already depleted and/or hobbled with injuries to key players such as Allen, Maynard, Bryce Treggs, Matt Summers-Gavin (who left Friday's game in the third quarter), Keni Kaufisi, Jalen Jefferson, and Kendrick Payne (who did not play Friday), the prospect of facing the Ducks is all the more daunting, with the potential for embarrassment high. And with the Big Game already behind us, and no Axe to try and win, one wonders whether the Bears will just play out the string, with little they can do to save the job of their beleaguered coach.

And with that, enjoy your weekend everyone.