Friday Night Lights: Q & A on the Washington Huskies with TheCassino of UW Dawg Pound

In its first Friday night game in many a season, Cal takes on the Washington Huskies - a team fervent Cal fans will recall due to certain events at the tail end of last year's recruiting season. Steve Sarkisian has the hyped Huskies at 4 wins, one more than Cal has amassed over the season. Cal will be looking to match Washington's win total this week. To find out more about the Huskies, we talked with UW Dawg Pound, SBNation's Washington portal. Head over and say hi; as always, Go Bears!

Share All sharing options for: Friday Night Lights: Q & A on the Washington Huskies with TheCassino of UW Dawg Pound

1. Washington perpetually seems to be "just on the cusp of coming back", but Steve Sarkisian's record seems to speak otherwise. How do you guys feel about Sarkisian and the job he's done relative to his expectations? What do you want more of? What could you do without?

I think Sarkisian has done a pretty good job considering the state of the program when he took over. Though there were some talented players, there was a serious lack of depth, especially on the lines. The progress Sark has made hasn't been as overnight as some around the conference and country, but it has been consistent.
We always want more wins. But aside from that it would be nice to see better recruiting and development on the offensive line.
We'd like to see fewer injuries and fewer blowout road losses.

2. Talk a little bit about what Justin Wilcox has done to improve UW's defense. And since this is unfortunately a relevant topic for us, do you think he would make for a solid head coaching hire?

Justin Wilcox has improved the defense in a few ways. Firstly, he's made the team more assignment sound. Last season assignments were blown frequently every game, and that's something that is much less prevalent. Second, he's brought a defense that is more adaptable in terms of its alignment. He's not married to the 4-3 or 3-4, he's going to use whichever one he feels gives the team a better matchup against the offense they're facing. And lastly, he's not trying to force square pegs into round holes. Safeties have been moved to linebacker to give the team more speed, and different packages of players have been used situationally. These are all things that were absent previously, as Nick Holt just seemed to want to do things one way and keep trying to make it work.
I think Wilcox would be a pretty solid head coaching hire. He's a bright guy and has been successful at what he does, so it's really just a matter of time until someone gives him a shot. It's also pretty likely that anyone that hires him will get Peter Sirmon as well as a DC. Sirmon followed Wilcox from Tennessee, seems to be his protege, and is an excellent recruiter. But with all first time head coaches, you never really know.

3. I know UW's offensive line has been ravaged by injuries. How healthy is the line expected to be on Friday, and how have they played lately?

The line is as healthy now as it's ever going to get this season. It has been a little bit better of late with the return of Ben Riva from a broken forearm, but it's still a work in progress. They're starting one freshman, three sophomores and just one senior, so four of them are still cutting their teeth, and most of those guys are starting before they're really ready to. The line isn't going to be good this year, but they could be building some nice depth and experience for down the road. 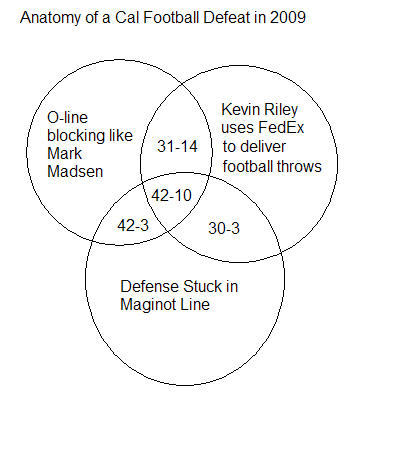 The intersection of all three factors resulted in Cal's loss in 2009.

4. Has Keith Price regressed this year, or are his struggles simply the result of having less talented players around him?

Both. He's missing throws uncharacteristically, but I'm sure it was a lot easier when guys like Jermaine Kearse and Devin Aguilar are finding soft spots in the defense, and Chris Polk is keeping opponents honest. The offensive line has been a mess, and I think that the injury to James Johnson (who would have been the starter opposite Kasen Williams) has hurt quite a bit because he is far and away the team's most experience receiver.

5. Washington has experienced 3 blowout road losses . . . but Cal clearly isn't a team like LSU, Oregon or Arizona. How nervous does going on the road make UW fans feel right now?

Pretty nervous. Given this team's track record not only this season, but during the entire Sarkisian tenure, any road game is going to be unsettling. It's going to be that way until they prove otherwise. Cal is too talented a team for them to not play well and still win, and the Huskies haven't played anywhere near well on the road yet.

6. Tosh Lupoi. How have the results been on the field with his D-line?

The results have been just pretty good. He's working with a young group, but has gotten some improvement out of them. Danny Shelton looks like he could be a star in the making, and Josh Shirley continues to be a pretty good pass rushing specialist. Still, they're not dominating any games and regularly struggle to get pressure, but there results so far have been positive. 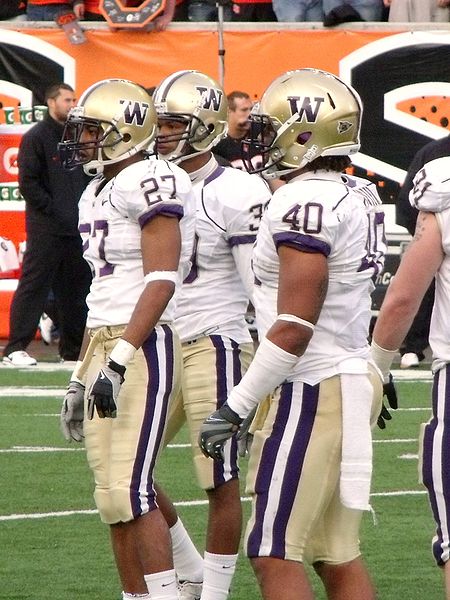 After a disappointing defensive campaign in 2011, DC Nick Holt was fired in favor of one Justin Wilcox, formerly of the California Golden Bears. Photo by By Sarah McD from Portland, OR, USA (Husky Defense) [CC-BY-2.0 (http://creativecommons.org/licenses/by/2.0)], via Wikimedia Commons

7. How well has he been recruiting?

It's so hard to judge recruiting before signing day, and Cal fans know that as well or better than anyone, but the results there have been pretty fantastic so far. They've gotten commitments from a lot of highly regarded recruits, and several from Northern California. It's looking like the Huskies may end up with the second best recruiting class in the conference, behind only USC's ridiculous haul.

8. Tell us of Shaq Thompson!

Shaq is fun. He's big enough to be a backer, speedy and agile enough to be a safety, and he plays hard all the time. They call him their starting nickle, but he's lined up all over the field this season. The play he's made a few times that has really impressed me this year, and he's done it a few times, is when he's being blocked, he'll drive the blocker toward the ballcarrier and just reach through and get a tackle through the blocker. It's really a pretty amazing feat, and I can't even imagine the strength required to do it. He's already pretty special, it's going to be a really fun career to watch.

9. Has anyone stepped up to replace Chris Polk?

Bishop Sankey is having a pretty nice season. He had 100 yard games against Stanford and Oregon, and has been a factor in every game. He's not a big back like Polk was though, and coming into the year it looked a lot like he was going to be sharing carries with Jesse Callier to keep both of them fresh and reduce injuries. But then Callier tore his ACL in the opener and there really isn't a quality backup to Sankey, so even if the team is running the ball well it's kind of a tricky thing where they want to give him carries without running him into the ground. He's got a bright future, and will be as good as his offensive line allows him to be.

How Washington fans perceive Oregon's program. Washington and Oregon have a storied rivalry filled with contention and mercurial figures. via lh6.googleusercontent.com

10. UW handed its new staff some hefty contracts this past offseason. Has it been money well spent so far?

Absolutely. I can honestly say that this team would not have 4 wins with the old staff at the helm. When you look at the difference between what Stanford and Oregon State and USC did to the defense last year and what they did this year there is no comparison.

11. The UW offense has struggled at times this season. What does Cal need to do to stop Price and company?

The key is to keep them in front of you. If you give up small chunks they'll eventually sputter and either get sacked, turn the ball over, get a penalty or do something else to end the drive. The guy you have to prevent from making a big play is Kasen Williams. They finally just decided to give him a few shots down the sideline against OSU, and it set them up for points. With Austin Seferian-Jenkins not completely healthy and the rest of the receiving corps young and inexperienced, Williams is the only real big play threat. If you contain him they might move the ball for a couple first downs, but there just aren't enough playmakers to put up points with how poor the offensive line has been.

The Pac-12 coach I dislike the most: David Shaw. I can't stand his smug attitude. Every position on Stanford is either "the best in the country" or the "most underrated" somehow. I can't decide if I want him to get fired or if I'll be content with him staying in Palo Alto forever as he slowly drives that program into the dirt.