The lone Cal team in playoff action right now, No. 17/18 Cal Women's Soccer face the tough task of playing No. 4/5 San Diego State at San Diego State for the 2nd round of the NCAA tournament. The Bears (16-5) are no stranger to having success on the road this year, with a solid 9-1 record on the road. San Diego State (20-1-1) are owner of a perfect 13-0 home record, however. Nevertheless, I do believe the Bears have quite a decent shot to pull off a huge upset over the No.2 seed in the region. ROLL ON YOU BEARS!

Time: 7 PM PT (but may be delayed due to the earlier UCLA-Kentucky game)

Despite not being awarded with a first round home match, the Golden Bears padded their outstanding road record by claiming a 1-0 win over the Pepperdine Waves at Malibu, CA, in extremely windy conditions. Mexican U-20 national team member, Ariana Martinez, sent the Bears to round 2 with an unassisted game winner in the 87th minute. Cal goalie Emily Kruger only needed to make 1 save for the shutout. After being slightly outshot by the Waves (5-6) in the first half, the Bears dominated the second half by outshooting the Waves 8-2 while getting 5 corners to land the eventual game winner.

The match was attended by some Cal Soccer alum, including Megan Jesolva, Alex Morgan, and Courtney Hooker. Shown below with head coach, Neil McGuire (photo is from the Cal Soccer Facebook page). With the Bears remaining in the California this weekend (in San Diego, site of this year's College Cup (Soccer's Final Four) as well), I expect plenty of Cal fan/alum to be there to root on the Bears. 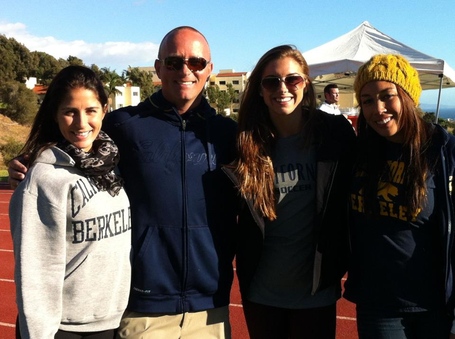 No. 4/5 San Diego State (2nd seed in the region), winner of the Mountain West Conference regular season and tournament, is a tough opponent for the Bears. The Aztecs advanced to the 2nd round via a 3-0 victory over Cal State Northridge last week. They are owner of the top winning percentage (.932) in the country and are currently in the midst of a 13 match win streak.

Both teams have really high shot per game averages for the year, it would be interesting to see who win the battle of possessions and get more chances. Cal has slightly more weapons than San Diego State, but also have allowed a lot more chances to the opponent.

Against common opponents, both defeated Pepperdine 1-0 and Arizona State 2-0 while lost to No.1 Stanfurd 1-0. While the Bears lost 1-0 to Santa Clara, the Aztecs tied them 1-1.

Q. Can you talk about how good this California team is?From a talent standpoint, they are very good and very deep. They have done a great job recruiting to put themselves in a great position that they are. They are a little on the younger side, but they still have some experienced players. (Betsy Hassett) is a senior who has played in the Olympics. So they have some experience mixed in there as well, but they're a very good team. As we go into the Tournament at this point, there's not an easy game for anybody. For us, playing basically the Pac-12 for the next however many games depending on the results, we're going to have to bring our best. (California) was third in the Pac-12, so they're a very good team. We saw them last year. It was a pretty even game. They probably had a little bit better of a game up at their place. We're obviously two different teams this year as well. We've both made changes to our rosters and obviously late in the following season. It was 40 games ago, but I think it will be a good matchup.

A quick introduction about the 2012 Women's Soccer Team:

For the season, the Bears has outshot their opponents 324 to 213 and outscoring at 44 to 21 (having both more chances and converting at a higher rate).

Scoring-wise, the Bears are lead by the recently crowned Pac-12 Freshman of the Year, Ifeoma Onumonu, and her team leading 11 goals and 27 points (from the goals and 5 assists). Onumonu also has a team high 41 shots on goal for the season.

The key playmaker and captain for the team is senior New Zealand Calympian midfielder, Betsy Hassett, who is tied for the team lead in assists with 5 and second in total points with 17 (6 goals, 5 assists).

What has been pretty amazing for the Bears offensively is that 14 different Bears has scored a goal this season, with 9 Bears having scored at least 2 goals. Katilyn Fitzpatrick and (former American Juniors contestant) Grace Leer both have 4 goals. Lauren Battung and Celeste Boureille each has 3 goals. In the Bears' usually high power offense there are plenty of scorers.

The key player for the Bears' success however is the junior goalkeeper, Emily Kruger, who was terrific in the Bears' last two games (a 1-0 home loss to No.1 Furd and the shutout of Pepperdine when she wasn't tested as much). Kruger has a goal allowed average of 0.97. Recently, Kruger was named to the Pac-12 All-Academic 2nd Team for her 3.63 GPA (she is majoring in Peace and Conflict Studies...possibly learning that one does not need to make war but just need to have a good defense).

For the season, the Bears actually has a better road record (8-1) than at home (7-4) which can probably be attributed to a tougher schedule at home. Nevertheless, the solid road record does indicate that the Bears don't mind playing on the road and has the experience to pull off wins in hostile territories (and claim it as a Bear Territory).