Missy Franklin has officially signed her letter of intent with the California Golden Bears women's swimming program, and will be swimming with Cal for the next two seasons before turning pro before the Olympics.

Above is the video of Missy officially announcing her reasons and her plans.

We have proof that this is real! Here is the actual letter of intent via Cal women's swimming/diving Facebook. 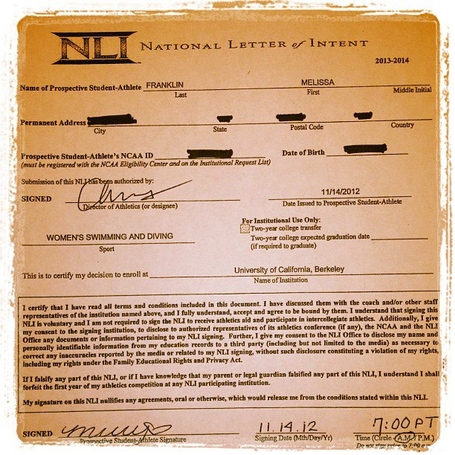 For those who don't have time to peruse the video, here are the details.

Franklin's plan is to swim for two years as an amateur before turning pro after her sophomore season. That would give her 16 months to prepare for the 2016 Olympic Games in Rio de Janiero. Regardless of her swimming plans, Franklin plans to stay at Cal as a student and earn her degree.

"I think a big draw for me was the pride in saying you have a degree from Cal," Franklin said. "I think that's such a great honor to say that."

She describes Cal in one word: "perfect". This is a statement that showcases immense wisdom beyond her years.

Her teammates call Franklin "energetic" and "smiley". Kind of comes out in this video, doesn't it?

Franklin talks a lot about head coach Teri McKeever (who was also her coach in London) and how much she wanted to be coached by her. Here is McKeever talking about the whole of the recruiting swimming class.