It was close for a while there.

Last we left off,Cal had played Oregon pretty well in the first half. Last year, Cal was right with Oregon up in Eugene in the 1st half, but Oregon took off in the 2nd half for an easy victory. Would the same happen here? Yes. Yes, it would. But for the first 2.5 quarters, it was a game! A bit stressful.

To help calm us down, the California Marching Band came out to do the delightful music of Beyonce. The drum major was doing his thing as noted above. 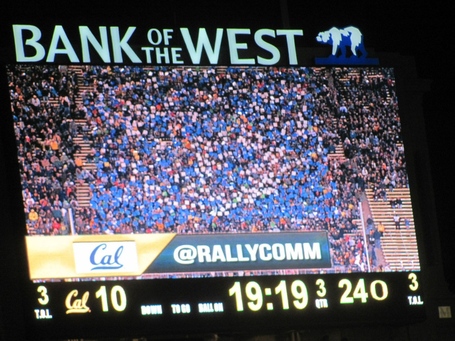 What confused me was that the band kept making the Oregon symbol on the field. Why is that? 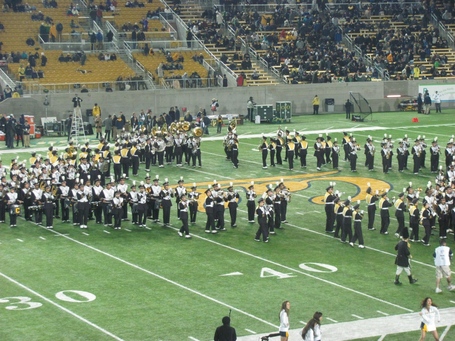 It was SO cold, I felt bad for the dancers here. In particular, the women who wore little more than a leotard. I am going to guess and say that that is how Beyonce has it in the music video. Am I lame for not even knowing what the music video looks like?

Oh well. Last band show of the year. Solid job, by all! 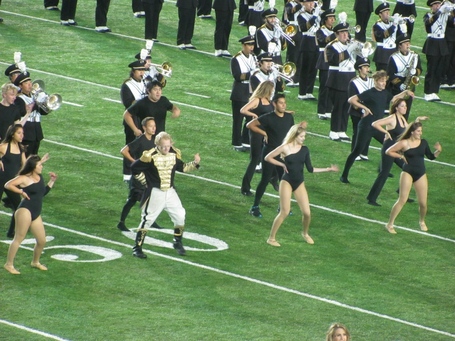 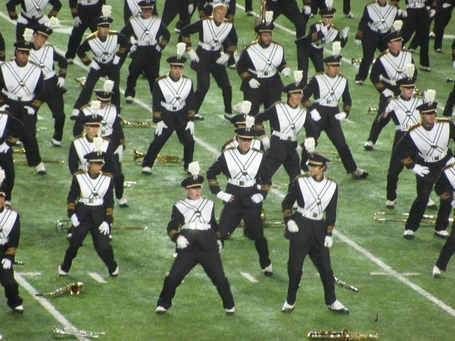 If I could take a moment to reminisce,I really love that scene in the Simpsons where, well, I'll just C+P the lines:

Smithers: Here are several fine young men who I'm sure are going to go far. Ladies and gentlemen, the Ramones.

Mr. Burns: Ah, these minstrels will soothe my jangled nerves.

Joey Ramone: I'd just like to say this gig sucks!

Johnny Ramone: Hey, up yours, Springfield!

[the Ramones start playing a tune and singing "Happy Birthday"]

Joey Ramone: Happy birthday to you!

Joey Ramone: Happy birthday to you!

Marky Ramone: Hey, I think they liked us.

Smithers: But sir, those aren't the...

That bears no real relationship to the band, in any way shape or form, but I want you all to enjoy the internal laughter I've had these last few days just remembering that great Simpsons episode. 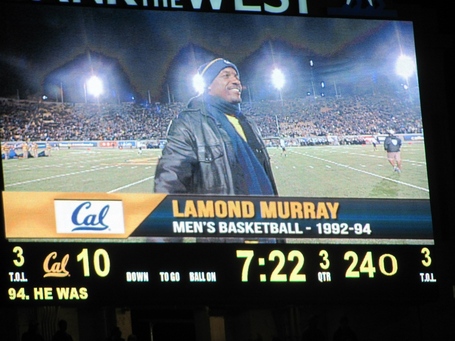 And Stu Gordon! He's given a lot of money to Athletics, so I figure he should make it into the photo essay. 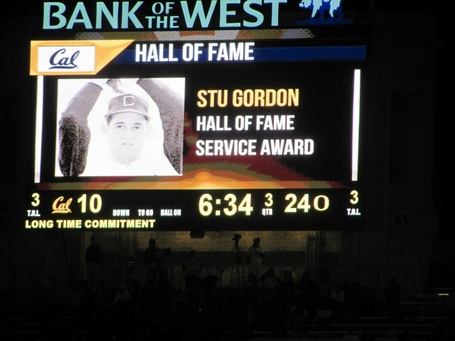 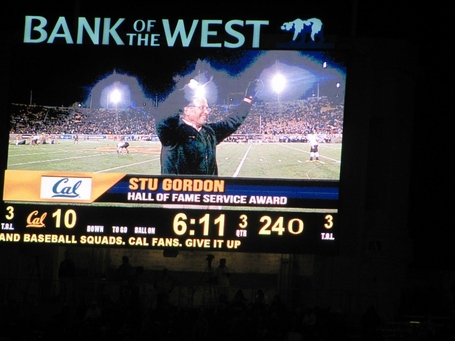 Then, they had a woman try to kick a field goal. She actually did pretty good, mind you. What was funny was that they didn't have all the accouterments off of the field before the team came running out. 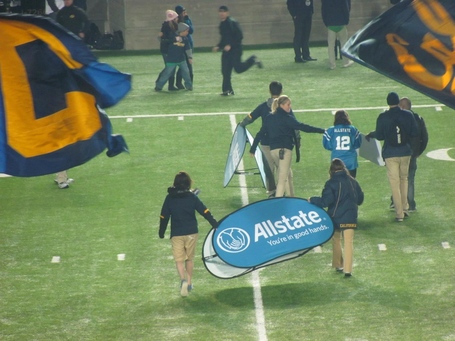 Unfortunately, there was no mid-field collision! BOOOO! 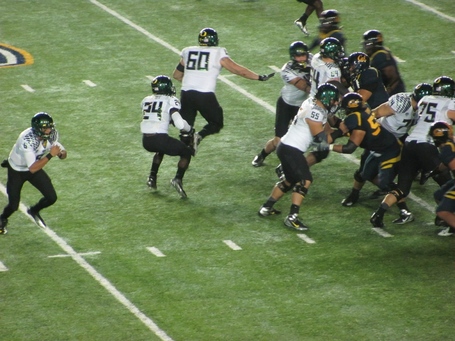 I now have no recollection of what the topic here was and the subtitles provide no real insight here. Throughout the season, the subtitles were like 75% accurate. For things said live, I can understand why it might be a bit tough to keep up. But for pre-packaged videos (probably filmed over the summer), I don't understand why it can't be perfect. 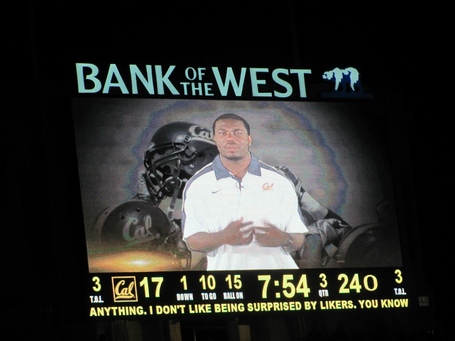 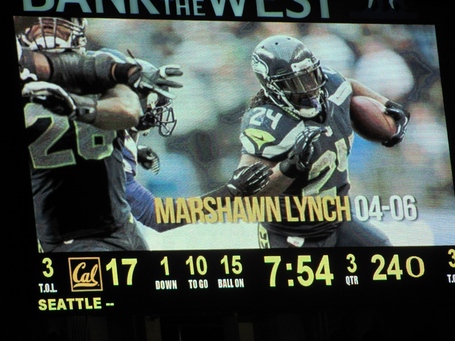 Cal had a moment where it looked like we might actually win the thing. We were only down by 7! Then, Oregon scored like 5,000 unanswered points. This photo reflects that a lot of the Cal fans had left early. But the Oregon block was still pretty consistent. The rest of the stadium was gloomy except for one infested area. 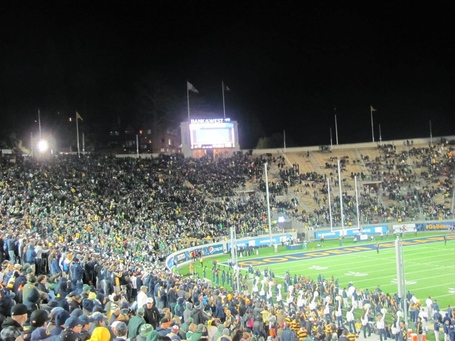 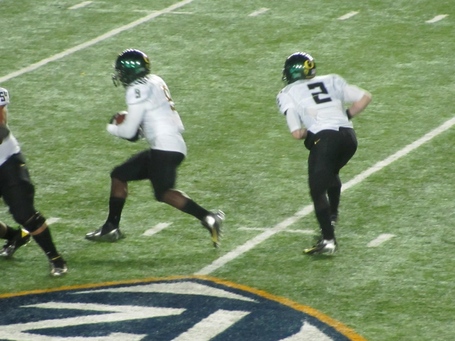 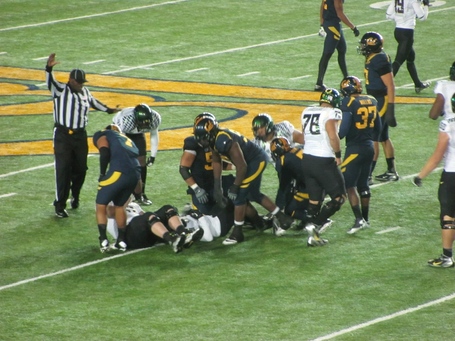 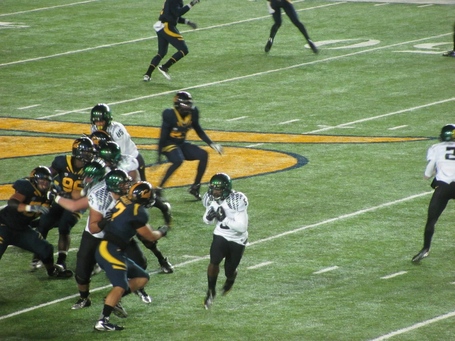 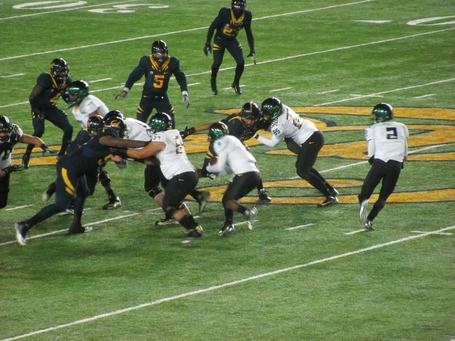 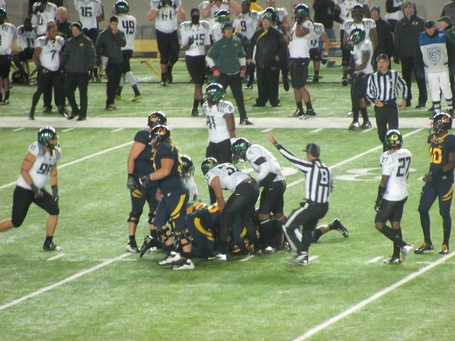 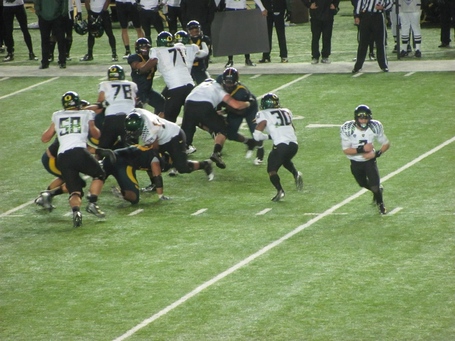 And the game was over. I had talked about being interested to see this Oregon offense. I know that they dropped 59 on us, but it didn't FEEL like it was 59. Probably because they scored most of it at the tail end of the game. Probably because for most of the game, Cal made them work for it quite a bit harder than most of their other foes (which is great!). It wasn't the effortless destruction that I thought might happen after the USC game.

And that is good news! 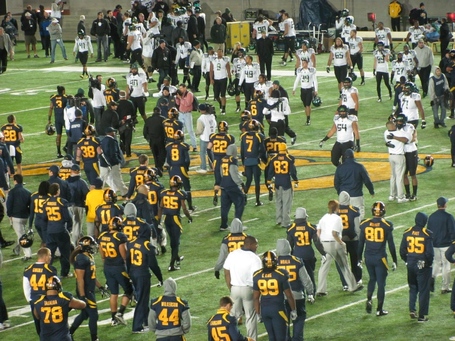 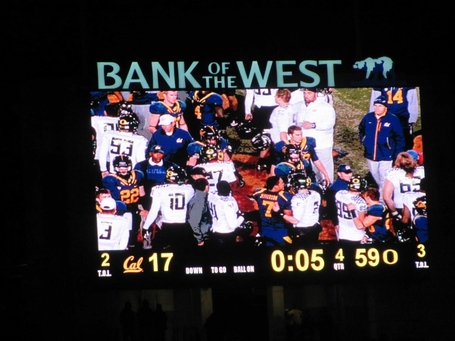 Goodbye, Memorial. See you in 2013. May we win more than 2 home games that year. GO BEARS!