It was so cold!

Share All sharing options for: Cal v. Oregon Photo Essay I: First Half

Well, then. That was a game. It occurred. And that is about the extent of my football knowledge on this one. I don't know much of the Xs and the Os. All I know is that if the Athletics Department expanded the visitor's section with the express intent of ensuring a huge block of Oregon fans would show up, well, guess what?

Even though the visitor's section would be pretty empty for all the other games (even Stanford had to return some tickets), it was jam packed full of our 2nd favorite Green And Gold fans. Even when Cal fans wouldn't necessarily be in their seats (generally early and not quite as late in the game as one would hope), there would be an unending block of Oregon fans. They showed up and were loud. 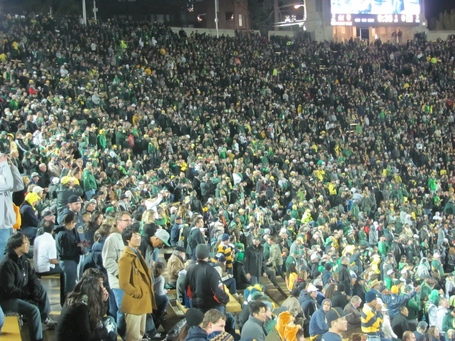 Here they are in all their green and gold glory!

It got freezing cold even before the game started. I had to head over to the student store to buy some Cal-themed gloves (only $13 after my California Alumni Association Lifetime member discount!). It felt kind of like the Big Game last year, but thankfully without the rain.

And here is the Oregon offense below. Not sure this photo really captures it (and remember, you can make all the photos larger by opening them up in a new tab), but the helmets looked like Christmas ornaments. 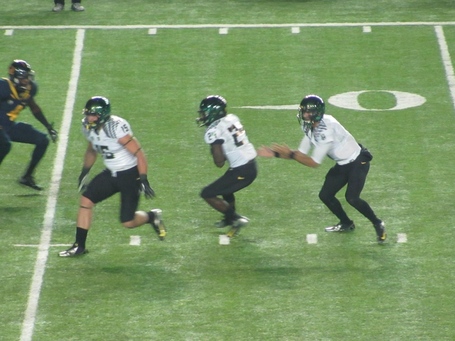 And here is Bear Growls, where three young children try to scream a bear growl as loud as possible. Then, two are shamed, while the other is declared the winner! Teaching them about real life! 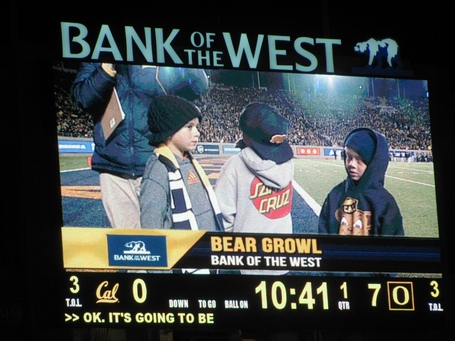 They brought out the 1991 football team for the fans.

The designation of the 1991-1992 football here confused some friends of mine. They called it that, because Cal took on Clemson on January 1, 1992 in the Citrus Bowl. I think a lot of people have forgotten that. This 1991-1992 team was one of Cal's best teams ever. 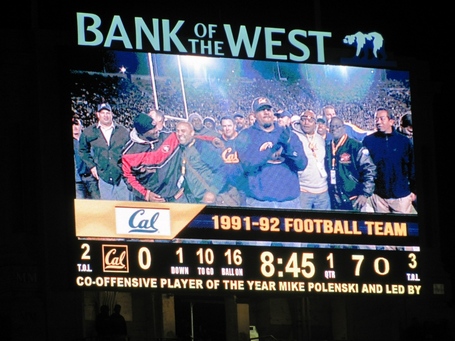 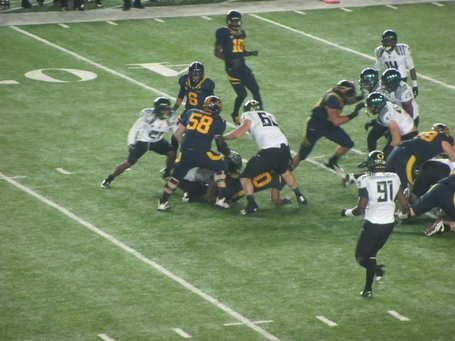 A big fight broke out on the field after one play. I couldn't quite tell exactly what started it. It was a huge mess of players, some trying to get at others, some holding others back. A bunch of people ran onto the field, some to help with the fight, others to try to calm it down. When things separate, I saw Coach Gould escorting Chris McCain off of the field. Not sure what McCain's role in the fight was.

He has been very passionate and is an excitable player. It is not difficult to see that potentially turn into a fight. 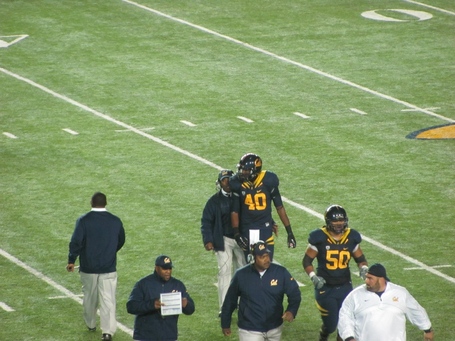 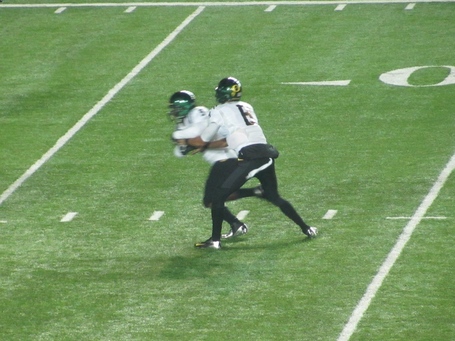 Cal honored Cal Veterans during the game. Right prior to this the Micman (forget which one) started a "Hey Alumni Go" chant. Then, when he realized that they were honoring the Veterans, he tried to stop it. But it was too late! The chant had a mind of its own and just kept going and going despite his ever increasingly desperate pleas to stop. 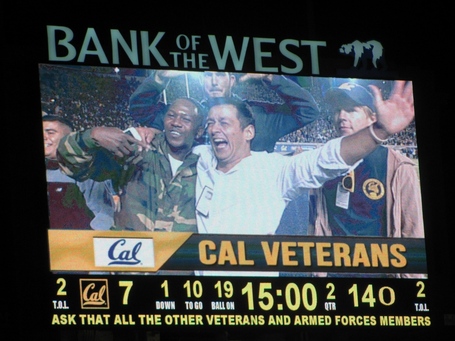 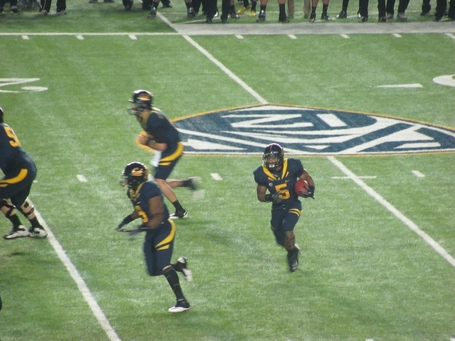 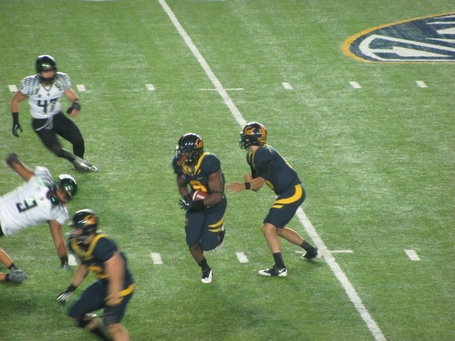 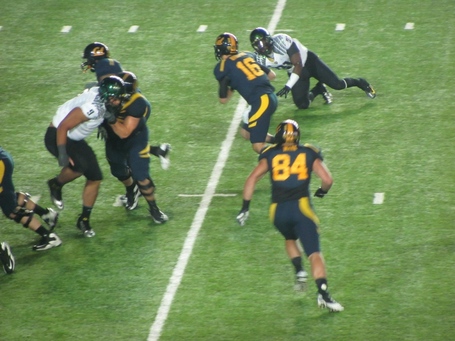 As Hydro has taught me, this is called a Check With Me. I wish they would check with me, though. I have so much to offer them! But they never do. Probably out of spite. 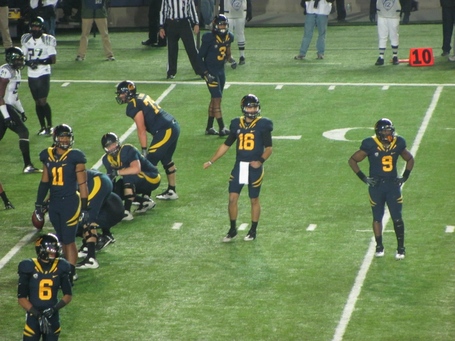 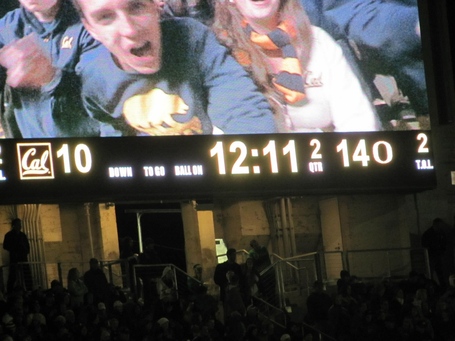 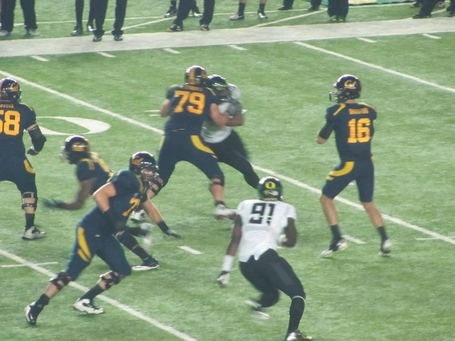 Cal actually played Oregon really well in the first half. The halftime score was 10-24, but the game was closer than that.