A Golden Spotlight on Cal Football vs. UCLA

After struggling against several other spread offenses, how did Cal's defense put the clamps on the Bruins prolific attack? And was the #FreeBigelow campaign finally successful?

Share All sharing options for: A Golden Spotlight on Cal Football vs. UCLA

It's so much more satisfying to review the game film after your team actually shows up and displays some football skill to go along with heart and effort. Perhaps even more so when the game was a must-win season-saver that conveniently comes against the pretentious upstarts from the southern annex.

And there were so many plays to chose from. Well-executed offensive touchdown passes. Defensive interceptions. (The herp-derp INT at the end of the 1st half just barely got vetoed. It wasn't the UCLA receiver's fault that he stopped short; that's what happens when you only practice on an 80 yard field, amirite?)

I almost did a feature exclusively on Eric Stevens and his blue collar lead blocks, 2nd effort dive plays, and nifty hands as an outlet receiver.

But after getting lit up by a variety of spread attacks, it's only fair to give Coach Pendergast and the Cal D their due:

UCLA comes out with 21 personnel, one TE lined up in the slot, two running backs, and 2 WR. Cal is in their 2-4-5 nickel package and look to be lining up in a Cover Two zone. Kendrick Payne(#96) and Deandre Coleman(#91) are the two down linemen flanked on the line of scrimmage by Brennan Scarlett(#17) and Chris McCain(#40). 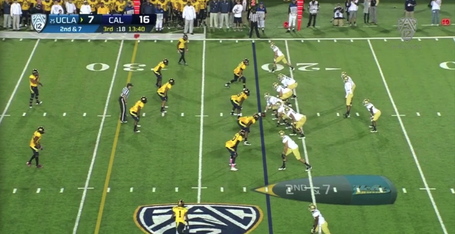 Right before the snap, Franklin goes in motion by sprinting towards the sidelines. It looks like they're running the quick swing pass again. Both Avery Sebastian((#4) and Jalen Jefferson(#7) aggressively move towards the line of scrimmage and show blitz. 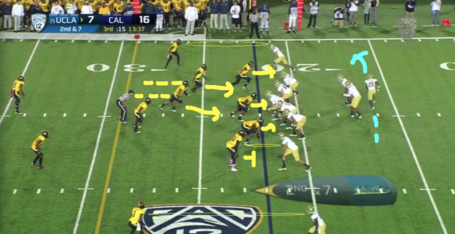 It's a zone blitz. While Scarlett, Payne, and Coleman rush, McCain drops back in zone coverage on their TE. Sebastian attacks the B gap which forces the UCLA fullback to dive at his feet and cut him. Jefferson attacks the B gap and occupies the attention of both their RG and center. Coleman gets a huge push and demands a double team from their LG and LT. This frees up Payne in the middle. Meanwhile, Scarlett is beating their RT to the outside... 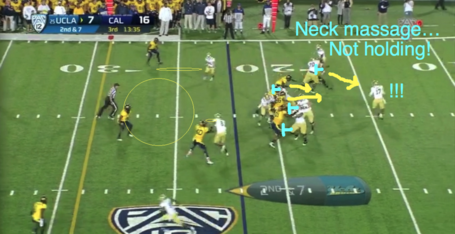 Scarlett's speed rush forces Hundley to step up. He also has nowhere to go because good zone coverage by McCain and Forbes have their TE bracketed (We can do that?) while Kam Jackson has their WR in his sights. With a free run at the QB, Payne puts on a closing burst. 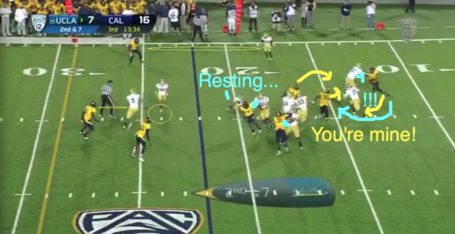 Payne drags down Hundley with a late assist from Sebastian. While the Bruin tailback decided to remain on the ground for the entire play, Sebastian didn't let having his legs cut stop him from finishing. This play sets up a 3rd and long which ultimately forces UCLA to go three and out on their first drive of the 2nd half. Effective blitzing + disciplined zone coverage? The young D is growing up. 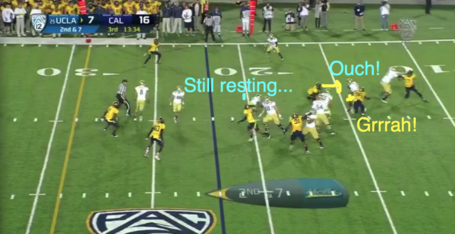 This time, UCLA goes with 11 personnel. They have one TE lined up in the slot, three WRs and one tailback. Cal is again using their 2-4-5 with a Cover Two Zone look. It's Moala(#55) and Jalil(#90) as the down linemen flanked by Scarlett and McCain. 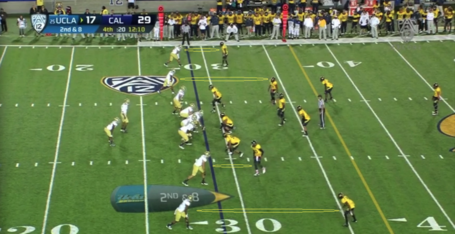 At the snap, Sebastian and Forbes charge forward and blitz while Jefferson stays home. It's another zone blitz with McCain dropping into coverage while Scarlett, Moala, and Jalil rush. 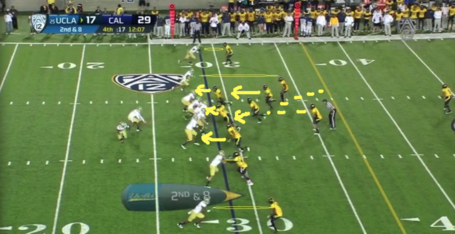 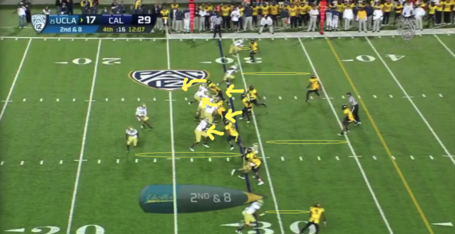 With a free run right up the middle, Forbes draws a bead on Hundley. McCain bumped their TE at the line, then stayed home to pick up the back out of the backfield. Jefferson quickly moved over to pick up the TE and prevented an easy check-down throw. The other Cal pass rushers are relentless. Scarlett and Sebastian both beat their men one on one. Tiny has to beat two guys...but powers his way through both of them. 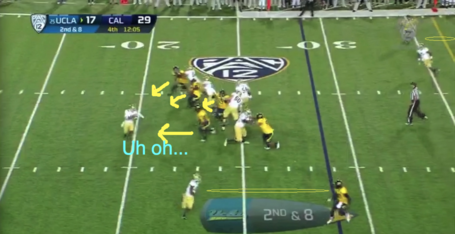 Hundley tries to scramble, but can't get away from Forbes. While dragging him down, Forbes raises his right arm and takes a mighty swat at the ball. 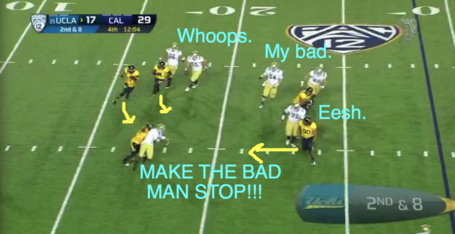 The ball flies free! It rolls right to Scarlett...but he can't scoop it up. The ensuing scrum is wild. 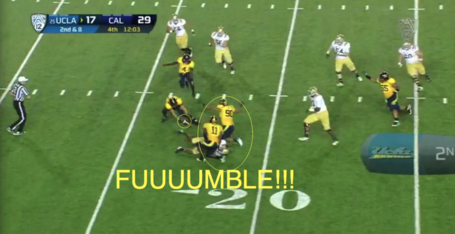 Sebastian dives for the ball, but has it squirt away. Bodies fly everywhere, but the Bruins retain possession of the ball.

It's another well-executed blitz complemented by great downfield coverage. However, it's truly disturbing that shamelessly copying our colors, mascot, and stealing our fight song were not enough for the southern annex; they apparently also felt the need to copy our offensive line blocking schemes. Is there no end to their perfidy?!?!

This sets up a 3rd and forever. UCLA tries a long pass, but Kam Jackson picks off the overthrow. Maybe they should have tried a draw play, eh? 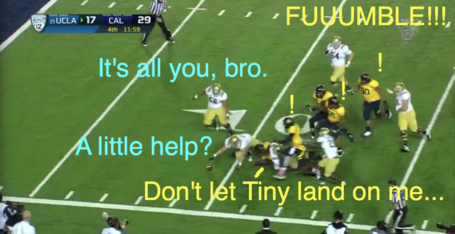 Cal comes out with 11 personnel, one TE, one TB and 3 WR. However, they go empty and line up both their TE and TB as receivers. Prior to the snap, Treggs talks to Bigelow and makes sure that he's lined up properly. 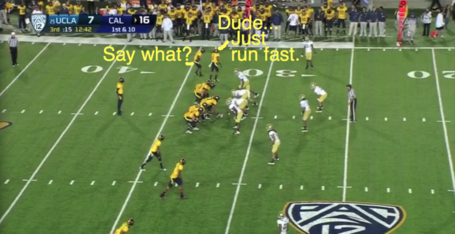 Thanks to Treggs, Bigelow gets set. This is key in avoiding an illegal procedure penalty. 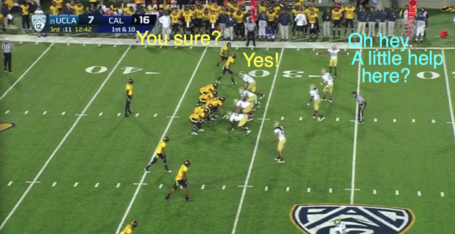 At the snap, Maynard immediately looks to the right. His eyes force the linebackers to flow towards Cal's receivers. Meanwhile, the UCLA pass rushers are in the process of blowing past Cal's Oline. Because this happens pretty much every down, THEY SUSPECT NOTHING! 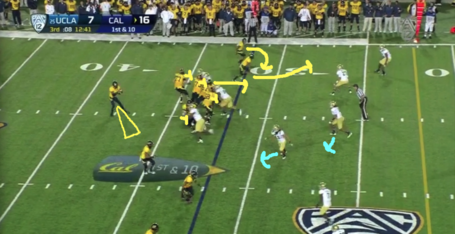 Tyler Rigsbee properly executes his cut block and puts their DE on the ground. Bigelow pulls up in a quick hitch while Treggs continues downfield. Meanwhile, Schwenke, Adcock and Jordan Rigsbee have all moved down field and are looking to take out defenders on the second level. 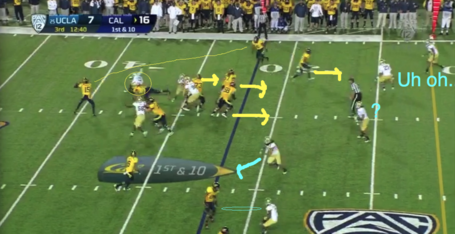 Adcock picks off their linebacker. But the key block is made by Schwenke who puts their safety on the ground. Treggs moves downfield and engages their corner. 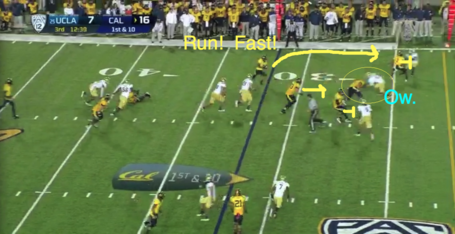 Despite giving up both height and weight, our true freshman wide receiver is more physical than their senior corner. Hester isn't able to disengage himself and gives up the edge to Bigelow. That is unwise. 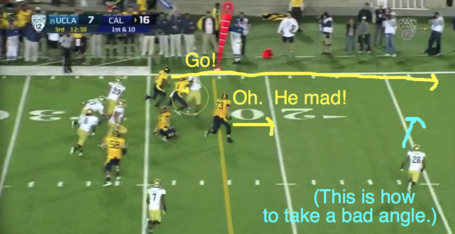 Their other safety has an angle. Or so he thinks. All it means is that he gets a close-up view of Bigelow's turbo burst all the way to the endzone. Rigsbee tempts Juju by celebrating fifteen yards early. 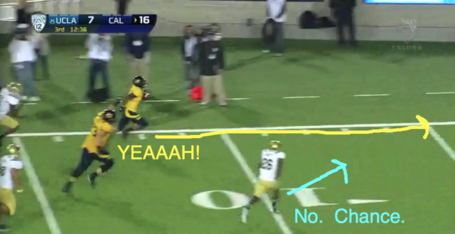 Juju isn't fast enough to stop Bigelow either. Fortunately, those yellow pieces of color on the ground are airplanes, not flags. TOUCHDOWN BEARS! 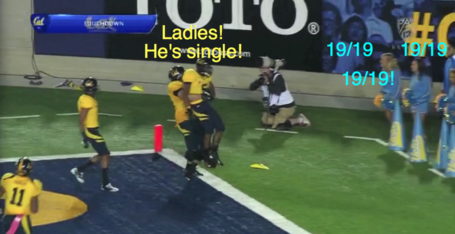 Courtesy of Redonkulous Bear, here's the whole play: (Click on the image below to make it play)

I don't know where this team was the past several weeks and I have no idea what this ultimately means in the long run. But for now, I'll take it. Let's keep the momentum going all the way up to the Palouse. Go Bears! Beat the Cougars!