It's a smorgasbord of Cal photos here! Let's look at some halftime and second half action. GO BEARS!

When we left off part one, we had just finished off a surprisingly better first half. Cal was up 16-7 heading into half. UCLA had started off strong, picking off Zach Maynard, but Cal had kept UCLA mostly down after that.

But after the teams ran off the field, it was time for the re-dedication. Memorial Stadium was originally dedicated to those who served our country during World War I. Below is a photo taken by valued reader CalBear81 showing that original dedication: 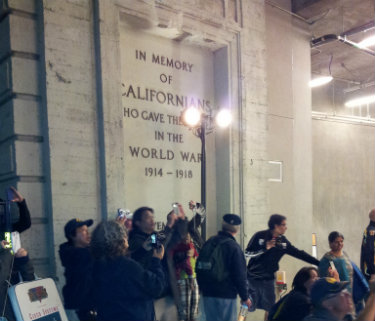 For this dedication, there was a ceremony on the field.

Thanks to valued reader WifeIsATroj, we have some video of part of the ceremony:

Firstly, everybody held up their card for the stadium wide card stunt. 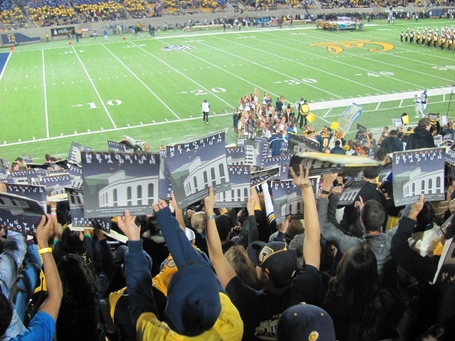 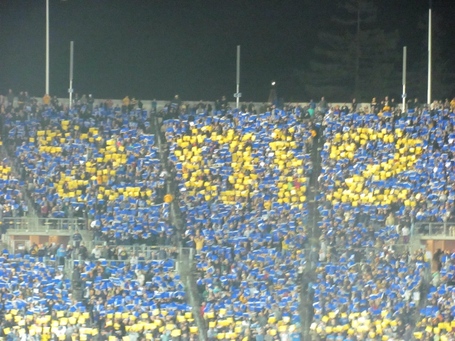 There was also a giant American flag being flapped up and down by many people. It looked like it'd be fun to lay on top of and be thrown up and down on that thing. But is that disrespectful to America?? 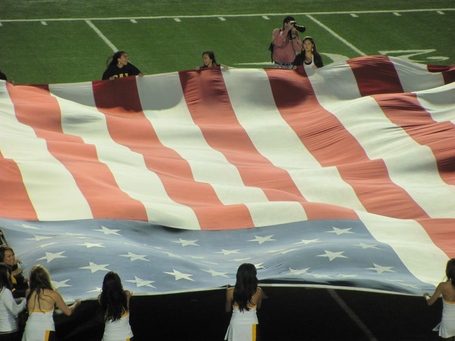 As you can see in the video there, the Cal and UCLA bands played together, making the USA shape on the field. Sandy Barbour (who was running a bit late and had to come sprinting it to make her cue), Chancellor Birgeneau, and others gave speeches about the re-dedication. Then, Oski revealed the new dedication which is the photo at the top of this post (provided to us by valued reader CalBear81).

Then, cannons shot off blue and gold streamers, while the bands played. YAY! GO AMERICA! 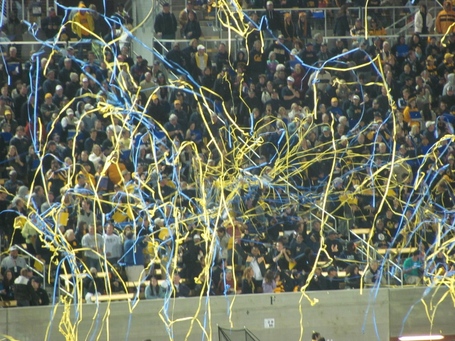 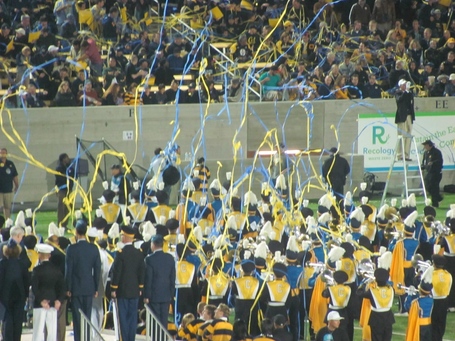 The 2nd half was all-Cal, all the time! Loved it. 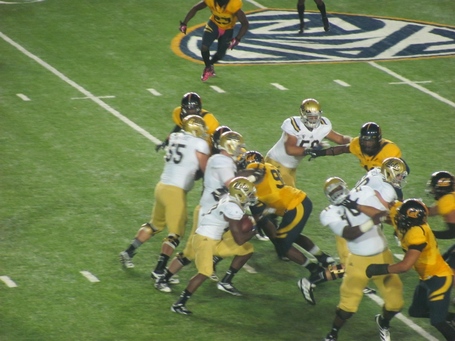 Cal was getting a lot of pressure on UCLA. Tons of great sacks! 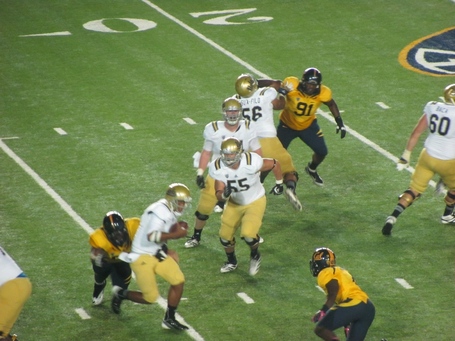 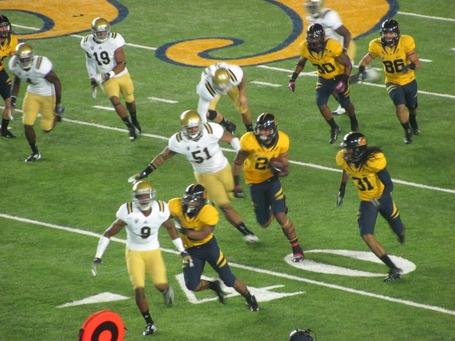 A video of the pro Cal Bear for the week, Chris Conte! 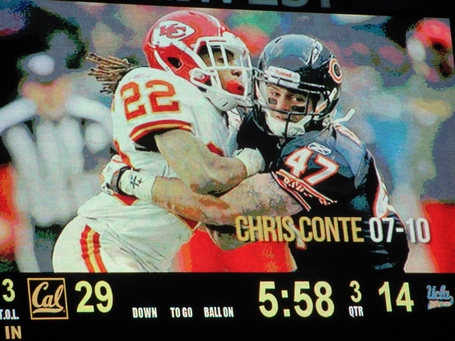 A lot of this by UCLA in the 2nd half! 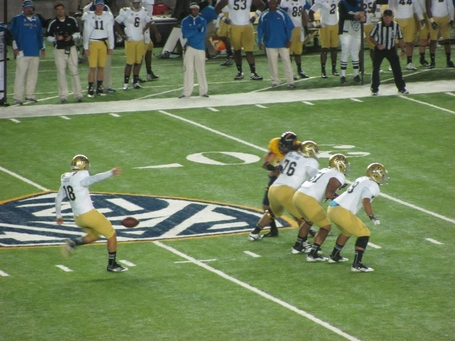 I was chewing UCLA gum, but that was not my fault! And it was the ONLY UCLA colors I had on me. 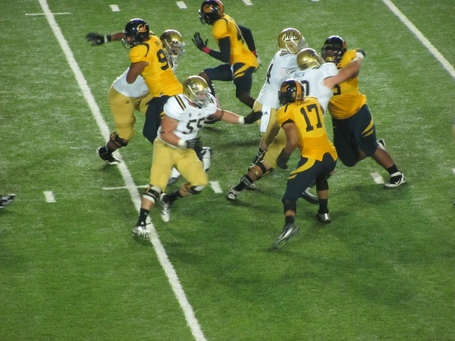 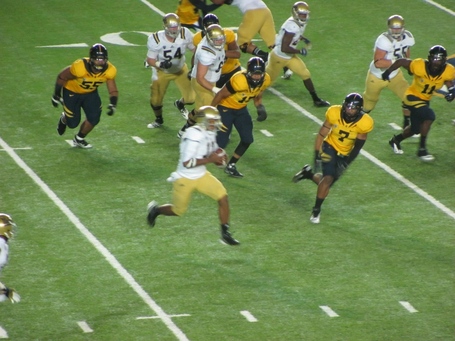 "We may leave early. It's like UCLA is being paid to throw the game. Embarrassing."

Not only were they planning to leave early, they couldn't even credit Cal with playing well. I responded with "Classic UCLA fans."

And that wasn't even the worst part. Apparently, a fight broke out somewhere in the UCLA section:

And the exodus is mostly complete: 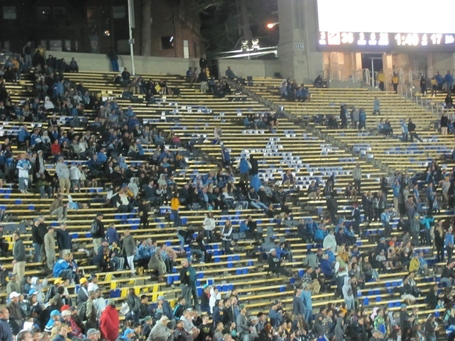 Note that there is a Cal Dance Team AND a Cal Cheer Team this year. The Cal Dance Team is what you've seen for many, many years doing their various dance movies up on the stage in front of the student section.

I believe that this is the Cheer Team doing your usual array of football cheers. Throwing people up in the air, standing on each others' shoulders. Good stuff all the way around! 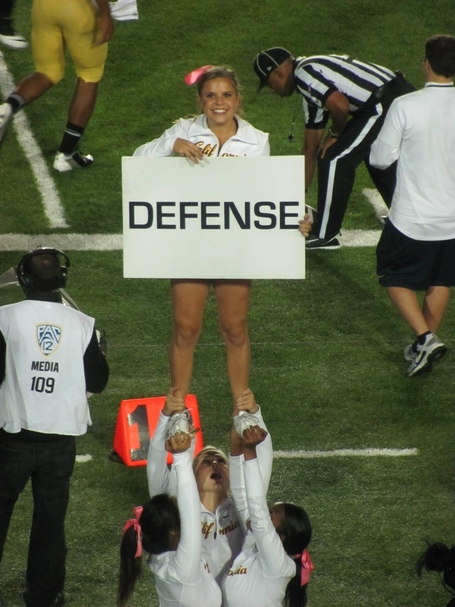 When the game was over, the Cal team rushed excitedly onto the field. I wasn't sure if fans were going to rush the field. They did not. The team seemed really happy and they should be. It has been a frustrating season for them so far and this win was as much cathartic for us as it was for them (probably more so for them!). 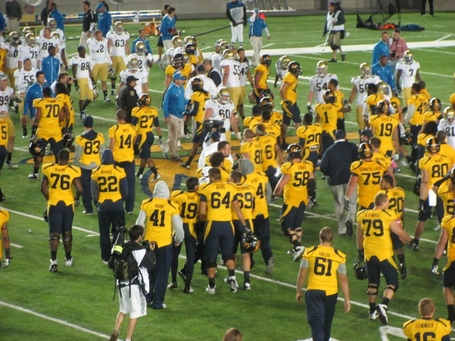 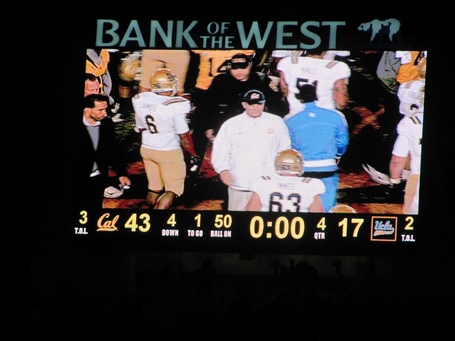 After celebrating in the middle of the field, the team came over to the student section. The percussion was playing several different rhythms and everybody was dancing around. 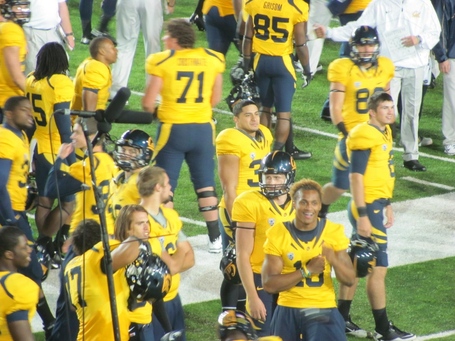 May the good times roll! After everybody left the field, the band did their standard post-game show (including running circles on the field for no clear reason). 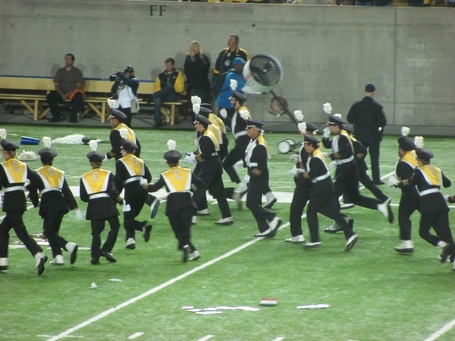 And then it was time for march down! 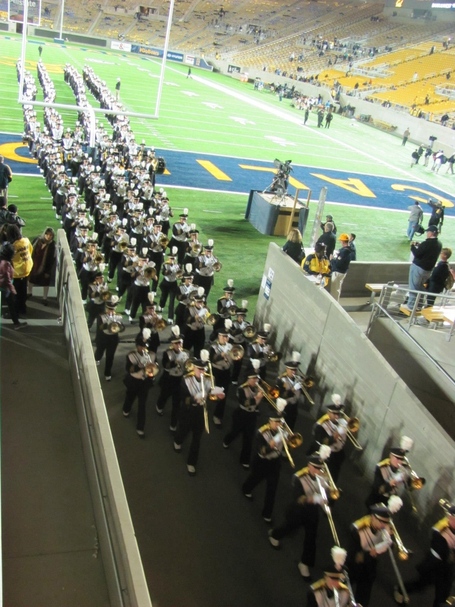 Great game all around. Two thumbs up! May we have this level of success against all our opponents. The atmosphere was great, the re-dedication was great, and it is ALWAYS great to beat the baby bears. GO BEARS!