Doesn't it feel good to look at photos of a win?? How unanticipated!

Share All sharing options for: Cal v. UCLA Photo Essay I: First Half

Now, THIS is what I call Cal football. The other team that we've seen the last few week, that was clearly California University Of Pennsylvania Football (Go Vulcans!). This team, this is the team that I knew was hiding in there somewhere. What we can do to see it every week???

This was also the re-dedication of Memorial Stadium. It was first dedicated decades ago in honor of those who gave their lives in World War I. I'll have more on that later, but there would be a joint band performance, the return of Garrett Cross, and general awesomeness during the entire game! Valued Reader CalBear81 provides video of the pre-game action including video on the full stadium card stunt in its larval stage:

As you can see from the photo above, the stadium is just gorgeous lit up. This was Cal's first home night game of the season, so it was unclear how the experience would be. It may be the UNHOLY smack down Cal just laid down on UCLA, but the atmosphere was great.

The game did start off a bit rough as Zach Maynard threw a pick early into the game. Fans, expecting the worst, started to get a bit restless.

Please note you can make any of these photos larger by opening them up in a new tab. Thanks. 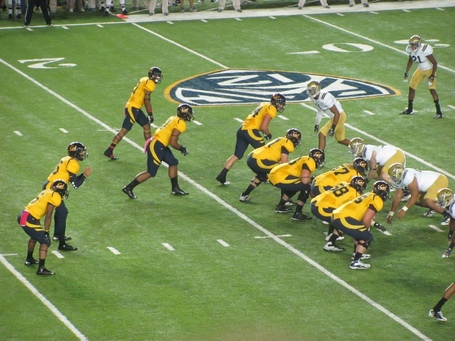 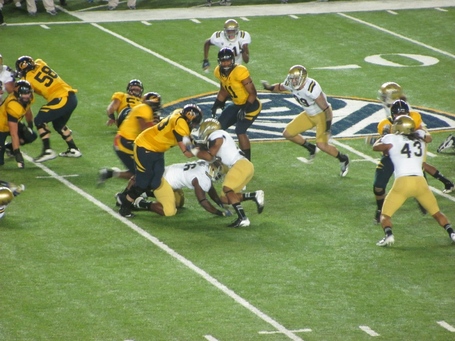 When UCLA quickly capitalized turning that turn over into points, I am sure many fans were like me, imagining a rough loss to the baby bears. Although, I did have a rather hilarious interaction with a friend of mine new to football. Although ostensibly a Cal fan, he started clapping enthusiastically when UCLA scored. I scolded him for cheering for UCLA, but he became confused.

He thought Cal had scored as the touchdown area clearly had "Golden Bears" written on it! He also felt it would have been helpful if the football was neon colored or glowing, so it'd be easier to figure out what was going on. Fox hockey executives from the 90s everywhere turned to us and said "THIS IS WHAT WE'RE SAYING, PEOPLE!"

Fortunately, that initial TD was the high point for the powder blues. Although they held the lead for a while, Cal slowly moved past them and never quite looked back. 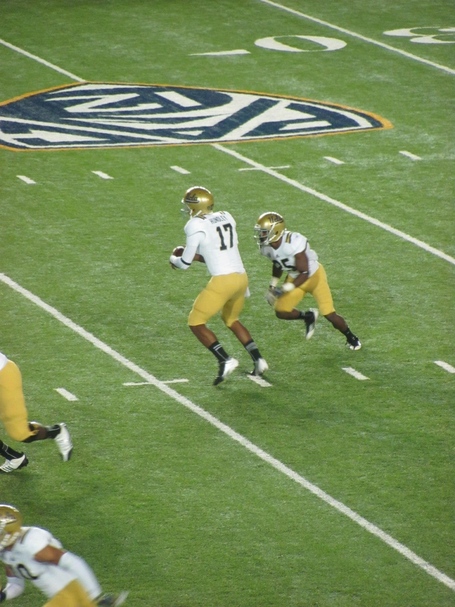 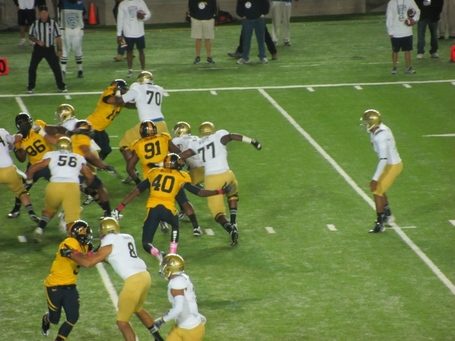 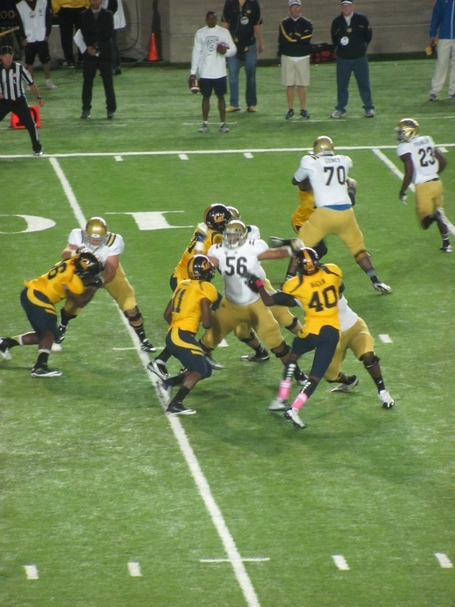 Cal actually added captions to the big screens, so you can hear what people are saying. I had complained after pretty much every home game about it. I didn't necessarily seek captions for what the play by play announcer was saying, although that does make a lot of sense. I was more talking about when they have the players on the screen talking about this thing or that. And, actually, when they showed those videos the captions either weren't working or were working wrong. So, there is that. But, baby steps! 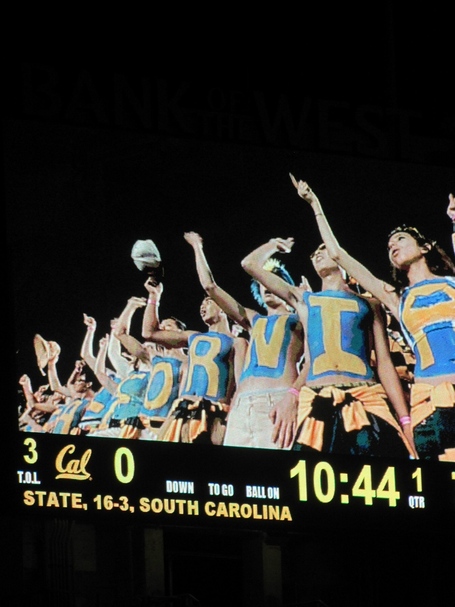 Isi Sofele takes the ball around the end here. 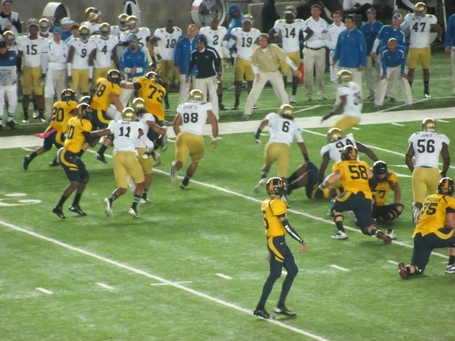 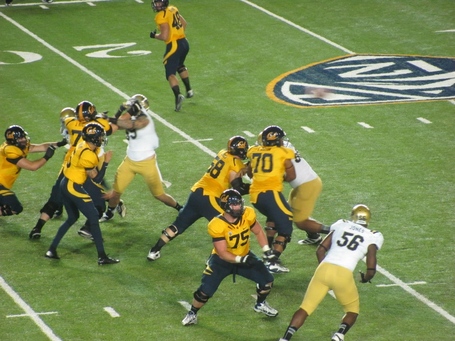 I really don't know who the UCLA QB is throwing to here. It looks like he is gonna nail the ref in the crotch. Behind the ref, some UCLA players are holding giant paper signs. One has the Olympic rings, while another appears to have an In N Out logo on it. You'll notice no Five Guys logos anywhere.

That is because it is scientific proof and pure mathematics that In N Out is superior to Five Guys! THIS IS NOT ARGUABLE, PEOPLE!!! 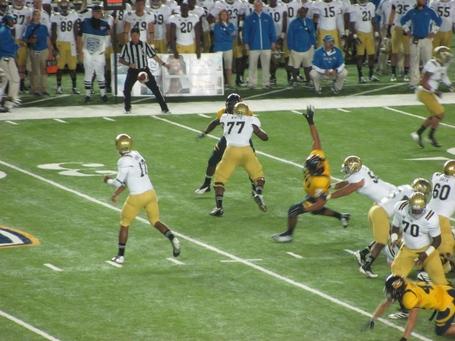 Maynard gets the ball away just in the nick of time! 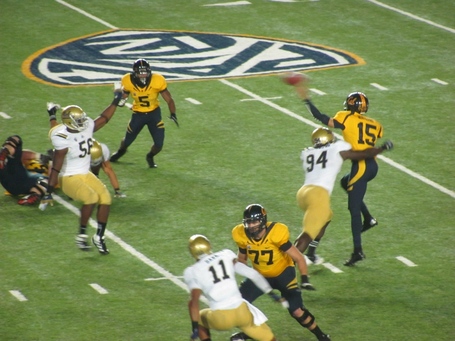 Thanks to HydroTech, I know that these moments are called "Check-With-Mes." You have now exhausted the extent of my knowledge about "Checks-With-Mes." 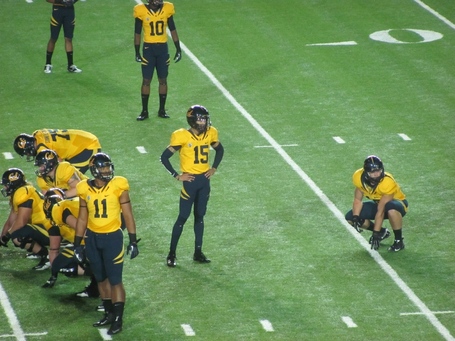 Former Cal footballer and rugger, Garrett Cross. This guy not only played well for two Cal sports, but he was the athlete that Coach Tedford was scouting when he "stumbled" upon Aaron Rodgers at Butte CC. This fact alone makes Garrett Cross America's Great Patriot! 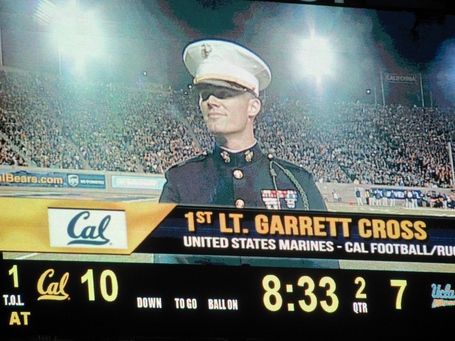 The score there is 10-7 Cal. When Cal scored their first TD (a C.J. Anderson run), I tried to get a photo. But just as I was trying to get the photo, a friend excitedly grabbed my elbow, making it all blurry. I was a bit pissed and said as much. My friend, showing perfect comic timing, said "And, sadly, that'll be your only chance to get a photo of a Cal TD, too." THANKFULLY, HE WAS WRONG!

Keenan Allen didn't slip a single time this game, I think. He was looking great out there. 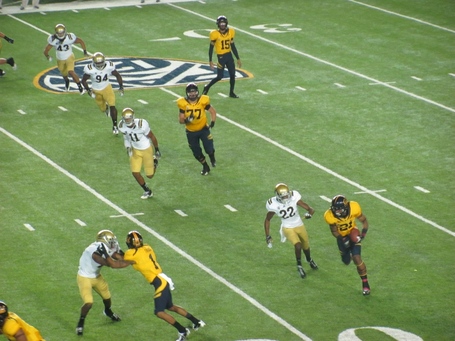 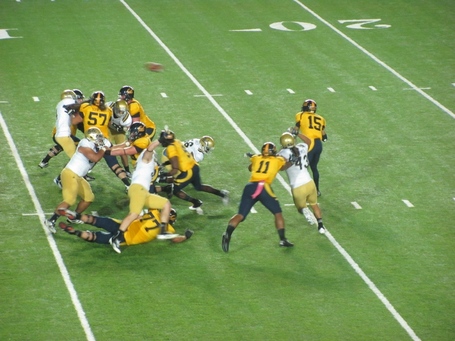 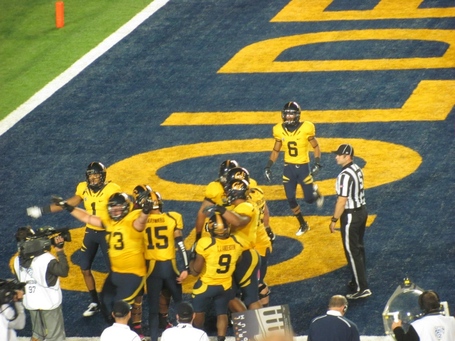 Cal was playing well in the 1st half, but it was not quite yet the blowout the final score would indicate. The score was 7-3 in favor of UCLA at the end of the first quarter. Cal would score 2 TDs in the 2nd quarter, but failed to score the extra point on the latter (blocked by UCLA). So, the score was only 16-7 going into half. We can breathe easy now, knowing that Cal dropped over 40, but at the time, hope was slowly building.

And as I noted in this tweet, that is always a worst case scenario:

Bad news.I have hope we could win this game.Now it will suck even more when we lose!Bane was right!

This guy had a unicorn head on. Ya, I don't know why, either. 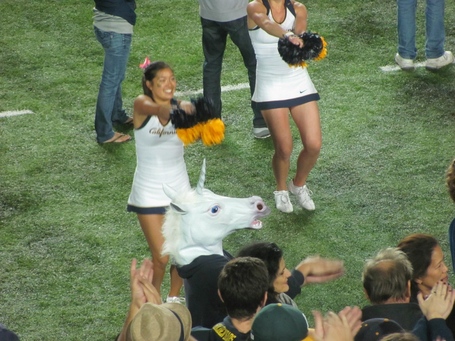 In the part II, we'll look at some halftime fun and the 2nd half, which was pretty much all-Cal, all the time. GO BEARS!