Like a Phoenix rising from Arizona, the Bears came back to life with a stellar performance against UCLA. Jeff Tedford talks about what it took to win and how to build on the momentum.

For the first time all season, there is reason to be thoroughly pleased with Cal's performance. Of course, we're not the only ones happy about the win. The players and coaching staff are glad the team put together such a solid performance. Tedford talks about what went right and how the team can ride the momentum into Pullman.

"Like I said last week, the belief and trust is still there with our team. I thought some guys stepped up big tonight. Kameron Jackson came in and played a great game. We got some turnovers; that is key. We managed the game really well. Coach (Marcus) Arroyo called a great game; he kept them off balance. Still too many penalties, but we'll continue to work on that. I am really happy for our team and our coaching staff."

On QB Zach Maynard:
"I don't know what his stats were; he didn't incomplete very many. He managed the game really well. When he had pressure he didn't force it. That guy made a great play on the interception. One of the touchdowns to C.J. (Anderson), he saw the blitz coming and made an adjustment on the slant. He really managed the game well and was on target with a few big throws."

On the first conference win:
"(The win) was much needed. It has been a tough few weeks. That is definitely going to give us a boost. There is still a lot of football to play. We got banged up a little bit tonight, but not too bad. It was nice to see Richard Rodgers come back finally. The thing we are talking about in (the locker room) is that we can't wait to get back to work on Tuesday. Even though this is a satisfying and gratifying win against a good football team, we still know there is a lot to work on."

On Cal's defense:
"Clancy (Pendergast) and the defensive staff did a nice job. We are pretty thin at the defensive line. Guys just stepped up and played really hard. It was a gutty performance by our team. It is fitting being Joe Roth Game. We watched his video last night, and that was really inspiring for the team. All of our older guys understand who Joe Roth is; but we show it every year because it is a great inspirational message. He talks about character, and don't quit. That really brings a lot of emotion out of our guys."

Hopefully the team can build on this and ride some momentum into Pullman. If not, this win will be for naught. 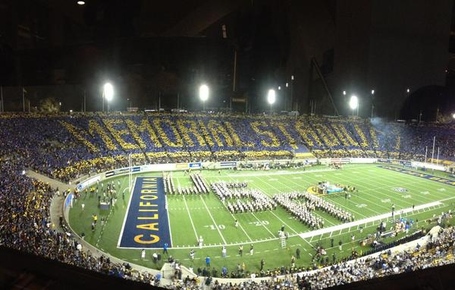