Q & A with Ryan Rosenblatt, Manager, Bruins Nation on the Bruins of the University of California, Los Angeles

Welcome to Week 6 of the season. Today, we talk to Ryan Rosenblatt of Bruins Nation, SB Nation's UCLA blog. Many thanks to Ryan for volunteering his time to respond to our questions. In the first night game at New Memorial Stadium, we welcome the Bruins of the University of California, Los Angeles. Fresh off a new coaching hire and an early season upset against Nebraska, the Bruins are looking to win in Berkeley for the first time since Cade McNown was a college quarterback. The Bears are eager to continue their home dominance. How do you think the Bears will do this week? Go Bears; see you all on Saturday!

Share All sharing options for: Q & A with Ryan Rosenblatt, Manager, Bruins Nation on the Bruins of the University of California, Los Angeles

1. How are UCLA fans feeling about the Jim Mora era after a few games here?

So far, so good. It hasn't been perfect and the program had a LONG ways to go when he took over so it was always going to be a long-term project, but things are going well. The offense looks like, well, an offense, which is completely new for UCLA and the defense is doing a better job of playing to the strengths of the players.

So step one has gone well. There are a lot of steps left and there are some problems, but it's definitely going in the right direction. 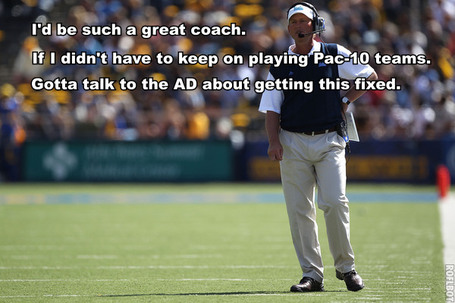 Of course, we all know how this turned out.

2. When did you definitely know it was over with Rick Neuheisel?

The Arizona game last year really wrapped up Neuheisel's tenure. Getting blown out in Tucson and fighting on the field? That was it and even the staunchest Neuheisel supporters were out of reasons to keep him.

3. What is more important for UCLA's offense: Success running the ball with Jonathan Franklin, or success passing the ball via Hundley's arm?

If you would allow me to cheat (since you did specifically say Franklin) and count the screen game and quick swing passes as part of the running game since it kind of is an extension of the running game, I'd say the run is more important than the pass. There is so much versatility in the running game and it is able to utilize a bunch of different players besides Franklin that it really is great. Maybe most importantly, it also opens up the play action pass and gives the offensive line some more confidence in pass protection, which is vital because that front five can have trouble at times.

4. UCLA is 4th in the nation in forced turnovers. Is that high number a fluke, or a realistic representation of the defense's ability to take back the ball?

It's definitely fair. The Bruins have a lot of great athletes defensively and the scheme has them moving a lot in space, which is going to result in a lot of turnovers. When you have guys like Tevin McDonald and Anthony Barr to pick passes off and force fumbles, you're going to take the ball away.

That approach does make the Bruins susceptible to the big play, though. They are so aggressive and active that sometimes they take themselves out of position. 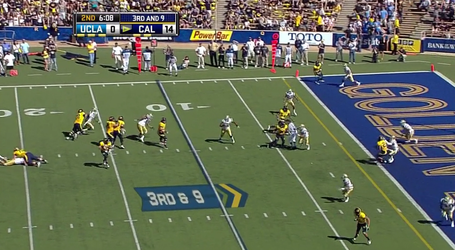 Kevin Riley went 3-0 against UCLA. He is seen here throwing a touchdown pass to a freshman phenom - Mr. Keenan Allen.

5. Do you think Cal's long home winning streak against UCLA have any bearing at all in this game?

Yes. No. Maybe. My brain says no and that what happened two, four, 10 years ago doesn't matter to a bunch of players who weren't around for a lot of those losses. But as a fan it grips you and you remember. You convince yourself Strawberry Canyon is an awful place and you are cursed there.

So no, I don't think it will have any bearing on the game. But it might.

6. Where do you foresee your program in 5 years? Who will be the head coach? What significant accomplishments and disappointments do you think you'll have witnessed?

This one is tough because while I like what Jim Mora has done so far, it has not been long enough that I have a really clear idea of what to expect, but let's give it a shot and I'm going to be optimistic:

Mora will still be the head coach in five years and UCLA will have been to a Rose Bowl. Dan Guerrero will have been canned as athletic director and his replacement will have actually built a full-size practice field. The program won't be all back because a decade-plus of suckitude takes a while to come back from so the Rose Bowl won't be regularly full, but UCLA football will be something to be proud of again and the arrow will be pointing up.

7. Will UCLA's DLine be able to take advantage of Cal's OLine?

I think so. The defensive line has shown flashes of being able to get into the back field with Datone Jones leading the way, but more than anything they have done well to occupy linemen. That gives someone like Anthony Barr the chance to come off the edge from his outside linebacker spot and pressure the quarterback, while the rest of the linebackers are often running free against the run. 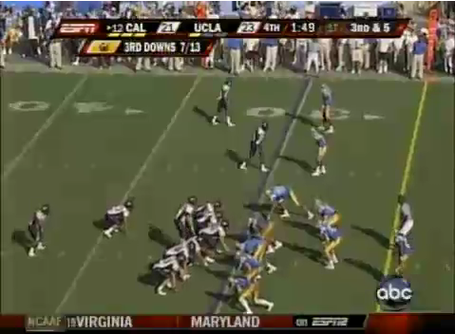 5 years ago, Cal drove down the field against U.C.L.A. in the 4th quarter of a close game. The Bears hope to avoid a repeat of their nightmares in Los Angeles this week.

8. Is there anyone in the UCLA secondary that can match-up with Keenan Allen?

No. The Bruins' best cornerback is Andrew Abbott, but he's spent most of his time at safety, while Aaron Hester and Sheldon Price get beat repeatedly. The cornerback spots have been huge problems for UCLA and going up against Keenan Allen is not going to help that.

9. Is the buzz surrounding the football program coming anywhere close to eclipsing the basketball program?

10. Overall, how do you view the state of the Cal football program at this time?

It's obviously struggling and the expectations are higher now that Cal has the facilities to compete, but Jeff Tedford didn't forget how to coach. He can still keep the Bears' program where it has been. More than anything, at least from afar, it seems like Cal isn't 100% sure what they expect from their football program in this new facilities, new money era.